Zebras’ stripes have baffled biologists since Charles Darwin. Many hypotheses have been proposed regarding their purpose but, despite hundreds of years of study, there remains disagreement.

In an attempt to end the debate, researchers have pitted various models against each other and systematically analysed data from past studies. Their results reveal the one reason zebras have stripes: to ward off flies.

A handful of ideas regarding zebras’ stripes have found some support among biologists. One proposed that the dark and light bands change how air flows around a zebra’s body and helps in heat management, which could go a long way in the hot tropical areas that zebras live in.

Another proposed the stripes were used by zebras as a way of social interaction. They may use them to identify other zebras and for bonding as a group in the wild.

A third proposal suggested zebras used the stripes as camouflage. While stripes are clearly visible in the day, there some thought that it helped at dawn, dusk, and in the night.

All these ideas were shot down when tested rigorously. Two others, however, remained intriguing.

The first was that the stripes were used to dodge predators. It is called the “motion dazzle hypothesis”, and it suggests predators are confused by zebras’ stripes and cannot understand their movement. Research published in the journal Zoology in 2013 used a simulated visual system to show that zebra stripes do interfere with visual perception. But this is a difficult hypothesis to test in the field.

Martin Stevens at the University of Exeter has researched the motion dazzle hypothesis by getting human subjects to catch moving stripy objects on a computer. “It’s an artificial experimental system,” he admitted.

The second proposal was that stripes helped keep flies at bay. Zebras are especially susceptible to biting flies due to their geographic spread. These flies, which include the tsetse fly, stomoxys stable flies, and tabanid biting flies, are particularly prevalent in areas with high temperature and humidity – exactly the areas where zebras are normally found.

Bites from these flies can be nasty and, quite literally, draining. About thirty flies feeding for six hours on just one horse can draw as much as 100mL of blood. Usually the flies can number in the hundreds around one animal.

Zebras have shorter hair than other equids – the family that includes horses, donkeys and zebras – which may also increase their susceptibility to attack. Also, four diseases which are fatal to equids have been found in Africa. This could mean that investing in anti-biting defenses such as stripes is especially important for zebras compared to non-African equids.

It is possible that the dazzle effect acts on flies, rather than larger predators, and deter them from biting. “Stripes clearly have a number of functions,” Stevens said, “and these could be interacting in zebras.”

In the new research, just published in Nature Communications, Tim Caro and his colleagues at the University of California in Davis, didn’t perform experiments. Instead they used ecological and observational data on zebras’ geographical locations and related factors. It is the first time that a comparative approach has been applied to find the reasons for zebras’ characteristic colouration. Caro thinks his findings may have nailed the answer at last.

Caro looked at seven species of equids and scored them for number and intensity of stripes. Just to be sure, they tested all five hypotheses regarding zebra stripes’ use: camouflage, predator avoidance, heat management, social interaction, and warding off flies. The extent of overlap between the geographic distribution of striped equids with each of these five measures was calculated. 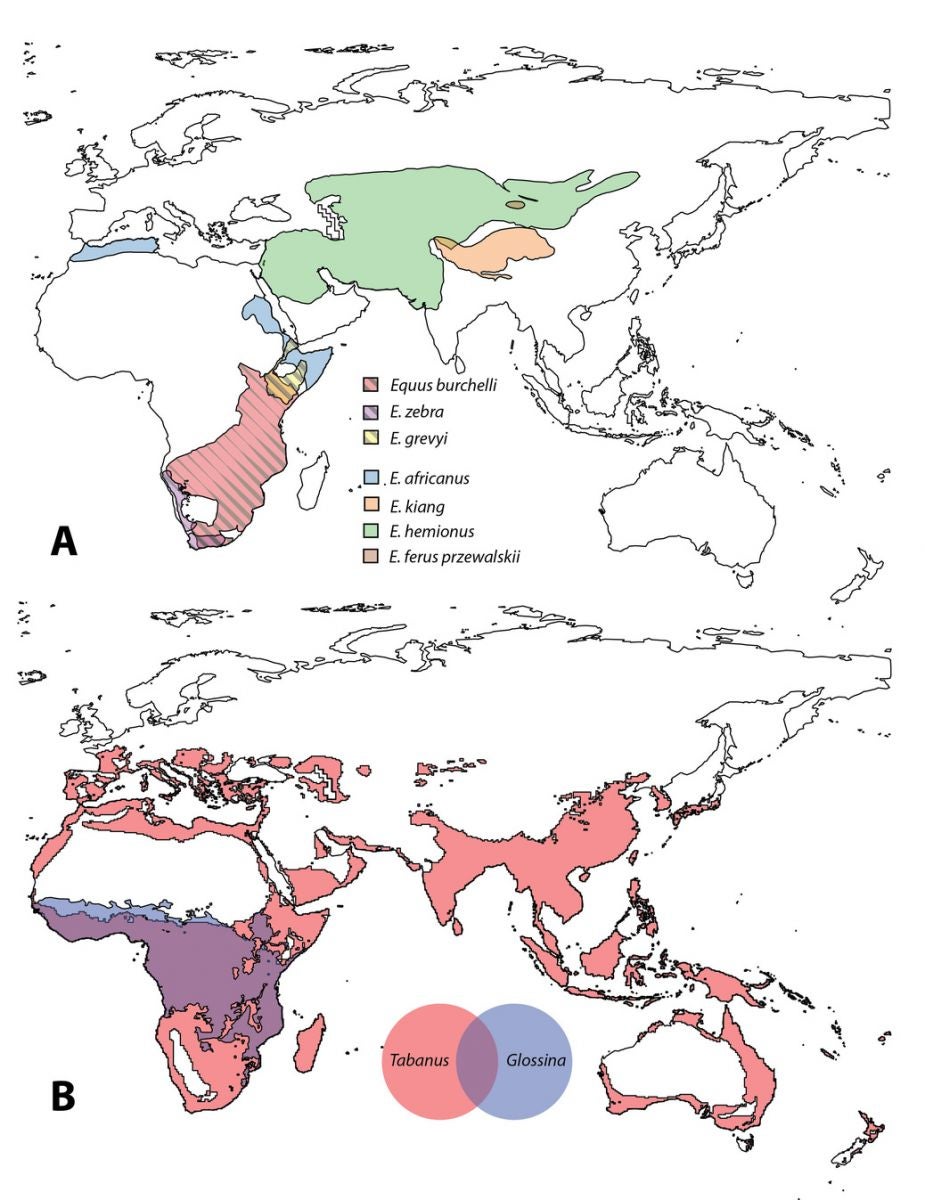 E. greyvi, E. burchelli and E. zebra have stripes on all their bodies. Other equids don’t. Caro, Izzo, Reiner, Walker and Stankowich

“The results were a shock to me,” said Caro. Of these five proposals, only warding off flies had statistical support. He had not expected such a clear-cut answer to the question. As the map shows, the only places where flies and equids live together are areas that are populated by striped equids.

The exact mechanism by which stripes deter flies remains unknown, but experimental studies performed by researchers at Lund University in 2012 have found support for this proposal. They created striped surfaces and stuck glue on them. Based on the number of flies on the surfaces with different thicknesses of stripes, they concluded that these flies stayed away from stripes as thin as those found on zebras.

“As is normal in science you get a solution that asks more questions,” Caro said. It is time to hand the problem over to vector biologists, who can understand the susceptibility of horses to biting flies.

Darwin “would be delighted” that researchers are now considering animal colouration as a functional trait, he said. We might not have all the answers regarding zebra stripes – but it seems we may be looking through the right lens.