Hypocrisy in British politics comes as no surprise to your mole, who has recently had to report on Brexiteers with second homes in Europe, the Mail discovering closed borders are bad, and liberals defending the gulag. But this latest IRONY ALERT has slapped it right in the snout.

Esther McVey, the recently resigned Secretary of State for Work & Pensions overseeing Universal Credit’s disastrous roll-out, has tweeted to the general public about her lower wages after stepping down from the government post.

“By resigning, my salary has been halved,” she tweeted, to a nation of people experiencing punitive sanctions, delayed payments, cuts to their benefits, rent arrears, loss of income, eviction, food bank use, and less money for their disabilities, illnesses and child support thanks to her former Department’s policies.

In what McVey clearly thought was a SICK BURN in response to a guy on Twitter suggesting jokingly that she should be sanctioned for leaving a job voluntarily (as is the case under the DWP’s social security system), she clarified that – actually, yes – she did suffer a loss of income when she left her job.

How the value of child benefit has plummeted

Hundreds of Ukrainian families are being left homeless in the UK 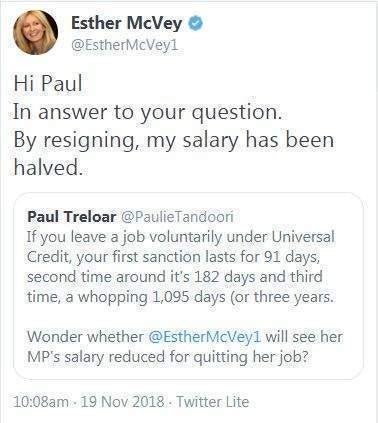 This wasn’t quite the zinger she hoped it would be, however, considering the horrifying lack of self-awareness that someone on an MP’s salary – who had presided over a government system making people worse off against their will – would think it appropriate to point out the loss of income from their own political decision.