There are two major reasons to suspect Labour is not, in fact, heading for power. The first is that Rishi Sunak and Keir Starmer are very similarly rated by the British public, and – as this graph from James Kanagasooriam shows – election results have tended to correlate very closely with the public’s preference for prime minister. 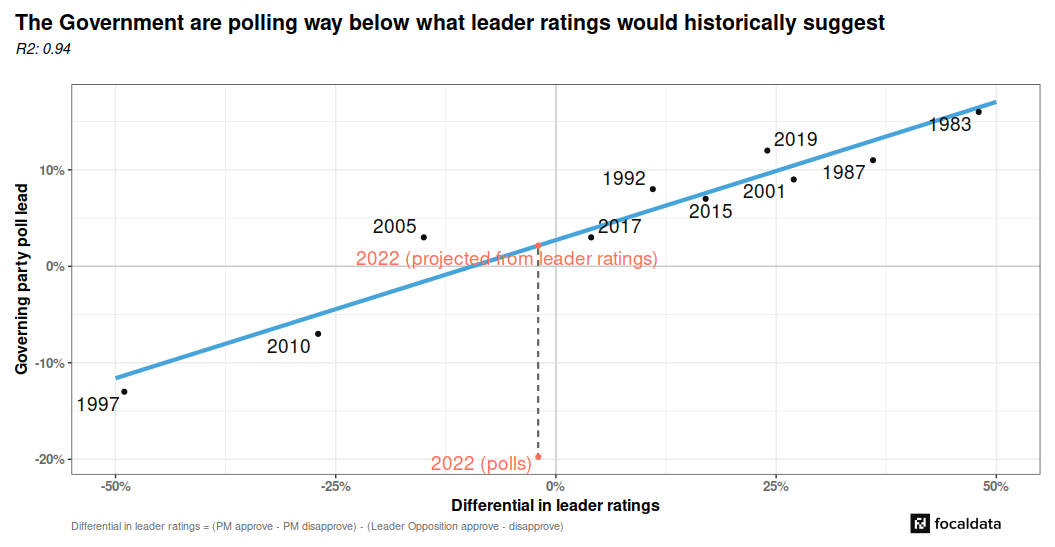 The second reason is that Labour scarcely has a lead over the Tories on the economy, which is once again considered by the public to be the number one national issue, and which has also tended to determine the result of recent general elections. The data is mixed, but Rachel Reeves, the shadow chancellor, and Starmer have no clear lead over Jeremy Hunt and Sunak.

Those two facts contrast with the 20-point lead Labour is still enjoying over the Tories in the polls, despite Sunak having replaced Liz Truss, and led me to suggest, on the end-of-year NS podcast, that Labour is in reality perhaps only five to eight points ahead. But this week has shown why Labour really may be heading for power: Starmer has a better story to tell than Sunak, whose government seems remarkably short of ideas.

Both men made keynote speeches this week – Sunak on Wednesday, Starmer on Thursday – of almost identical length (a little over 3,000 words each). They spoke at similar speeds in a similar manner – two robotic styles, both alike in dignity – and, mercifully, both speeches can be read rather than heard. When you examine the two, it is Starmer’s that stands out.

You can say a lot in 3,000 words. You can deliver Abraham Lincoln’s Gettysburg Address eleven times over. But Sunak said almost nothing. He talked of his wish, as if wishes mattered, for Britain to be a place of “optimism, hope and pride”. He broke the news that innovation drives growth. He told us that education was critical and “family matters”. He delivered one banality after another.

[See also: Can Rishi Sunak survive the wrath of the right?]

The only specifics in his speech – that his government will create 7,000 new hospital beds, put £2bn into schools, introduce 20,000 new police officers, and spend £20bn on research and development – amounted to no great series of new commitments, let alone a coherent narrative. These are all the tokens of a very familiar politics, and indistinguishable from what Labour is offering: every specific simply involved the state spending money.

Sunak spoke the language of imperatives – “We’ve got to stop violence against women and girls. We’ve got to reduce reoffending. And we’ve got to beat addiction” – without outlining any strategy for how these goals would be achieved. A great speech, like a great piece of journalism, should provide two essential ingredients: new facts, and a narrative. Sunak’s speech offered neither.

He talked about lowering taxes on working people, but how is he going to do that while meeting all the spending promises he was so keen to highlight? He can only do so by increasing taxes on British asset owners who have quietly profited from a decade of low interest rates, and need not work to earn money from their homes or stocks. But Sunak isn’t going to raise taxes on them. So how he is going to spend more, cut taxes and cut debt? You can only do two of those three – yet his speech promised all three.

Change, Sunak said, required hard work from the British people. “It’s a big risk for a politician to say that,” he claimed, before oddly going on to cite his own performance as chancellor as an example of the nation’s capacity for hard work. “Change is hard. It takes time. But it is possible. And we know that because we’ve done it before. During Covid, we protected millions of people’s jobs and businesses – a record I’m proud of.” He made an obligatory and meaningless reference to levelling up. The only Conservative achievement he highlighted since 2010 was schools reform, but he provided few details.

Starmer’s speech, in contrast, built on the themes of his Labour conference speech last year. He talked of offering a modest form of hope (“The basic, ordinary hope we used to take for granted. The sort of hope you can build your future around”), a return to targets in government (“clear, measurable objectives. National missions”), and the potential of his major policy idea in 2022: Great British Energy, a new publicly-owned energy company. He also introduced a new idea: a Take Back Control Bill, a smart move that, as Freddie Hayward says, has “taken a dry set of [Labour’s proposed] constitutional reforms and given them the legitimacy of the largest democratic vote in British history”.

There are, as I say, two big reasons to wonder whether Labour really is so far ahead of the Tories. But look deeper into the polling data and you will find a reason for Labour’s lead: they are far ahead of the Tories on an array of policy issues. This week’s speeches by Sunak and Starmer showed why. The Tories, on their fifth prime minister in 12 years, appear to have run out of ideas. And Labour, if only by default, is finally finding an audience.

[See also: Labour’s attempt to make “take back control” its own could win back Brexit voters]