The public was surprised when a new statue commemorating the life and work of the 18th-century feminist pioneer Mary Wollstonecraft was unveiled in a north London park on Tuesday morning. The statue, by the artist Maggi Hambling, is not a traditional bronze; it does not depict the women’s rights advocate dressed in a bonnet and skirts, perhaps reading or writing. Instead, it shows a small, silver, naked female figure emerging from an abstract mass.

The Telegraph called the statue “a flimsy, Barbie-like embarrassment”; on Wednesday, protestors covered the figure’s breasts and pubic area with black tape, draping face masks over its shoulders as though to give it a cape, and then covered the whole lot in a black T-shirt, emblazoned with the slogan “Woman/Noun/Adult human female”.

“On the Barbie front, can I just say: my Barbie never had a bush that big!” Bee Rowlatt said over the phone. “I’m like – are you kidding? Have you seen that pubic arrangement?” Rowlatt is the author of In Search of Mary, a biography of Wollstonecraft, and the chair of Mary on the Green, the campaign which brought the statue to fruition. After ten years of efforts, last year the initiative reached £143,300 in public donations, and with it got the green light for “the world’s first memorial sculpture to Mary Wollstonecraft”. It stands in Newington Green, close to where Wollstonecraft, best known for A Vindication of the Rights of Woman, published in 1792, lived and worked.

Mary on the Green is one of many such initiatives which aim to address the gender imbalance of historical figures remembered via public monuments: a statue of nurse Mary Seacole, the first in Britain in honour of a named black woman, was unveiled in 2016 in the gardens of St Thomas’ Hospital, London; Gillian Wearing’s bronze of Millicent Fawcett, the result of Caroline Criado Perez’s work to add a suffragette to the 11 statues of men which stand in Parliament Square, was erected in 2018; a campaign to remember the palaeontologist Mary Anning in Lyme Regis, Dorset, is ongoing.

But the Wollstonecraft statue is different. Its criticism has come, Rowlatt said, because of a fundamental misunderstanding of its purpose. The artwork is called A Sculpture for Mary Wollstonecraft: the piece is “for” not “of” her. It was never meant to be a straightforward depiction of Wollstonecraft herself; it is instead a piece of abstract art inspired by her life and work.

Much of the criticism of the statue has been concerned with the naked female figure. Many have asked why a statue of a thinker as pioneering as Wollstonecraft should draw attention to the physicality of the female body rather than to Wollstonecraft’s work and ideas; more still have pointed out that no comparative male political figure would be commemorated with a nude. 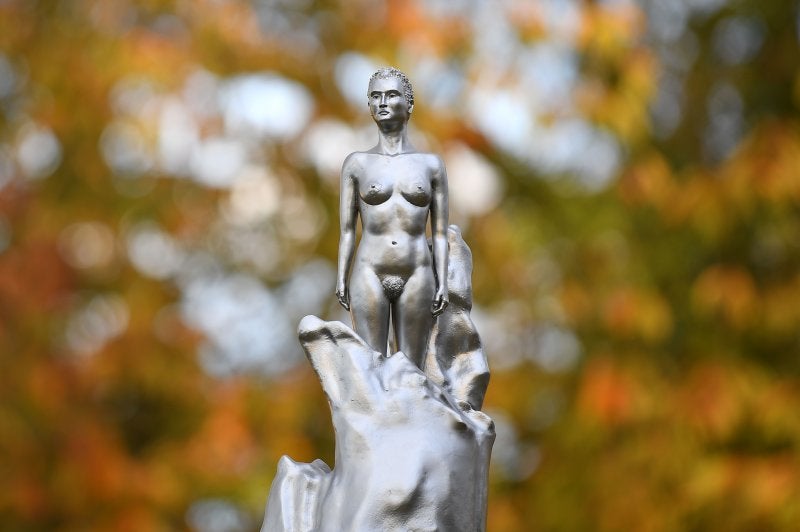 Art historian and writer Alice Procter, who has followed the Mary on the Green campaign for several years, told me she was “really disappointed” when she saw the sculpture because its aesthetic does not allow it to compete on an equal footing with other commemorative statues. “There’s no singular way to commemorate someone,” she said, “but when we talk about putting up a statue to someone who has not been previously or perhaps adequately remembered, there’s a sense that we have to work with the existing aesthetic vernacular of sculptures. These objects need to speak the same language as the monuments we already have. When we want to include Wollstonecraft among her peers, it would make sense that we mean that aesthetically as well as politically.”

“We have a monument to one individual woman and she is nowhere to be seen here,” Procter added. “To me, the biggest issue is not so much that there is a nude on the statue, it’s that this isn’t actually about Mary Wollstonecraft.”,

However that is possibly the point: Maggi Hambling has described the figure as an “everywoman”, while Rowlatt told me its nakedness is so that it can be “timeless, classless and raceless”, in order “to generate the idea of universal human rights, female solidarity”. Its nakedness, both have said, allows it to be of “now” rather than attached only to the past.

Cambridge economics professor Victoria Bateman, the author of The Sex Factor, told me she thought Hambling had done “a brilliant job of appreciating the battleground of women’s bodies and of standing up to the notion that a woman’s worth and respect hangs on her bodily modesty”. Bateman, a feminist academic who regularly protests and delivers lectures in the nude, said that the focus on the statue’s nakedness only supports the idea that women are divided up into “bodies” and “brains”, a notion from which the patriarchy benefits. “That’s something we feminists should be challenging and resisting, not going along with.”

The debate following the unveiling of A Sculpture for Mary Wollstonecraft is the latest in a series of national discussions about the ways in which we should celebrate historical figures, and why it is important to do so at all. After Black Lives Matter protestors in Bristol toppled a statue of slave trader Edward Colston, similar questions reverberated around the UK and the world.

“Black Lives Matter has blown the lid off the statues debate and quite right too,” said Rowlatt. “Artistically, there are so many ways to respond to how we want to celebrate and commemorate people. This year has been so exciting in terms of the development of those ideas, looking at street names and building names and monuments and challenging them. I think this artwork represents that debate.”

The statue also raises questions about who is involved with such commemorative endeavours, and how. Hambling was chosen via a selection process chaired by Rowlatt, but Procter wondered whether there was an issue with this initial decision, since Hambling “is known to deliberately court controversy”. Procter also posed the more general problem of how to commission public art: funding such projects via public donations can, she said, “cultivate a false sense of ownership over the end result, which is unfortunate in this case”, and likely why so many Wollstonecraft admirers have been left disappointed.

Rowlatt’s initial intention with Mary on the Green – as is the main objective of any such campaign – was to bring Mary Wollstonecraft’s story to the attention of the public, and to celebrate her work after it has for so long been neglected. Rowlatt wasn’t expecting such a backlash to the statue, and the last couple of days have exhausted her, she said. “But when people complain about the artwork today, I just think, it’s been a long time since there’s been this much awareness of Mary Wollstonecraft.”