Local authorities in the Midlands and the North of England are recording the highest rates of Covid-19 in the country, according to figures published today by Public Health England (PHE).

The new data on local authority case rates was made public by health officials this morning after pressure from the New Statesman. Previously, they were only published in a colour-coded map format – making it difficult to gauge exactly how serious the situation was in different places. The new figures are only for the latest week’s worth of data, meaning it is still hard to tell exactly where cases are rising. The news comes as the New Statesman publishes a special edition – Anatomy of a Crisis – forensically examining the British government’s response to the coronavirus pandemic.

Rishi Sunak and Keir Starmer have capitulated to the Brexit zealots

Local councils have been kept in the dark about the true level of coronavirus in their towns and cities, as the daily number of cases made public by the government at a local level only includes tests performed in hospitals that have returned positive – a fraction of the true total.

[see also Centralised government is hampering our response to Covid-19]

These tests – known as “Pillar 1”, made up the majority of cases at the start of the outbreak, but as time has gone on Pillar 1 has represented a smaller and smaller proportion of coronavirus tests in the UK. In the past week, Pillar 1 tests accounted for less than a quarter of the total number of tests in Britain.

Pillar 2 tests – which include drive-through test centres and swabs sent by post to members of the public – made up two-fifths of the total in the past week.

This means that the public figures on the government dashboard are worthless for journalists and for councils trying to see whether they need to implement a local lockdown – though that hasn’t stopped some publications from attempting to use the dashboard to predict where the next local lockdown will be.

Councils have instead had to rely on central government to let them know the number of people testing positive through “Pillar 2” – but this data hasn’t fully been made public, and has taken a while to be delivered to local authorities.

Leicester City Council was only provided with detailed testing information for the first time on 25 June, one week after the Health Secretary, Matt Hancock, announced that there was a local outbreak.

Most local directors of public health have only recently been given access to Pillar 2 data. They were given access on 11 June to an NHS Digital Dashboard which provided aggregate figures, and were only given access to PHE data at test level including postcode on 24 June.

In Greater Manchester, the new figures showed that the total number of cases was six times higher than the Pillar 1 data suggested – with Mayor Andy Burnham telling the Manchester Evening News that “It’s almost as if the light is coming on for the first time.”

However, not all councils say they have received suitably detailed postcode data yet. Some have said that the postcode-level data is only for their own area, not surrounding areas as well, and isn’t in a suitable format for local outbreaks as it is pseudonymised.

Trevor Harp, cabinet member for adult social care and health at Southend-on-Sea Borough Council, said: “Data, and the oversight of that is going to be vital as we continue to work to prevent the spread of coronavirus locally and nationally.

“We are now receiving Pillar 2 aggregated data from government, but local authorities need and have requested postcode-level data which enable us all to respond quickly and effectively as part of our local outbreak control plans.”

A Department for Health and Social Care spokesman was unable to say why the data had taken so long to be released to local authorities, or why it was not yet public.

The number of people testing positive under Pillar 1 and Pillar 2 testing is published by Public Health England at a regional level – albeit with a two-week delay.

But the total number of people tested under Pillar 2 still isn’t published. That makes it hard – or impossible – to say whether a rise in positive cases is a result of a new outbreak, or just reflects more testing.

Using this data, the most we can say is that in relatively recent weeks, the East Midlands and Yorkshire both saw a large rise in positive tests. The north-east, West Midlands, London and the south-east have seen positive tests continue to fall, but at a slow rate.

Public Health England publishes a colour-coded map, giving some data at council level, at the same time that it publishes the regional figures.

After being asked by the New Statesman, PHE published the underlying figures this morning for the latest week’s worth of data – however any changes over time are difficult to quantify.

Where are cases rising? 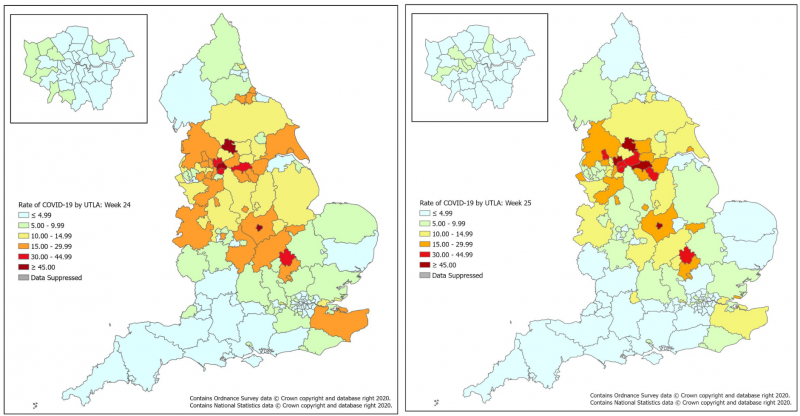 From the published maps, it is only possible to estimate where there have been significant rises in recent cases, when looking at Pillar 1 and 2 rates per population. However, without the historical raw data it is difficult to put a finger on exactly how fast cases are rising, or whether the rises are simply blips caused by increased testing.

They show that from 14-21 June, cases in Blackburn, Rotherham, and Kirklees rose from 15-30 per 100,000 people tested, to 30-35. These councils had some of the highest cases per population rates in the country.

A Department for Health and Social Care spokesperson said: “The government’s priority is to protect the public and save lives. We have been working closely with our local partners, providing them with the resources and tools they need to take swift action to deal with any new local spikes in infections.”

This week’s special edition of the New Statesman – on newsstands 2 July – compares 14 major world economies across more than 40 data points, building a picture of how well countries have dealt with Covid-19. It finds that, despite being theoretically well-prepared for a pandemic, the UK acted far too slowly – with devastating consequences. Of the countries examined, the UK has taken the longest to bring deaths down from peak levels, and has been left with the highest percentage of excess deaths. Analysing ten years of data, we find that cuts to public health, education and social care services during the period of austerity were almost perfectly tailored to weaken the state in the face of a pandemic.