One of the worst aspects of the coronavirus crisis is the need for Labour to tiptoe politely around the government’s shambolic performance. The Panorama revelations were just the latest evidence that Boris Johnson’s administration has failed on almost every front: medical equipment not stockpiled; Cobra meetings skipped by Johnson; the U-turn on herd immunity; the late lockdown; the testing fiasco; the ventilator farce… the full list.

Keir Starmer nailed the essential point at his first PMQs: the Tories were slow to everything. But he didn’t spell out why – and it’s the why that’s going to be important as we come out of the first wave, and as millions of families realise their economic prospects have permanently diminished.

The Tories were slow because they don’t believe in the state. Their principle axiom is that the market does things better than the state. They were in denial because, to recognise early that the pandemic would tank the economy and triple the budget deficit, would have meant saying frankly to the electorate: all the delusions of greatness we sold to you in December have evaporated.

But it’s also worth recognising that the Tory electoral base were, and remain, similarly in denial. In the week Johnson imposed the lockdown, YouGov reported that 93 per cent of the Conservative voters surveyed thought the government were handling the crisis well. Even 56 per cent of Labour voters said the same. And that’s what has forced the Labour frontbench, both in the last days of Jeremy Corbyn and now under Starmer, to speak in a monotone of helpful suggestions and politely critical support. Left-wing Twitter finds this, rightly, galling, with the biggest critics of Starmer coming from the pro-Brexit section of the left.

Liz Truss and the rise of the market millennials

For this group of irreconcilables, Starmer’s “capitulation to the bourgeois Remain campaign” (these were actual words thrown at myself and Clive Lewis MP at the latter’s constituency Labour Party meeting) is compounded by his failure to loudly condemn the government over Covid-19.

A glance at the latest British Election Study findings shows why they are wrong, and why Starmer’s strategy is correct. Paula Surridge, a political sociologist at Bristol University, has tracked the evolution of the British electorate along two value sets: left-wing and right-wing attitudes to the economy; and liberal versus authoritarian attitudes to society. In a research paper to be published next month, based on the BES data, Surridge shows that the liberal-vs-authoritarian debate exerted a stronger pull on voter behaviour than the traditional left-vs-right argument that has dominated party politics.

Though the liberal/authoritarian divide was energised by Brexit, Surridge’s research shows that it actually predates the referendum, and that at the last three general elections Labour’s problem has been the same: the economic left is split between strongly held liberal and authoritarian cultural values.

This graph from the unpublished study shows that even people with slightly left-of-centre views, who lean to the liberal side on cultural values (indicated by a red circle), were more likely to vote Conservative than Labour in 2019. Even those with strongly left-wing views on economic policy switch over to the Tories at the point (indicated by a red square) where cultural values are even moderately authoritarian. 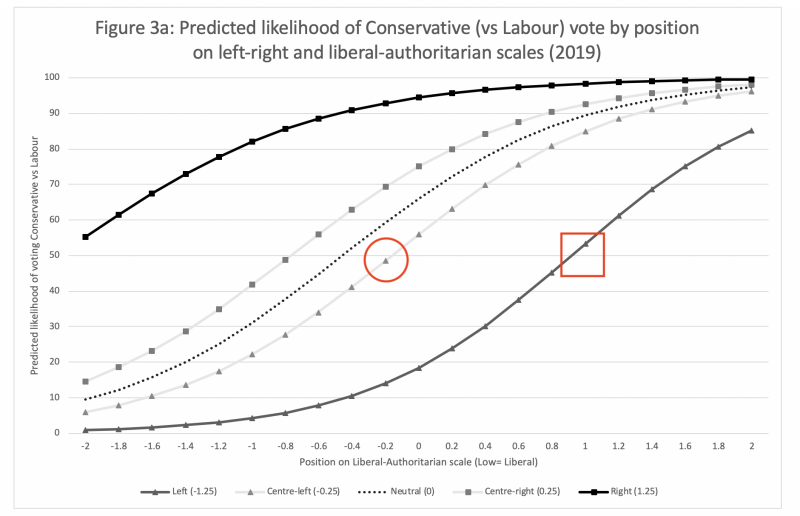 Put another way, the economic left in Britain is profoundly split over its cultural values – as will be obvious to anyone who has knocked doors for Labour at the last three general elections. People who believe strongly in wealth redistribution and state ownership can still believe that “censorship is necessary to uphold moral values” and that the death penalty should be reintroduced.

Values, Surridge says, become increasingly important as people’s party loyalties disintegrate. “These deeply held ideas of how society should shape voters’ emotional connections to politics and their evaluations of party leaders,” she tells me. “For Labour, this matters most of all because their historic coalition of voters is deeply divided on social values and this has eroded trust among those who might otherwise agree with Labour policies”.

Labour’s mistake, as I’ve argued since late 2018, was to believe that by assuaging the authoritarian group’s desire for Brexit, they could neutralise all the other cultural values that this desire embodied. Calls for Corbyn to take a tougher line on drugs, crime and antisocial behaviour were branded as “social authoritarianism” by the Lexiteers, while any acknowledgement of Britain’s defence industries and military commitment to Nato were branded “imperialism”.

The implicit assumption of the Lexiteers who steered Corbynism towards its 2019 election catastrophe was that “economics drowns out everything else”. The BES research shows the opposite. It shows in black and white that cultural values drown out left-wing economic policies for enough voters to make winning in the old way impossible.

The importance of understanding this cultural value-set as “authoritarian” – rather than simply xenophobic, nationalist or racist – is that it explains the Tories’ initially sky-high polling numbers during the first phase of the lockdown, and the response Labour politicians were reporting from the doorstep.

If you strip the word “authoritarian” of its emotional negativity, and simply use it to describe a set of voter attitudes, there is nothing more “authoritarian” than a lockdown. The police are in charge, parliamentary prattle is suspended, there’s a wartime spirit, the Queen is on the telly, and hierarchy is respected everywhere.

Anecdotally, according to MPs and former MPs, the same people who were hostile to Labour over Brexit were also initially hostile to the party over being seen to “play politics” with the coronavirus crisis. And that’s what underpins the measured response of the Shadow Cabinet so far. While there’s outrage in the medical professions over the lack of personal protective equipment, and frustration among scientists at the failure to listen to World Health Organisation advice, in the former “Red Wall” there’s still plenty of support for Johnson. The litany of Tory failings will, once the public inquiry begins, be easy to pin on incompetent underlings or even “bad science”.

But Labour is treading a fine line. The 2.6 million health and social care workers are a core part of the 10 million-strong electoral base it has to protect and represent. So are young people and black, Asian and minority ethic people (BAME), both of whom a BMG poll found were significantly more likely to have lost their jobs and be thrown into financial insecurity during the crisis. They are increasingly outraged both at the government’s handling of the situation and at the hardship they are having to bear.

The same “two nations” that contested Brexit are having significantly different experiences during the crisis. Older people with secure, though inadequate, incomes are not reeling from the kind of shock that’s affected the precarious workforce, who have been dumped onto Universal Credit.

For those impatient with Labour, who want Starmer to politicise every government failing, there is a legitimate fear that (to summarise): “Unless we are tough now in our criticism, once the crisis has passed we’ll be urged to move on and forget what happened.” That is certainly a risk.

But there is a longer game. Its single objective has to be to create a narrative, a policy offering and a vision that can win back seats such as Leigh and Bassetlaw – and then take those such as Plymouth Moor View, Norwich North, and Swindon South, which Labour needs to form a government.

The first objective is to look competent: to actually look like you might be able to take control of a department of the British state and not screw up the way Matt Hancock has done. You do this by listening to evidence and understanding the “known unknowns”. Starmer and shadow health secretary Jon Ashworth have done this assiduously from day one – seeking and studying briefings from the public health professionals and scientists whose work is, or should be, influencing the government. Their call for a public discussion on an exit strategy was premised on the well-sourced understanding that the Tories don’t have one.

But in the longer term there are only three choices for Labour – and they were presented clearly in the leadership election: stick with the same mixture of left economics and socially-liberal values and hope the electorate changes; ditch the social liberalism for the Blue Labour communitarian agenda and hope the socially liberal mass base of Labour doesn’t notice; or reconstruct the party as an alliance which respects and contains the cultural differences while preserving the essence of its left-wing programme.

The last one won. What it means in practice is that Starmer has to convince people who think Johnson has done a good job in 2020, and who still might consider voting Labour in 2024, while avoiding losing the socially liberal, young and BAME core vote.

And while some of that will be achieved by showing forensically that the Tories screwed up the initial response, leading to tens of thousands of needless deaths, the heavy lifting will be done over the vision of the kind of society we want to emerge from this.

The crisis has opened a major breach in the thinking of the establishment about the state. The opportunity for the left – just as it was from 1929-31 – is to reshape public thinking about the state’s role in the economy. Because, in case it isn’t obvious, the “socially authoritarian” voters Labour has lost actually like the state. A strong welfare state that looks after its citizens, nurtures strong communities and supports the incomes of the poorest is what they grew up with, and what many want to return to.

So, yes, the Labour frontbench has to be critical and forensic over Covid-19. But its strategic job is to reunite left voters across the cultural divide. It is the coming economic slump, and the geopolitical chaos it will trigger, that will provide the real test of whether Starmer can achieve that.