Left-wing campaign group Momentum attracted a mixture of anger and ridicule when it announced that it would not ballot its membership on which candidate it should endorse in the Labour leadership contest. Instead, the group simply asked members to vote on whether to accept or reject an official resolution to support Rebecca Long-Bailey.

Our survey of Labour Party members – commissioned from YouGov by the Party Members Project run out of Queen Mary University of London and Sussex University – suggests critics of the decision may have a point.

By no means all those Labour members who told us they also belonged to Momentum are fans of the woman who some have labelled the “continuity Corbyn” candidate. Indeed, only the barest majority of them named her as their first choice when we presented them with a list of possible runners and riders.

Raise a spliff to Sadiq Khan, a politician brave enough to get real on drug reform

True, Long-Bailey looks to be the overall winner among Momentum members, three and a half times as much support as Keir Starmer, with the other candidates even further behind. But the fact that, in our survey, Long-Bailey was the first choice of only just over half of Momentum members suggests that those members deserved to be asked a genuine question, not just to confirm (or otherwise) the choice made by the organisation’s National Coordinating Group.

But that’s not all our survey reveals when it comes to how Labour members feel about the leadership contest. We also wanted to know which qualities in a leader party members valued most highly.

The results we publish here refer only to what proportion of members ranked that particular quality as number one on the list. But they do suggest that while voter appeal is seen by many Labour members as important (more so, maybe, than they are often given credit for), being seen to have strong political convictions also matters. 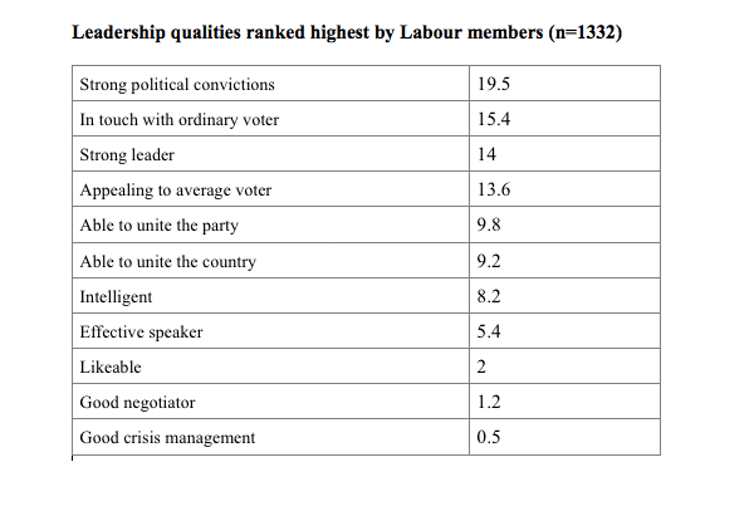 Perhaps that’s not surprising since, almost by definition and as our recently published book shows, most party members are pretty ideological creatures. Labour’s rank-and-file are, by and large, very left wing and very socially liberal. But this also means that there is relatively little room for variation between the supporters of the various candidates. Yes, Long-Bailey’s backers are a little more left-wing and socially liberal than her opponents’ supporters, but the differences are tiny.

What’s more interesting, therefore, are the differences in the leadership qualities that are most highly valued by the supporters of each candidate and then which candidate is favoured according to which quality members thought most important.

For Starmer’s supporters, his biggest draw would seem to be his ability to appeal to and to be in touch with voters; being seen as a strong leader and being able to unite both party and country also count. For Long-Bailey’s supporters, however, her appeal would seem to be overwhelmingly down to the perceived strength of her political convictions.

If, however, we break things down the other way around and look instead at which candidate comes first among those members who rank a particular leadership quality highest, we see a clearer picture emerge.

Starmer comes first in all categories except likeability, being in touch and strength of convictions, where Long-Bailey wins. Once again, her key asset would seem to be the fact that she is seen to believe in something. 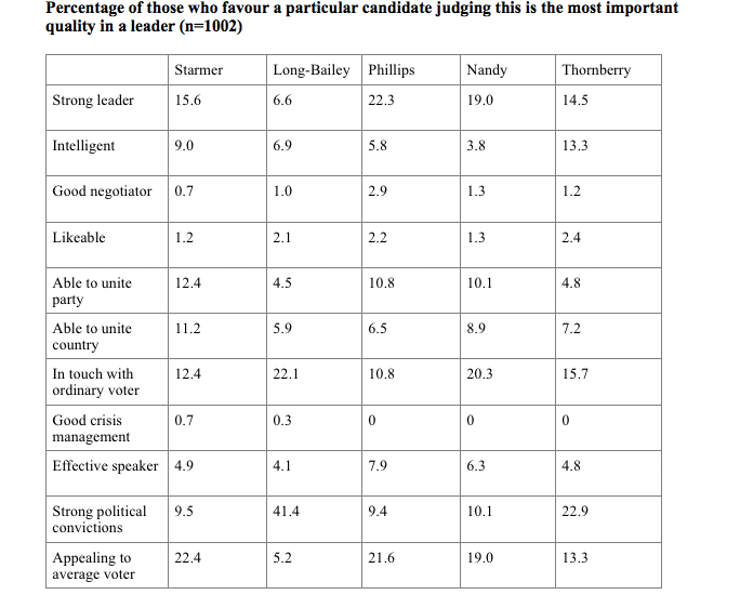 Judging by the campaign so far, Starmer’s team is doing its very best to stress to Labour members that he also believes in something. This is a wise move. Historically, when picking leaders, parties have taken candidates’ convictions into account but have tended to put more of premium on their perceived ability to unite the party and then on their supposed appeal to voters. Nowadays, when members rather than MPs matter most to the decision a party makes, convictions can really count.

This article has been updated after an earlier version incorrectly reported Rebecca Long-Bailey’s support among Momentum members as 26.6 per cent rather than 51.7 per cent

This piece is cross-posted from The Conversation