The chaplain to the Speaker of the House of Commons, Rose Hudson-Wilkin, complained to parliamentary authorities about the “ongoing stench” and “unsanitary state” created by rough sleepers in the underground entrance used by MPs, Peers and staff to access parliament from Westminster Tube station.

Hudson-Wilkin, who was appointed to her Commons post in 2010 and has also been chaplain to the Queen since 2007, expressed her concern about the “ongoing stench, due to it being used as a urinal and the fact that it is absolutely filthy” in a February email to parliament’s director of security, Eric Hepburn and the then House of Commons clerk, Sir David Natzler (who retired in March).

The email, released to the New Statesman via a Freedom of Information request, was dated 4 February – just two months after a 43-year-old man named Gyula Remes became the second homeless person to die in the station, collapsing by the parliament entrance and dying later that night.

“I physically feel as though I am going to be sick each time I go by,” Hudson-Wilkin wrote in the email. “I have been tempted to take a bucket and mop to it myself.”

She urged the authorities to “address the unsanitary conditions that we face daily arriving and leaving the parliamentary estate,” and said she felt “saddened for the security staff based there, who has [sic] to inhale the stench. I think it is unacceptable that they should have to work in that environment or that it should be used as an entrance / exit in such unsanitary state.”

The chaplain expressed sympathy for the rough sleepers, calling it “heart breaking to realise that we have people sleeping by the underground entrance”, and “devastating to learn that at least 2 people have died there too”.

She wrote that she had repeatedly approached Transport for London, and of her “sense of hopelessness as I personally cannot solve this problem” – urging it to be treated with “urgency”.

Hudson-Wilkin, who will become the next Bishop of Dover in November, also suggested that the presence of rough sleepers could be a security concern.

“More recently I notice that the homeless sleepers are leaving bedding stacked up there. Surely this cannot be safe. This could be used by some unscrupulous person as a cover up for an explosive device – after all the clientele using that entrance and exit are the kind of people who are likely to be targeted…

“Now that bundles of stuff is [sic] being left there, I really am beginning to feel unsafe personally and equally for everyone else who uses that exit / entrance.” 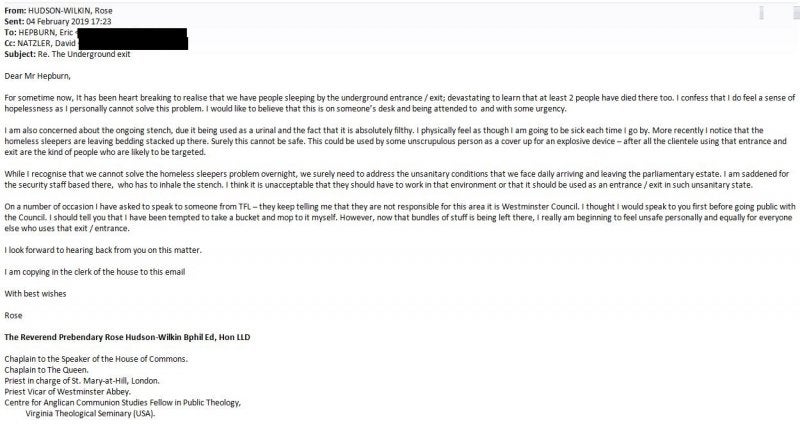 The New Statesman asked Hudson-Wilkin to comment on her email, but has not received a response. In a reply to the February email, Natzler – who retired in March – said her concerns “reflect a very widespread view among the Westminster community that something should be done, without it being quite clear what!”

He welcomed her offer to get “involved and call it out”, but added: “We have to be careful to avoid giving the impression that we do not want rough sleepers there – a warm and safe place compared to some others – simply because they are offensive, as indeed the stench is for the police on the door.”

The same day of this email exchange, a question was raised in a Lords Members’ security briefing about safety in the Underground station, regarding rough sleepers: “Tube exit is the perfect place to do an attack so it is a security concern now, need to do something immediately but working with charities to look after the homeless”. There is no record of the direct response, nor the name of the questioner.

The House of Commons maintenance team has also received clean-up requests from people in the building related to rough sleeping in the station, the New Statesman has learned. These include one request by an unnamed individual to remove a rough sleeper’s “newspaper bed” from outside the exterior of the ticket office on 12 October last year – two months before Remes died in the same station.

Remes’ death last December followed that of a 35-year-old man in February of the same year, also in Westminster Tube station, in the underpass of exit three. MPs left flowers and cards, and Remes’ death was called a “wake-up call” for Westminster.

Since then, however, rough sleepers in Westminster Tube station have been told to move on. Homeless people were cleared out of the underpass in March, and then again in August, when rolldown shutters were installed, in effect evicting the rough sleepers. Parliament had to apologise for a cleaning contractor photographing individuals bedding down close to the Palace of Westminster last month.

At least one MP has complained to the Metropolitan Police about homeless people in Westminster Underground station, though they haven’t yet been named.

“It is very disappointing to learn of complaints about rough sleepers at Westminster,” says Neil Coyle, the Labour MP for Bermondsey and Old Southwark who chairs the All-Party Parliamentary Group for Ending Homelessness. “The people most let down by our society deserve a little more empathy and support than seems apparent here.

“I hope there is correspondence with relevant ministers and government departments expressing the need to help provide better shelters and accommodation rather than just complaints to the police about the smell of homeless people and the security risk their blankets pose MPs and peers.”

A spokesperson for the Labour Homelessness Campaign, which has been helping people sheltering in Westminster Tube station, says:

“We’ve seen again and again how rough sleepers in Westminster are subject to dehumanising remarks like this, to stigmatisation, and to denial of their basic rights.

“These words have an impact… Human beings living on the doorstep to parliament have had all their belongings destroyed without warning, faced continual harassment under the 1824 Vagrancy Act, and finally were evicted without warning into the cold with no support given. We’ve got a homelessness crisis, and public spaces should be for people not just for privilege – open the tunnels up to the rough sleepers who need shelter, not just to those who walk past them in suits into parliament each day.”

A record number of homeless people are dying in England and Wales. Last year, the ONS recorded 726 homeless deaths – a rise of 22 per cent in one year, according to figures released last week.

Of the areas with the highest number of homeless deaths, Westminster is fourth – preceded only by Birmingham, Newcastle upon Tyne and Manchester, in that order.

According to the latest government rough sleeping figures in England, Westminster also has the largest number of rough sleepers in the UK. In autumn 2018, 306 people spent the night on the streets of the borough that is home to the Houses of Parliament and Whitehall government departments, up by 41 per cent on the previous year, and more than double the next-highest borough on the list, which is Camden in north London.

Figures from a more recent London-wide survey by the Combined Homelessness and Information Network also found the majority of rough sleepers in the borough of Westminster, which had 2,512 between April 2018 and March 2019: more than a quarter of the total for the capital.