Clean-shaven walrus and Attorney General Geoffrey Cox has responded to a report from Channel 4’s Jon Snow that he said “NO” to the extra assurances added to Theresa May’s withdrawal agreement.

“Bollocks” was his response on Twitter to Snow’s titbit:

“A Lawyer contact tells me that the legal world is aware that the Attorney General said NO last night to the validity of Mrs May’s ‘new EU deal’…he been told to go away and find a way to say YES: A cohort of lawyers has been summoned.” 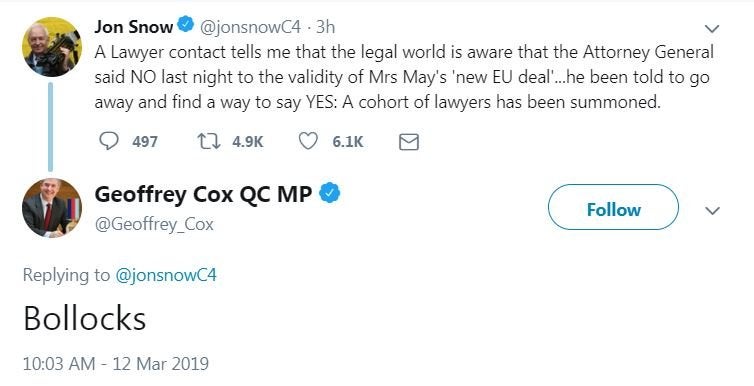 But Cox’s legal advice on the new mechanism has since been published – and indeed appears to be a big “NO” to the idea that it’s legally binding, concluding:

“The legal risk remains unchanged that if through no such demonstrable failure of either party, but simply because of intractable differences, that situation does arise, the United Kingdom would have, at least while the fundamental circumstances remained the same, no internationally lawful means of exiting the Protocol’s arrangements, save by agreement.”