“I don’t want to talk about it,” barks a taxi driver outside Milton Keynes station, climbing into his cab and shutting the door. “That’s it,” he yells from the window. “It’s decided. We’re out. Accept it.”

“But don’t you think people have changed their minds…?” an activist for the anti-Brexit party, Renew, entreats, bending down by the window to get a view of the driver’s seat.

The cab zooms away to the front of the rank.

Unperturbed, the campaigner – who I can’t identify because he works for an apolitical organisation – moves on to the next group of taxi drivers to ask them about Brexit.

He’s a “Bregretter”, and feels he was “lied to” by politicians about the positive consequences of leaving the European Union. He had been attracted by the prospect of more money for the NHS.

“All the things we were told about are actually not true,” he tells another group of cabbies, sitting on a bench in the sun while they wait for passengers. They squint up at him as he makes his pitch: “What does Brexit actually mean? No one has defined what it is! I voted to Leave and I’ve changed my mind.”

We’re on the southeastern leg of Renew’s tour of the country, “Listen to Britain”, which has seen the brand new political party travel from the northwest, through Scotland, back round through the northeast and down to the Midlands and the southwest. 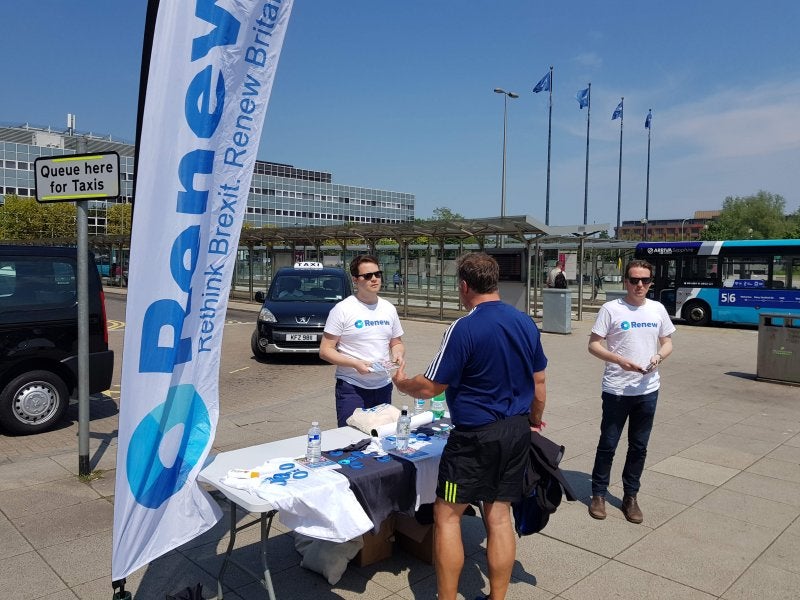 According to co-founder, James Clarke, who’s wearing a t-shirt with “Renew” on the front and “Rethink Brexit Renew Britain” on the back, this Buckinghamshire new town born of Sixties utopianism and small-c conservatism is “fertile Renew territory”.

It voted Leave by a small margin (51.4 per cent to 48.6 per cent), but Clarke – who used to work in tech start-ups and the travel industry, and co-founded Renew after running as an independent last year in south London’s Bermondsey  – says this area is a “good hub for us”.

There are 100 Renew supporters within 30 miles, and the area has a young, relatively cosmopolitan and affluent demographic it can tap into. Santander HQ and the glistening glass 401 Grafton Gate building, home to tech companies, loom opposite the station carpark where Clarke mans a stall with leaflets, wristbands, badges and a big blue Renew flag.

Why is the logo blue? “It’s very hard to find a colour in politics, because everything’s taken,” laments press officer Dan Morris, who joined Renew after he finished studying last year. “But it doesn’t matter what the colour is! Blue doesn’t mean Tory. That’s the kind of thing we’re trying to stop. It’s not about the colour, it’s what we stand for.” 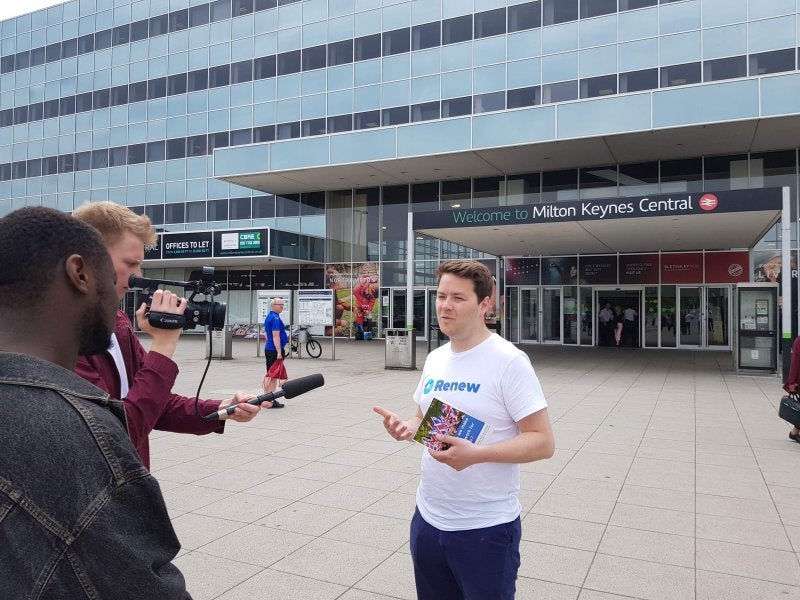 Renew has ten paid full-time staff and a committed base of 100 volunteers it can rely on to turn up. The average age of its office, based in south London’s Clapham South, is 30. It is unashamedly an anti-Brexit party, which, according to Clarke, is “more centre-right on the economy and centre-left socially”.

Why not join the Lib Dems then, I ask one of their new volunteers, Alan Victor, who is doing his first day of campaigning – with his two-year-old son (and his beloved tiger teddy) for support.

“The Lib Dems are part of the same establishment,” says Victor, who voted Remain in the referendum and is disappointed in our politicians “failing to tackle the underlying questions” of Brexit.

“The Lib Dems have got their own baggage which limits the way they can make an impact,” he says. “If you’re new and fresh, you can start again from first principles.”

Renew’s leaders and activists are touring the country trying to recruit supporters, candidates and donors.

The message confuses some, and entices others. “You’re not the new face of Ukip, are you?” one man asks suspiciously. Another, younger passerby hovers excitedly. “Is this against Brexit?” he asks, grabbing a rubber wristband and nodding as Clarke explains what Renew’s about.

One taxi driver fills his taxi with Renew leaflets, so keen is he on keeping migrants in the UK. “The people from Europe, they’re doing double shifts, they’re the people driving this country,” he says, accepting a bunch of flyers. “We’ve got to work as a team – if you don’t work together, you don’t get anywhere. I’ll look into it.”

Another tells me he would be open to voting for a new party, but needs to see some policies first. “I think it makes sense, but I have to read a manifesto,” he tells me. “To see their policy on migrants, the economy. What’s their plan?”

Renew was created last autumn, when a handful of candidates running as pro-EU independents in different seats joined up with one another after the general election.

Since its launch, it has received over 1,000 applications from people who wish to run as parliamentary candidates (220 have been selected so far), and has 6,000 registered supporters.

It plans to contest every seat at the next general election. 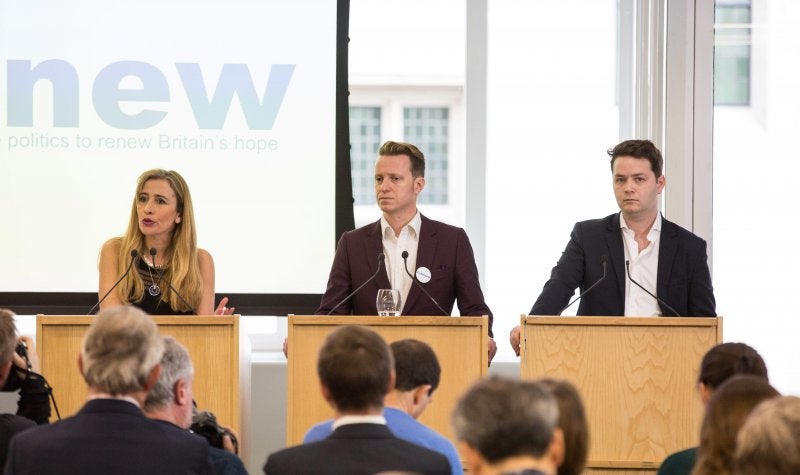 During the local elections in May, Renew had 16 candidates campaigning to become councillors in London and North Tyneside, three of them defectors (one was the Labour group leader of Portsmouth City Council, and the other two long-serving Labour and Conservative councillors from Durham and London respectively).

They all lost, though the party pointed out in a cheery press release the next day that it beat the Lib Dems, Greens and Ukip in certain target wards.

Renew started with £200,000 worth of seed money, which its founders say was amassed over the past year or so from private donors and business owners – and £20,000 was raised through crowdfunding. There is no charge for membership.

“We are not funded by Tony Blair, George Soros, Israel, the EU or George Osborne,” sighs one of the party’s three leaders, James Torrance, when I ask about money during a chat over iced coffees in a London café a few days after the local elections.

Torrance worked as an accountant and consultant, and used to be a member of the Conservative party. Theresa May’s leadership prompted him to leave and run as an anti-Brexit independent candidate in Kensington last year.

“George Soros can fund us if he wants!” quips one of his co-leaders, Sandra Khadhouri, who is also the party’s head of communications and has joined us for a coffee. “Do we have to talk about money, anyway?” 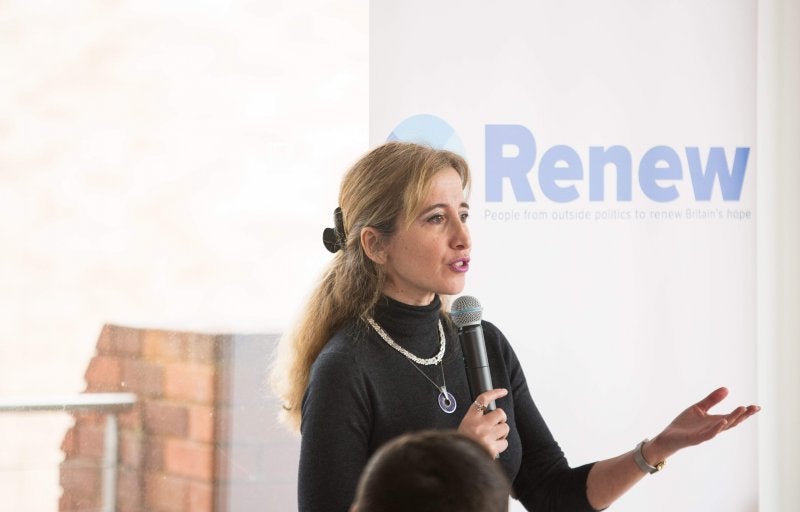 Khadhouri, who worked overseas as a conflict adviser, was attracted to a party that would represent the “politically homeless” following Brexit. She wants people from “outside politics” join up, but also says “we’ve tried to talk to Tory and Labour MPs who are discontent” to tempt defectors.

“We don’t want to leave the EU; we want to reform it,” she adds. “We are about tolerance, while accepting the grievances behind the vote; the anti-immigration feeling is real. We’re having an honest discussion.”

The three leaders, who call themselves “principals”, admit they need to work on policies.

“We are going to focus on things other than Brexit,” says Torrance. “If we do leave the EU, the same problems will still exist. We have policy directions; fundamentally, our philosophy is that we believe in the welfare state, an NHS free at the point of delivery, but can’t have these things without a functioning economy.”

But centrism has gone out of fashion. We’re in an era where “centrist dads” are dismissed online as backward bores, and radical politicians attract supporters sick of the polite consensus.

“There’s a sense if you say you’re centrist that it’s dry and technocratic, nihilist even,” admits Torrance. “Is Tony Blair a lodestar for us?  No. He came to centrism to win elections; I’d much rather have the ideas – that’s a different approach. [But] it is a challenge for us to say centrism’s something worth fighting for.”

People accuse them of not believing in anything, Torrance says. He warns against the idea that their values are simply: “Nice things are nice, nasty things are nasty, I believe in fairies and rainbows falling from the skies.” 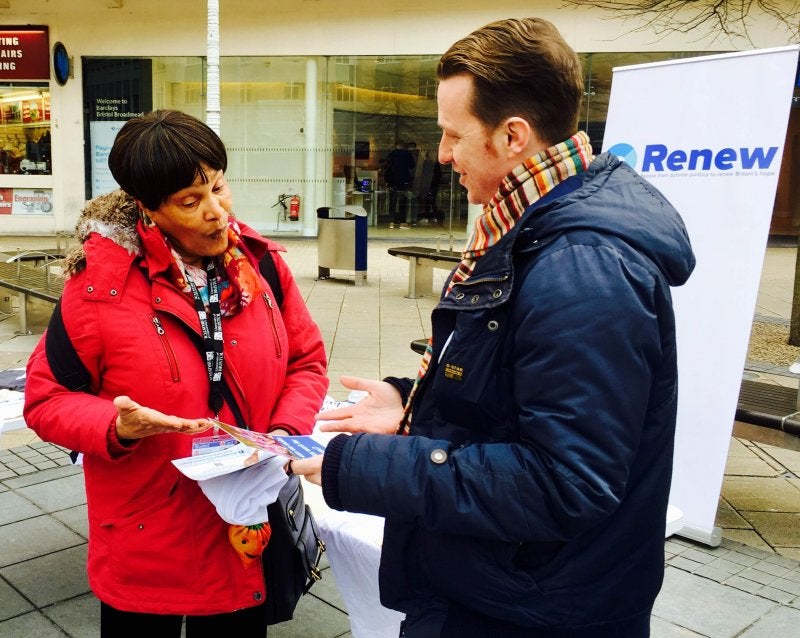 Cynicism from the press has also been a challenge. The constant churn of new, centrist parties ever since the EU referendum divided the Conservatives and Labour – and kept the Lib Dems in obscurity – has become something of a joke among the political commentariat.

“There is animosity towards us from journalists,” sighs the pleasingly frank press officer Morris. “On election night – ‘you haven’t got any seats, we’re not going to talk to you’. They don’t want centrist, reasonable – they want Nigel Farage on Question Time.”

Westminster wisdom, and electoral evidence, says First Past the Post is an almost unsurpassable barrier to breaking the two-party mould.

But Renew’s founders are upbeat about how unpredictable today’s elections can be.

“We are feisty, we want to shake things up!” laughs Khadhouri. “Is there a way of changing the political scene, the establishment? People might [hesitate to give us support] at the ballot box. We need to convince them it’s not a wasted vote.”

Nodding along, Torrance has a more drastic way of describing their task, put to him by a friend.

“If the Nazis had won the Second World War and we were all living in a Nazi-run UK, think of the scale of the resistance you’d need, but you’d set up that resistance” he says. “That is the level of insanity – but the only way someone is going to make it work is to give it a go. So we’re giving it a go.”