The Virgin of the Rocks is one of the jewels of the National Gallery’s collection, a Leonardo masterpiece that is worth millions.

It is also, I found out this week, surrounded by toilet paper.

Why? For years, the painting sat in an ornate gilt frame with marble inserts, the gaudiness of which fought with the painting and overpowered it. Then Peter Schade, the gallery’s director of frames, stumbled across a 16th-century altarpiece in a huge auction of antiques in Italy. “It was lot 700, or something,” he tells me. “These things almost never survive. We have a dozen paintings it could have been used for.”

There was only one problem: being an altarpiece, it had only a top and two sides. So Schade had to make the bottom of the frame himself. That’s where the loo roll came in. “The original frame was made from poplar and the column tops would have been carved. But it’s made from a pliable material that dries and hardens – not pressed into a mould like a 19th-century frame. This is basically toilet paper, linseed oil and rabbit-skin glue.” He catches my look of surprise. “Paper pulp helps to make it set without cracking. Toilet paper by law has to dissolve into pulp. I’m sure you can buy paper pulp more expensively but toilet paper does the job.”

Despite its humble origins, the finished product is beautiful: still grand and dramatic but in a way that complements rather than detracts from Leonardo’s work. It’s so good, in fact, I doubt anyone will notice it. 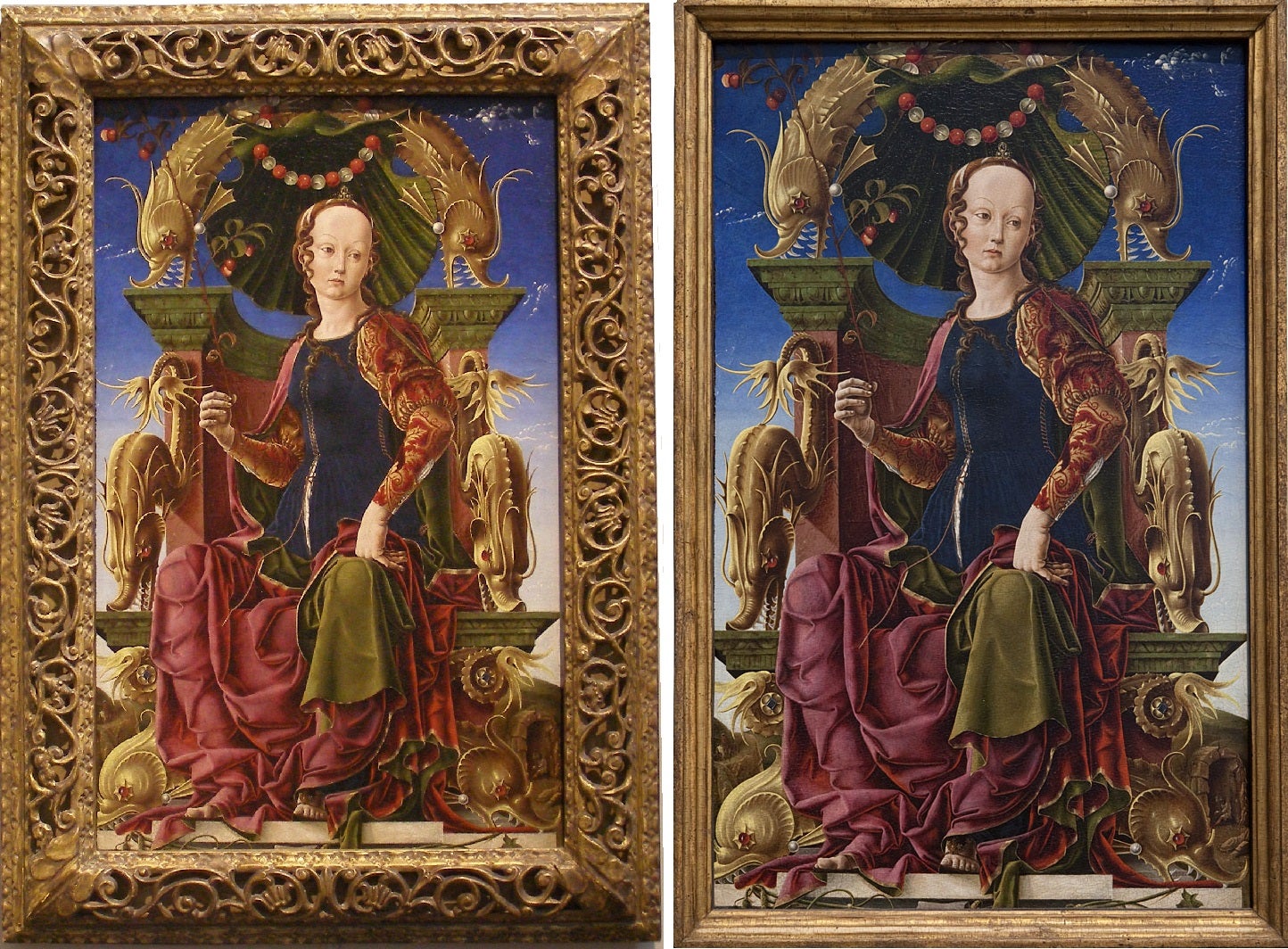 And that is what brought me to Schade’s workshop: to understand how frames invisibly change our perception of the pictures inside them. Take the National Gallery’s successful fundraising drive for a new frame for Titian’s Allegory of Prudence. The painting is not to my taste – three heads, two in profile and one face-on, with animals underneath. But there is no doubt it looks better in its new, flatter frame than the old, highly raised one. “The old frame is the wrong century and the wrong style for it. It crowds the picture,” says Schade. “The intended illusion of the painting is of a three-dimensional image, and that sculptural quality is much more revealed.”

The new frame is a 16th-century Venetian original, one that Titian might have recognised. A replica could have been commissioned, Schade admits, but he always prefers to use a contemporary frame. The gallery aims to balance historical authenticity with aesthetic demands and in the nine years he has been at the gallery, that has involved replacing nearly 200 frames.

Framing goes through fashions, just like everything else. For instance, Schade shows me examples of the frames in which medieval religious art originally would have been placed: these are slim, rectangular moulds, barely an inch wide. “In the 19th century, when these 15th-century, early-Renaissance
paintings became fashionable, they were reframed to make them look like Old Masters, because they had these thin mouldings that no one took seriously,” he says. “Big frames made them proper commodities.” He shows me an allegorical figure by Tura restored to its original mount: suddenly, it seems more like a devotional relic and less like posh interior decoration.

Colour matters, too. Take a self-portrait of Rembrandt, in characteristically dark browns and blacks, and put it in an ebony rather than a gilt frame. “In the light frame, all you see is the face and hands. A suitable frame will make the painting legible.”

The one thing that draws most attention to the importance of frames is removing them altogether. It has rarely been tried with historical canvases and Schade dislikes the style, adopted by the Italian architect Carlo Scarpa, in which they are placed, naked, in Perspex stands. “That looks really odd, especially in Italian palaces, where the rooms are really historical,” he says. “It robs them of a certain dignity.”

Schade concedes that very few people notice his work. Framing has long been on the margins of art history and sometimes even the museum staff ask him if a painting has been cleaned or restored, when what has happened is that he has replaced the frame. This, for me, is everyday magic, sleight of hand. As Schade says, “Frames are used as a metaphor in normal life. But it does make a huge difference to how a work of art is perceived.”

In politics, “framing” as a metaphor crops up again and again. Politicians frame themselves – there is a reason a US president has his own plane and helicopter and phalanxes of secret service agents. It’s about the projection of power as much as security. And there is a reason the business suit is so enduringly popular; its wearer benefits from our subconscious expectations about his status and importance.

Ideas get framed, too. The present tussle in the general election campaign is over the attitude of Labour and the Tories to business. But what does “business” mean – the guy who runs the corner shop, or the plutocrat withdrawing millions in cash from HSBC Suisse? As much as over individual facts, political parties fight over how issues are framed. Does the economy mean the deficit (great for the Tories) or the cost of a loaf at Tesco (better for Labour)?

Then there’s the biggest frame of all, which is perhaps the most invisible: the Overton window. That is the range of policies a politician can espouse without seeming too extreme or unsettlingly radical. After the grand ideological battles of the 20th century, the Overton window now feels smaller than ever, with even previously unremarkable policies such as nationalising the utility companies (backed by a majority of the public) stranded outside it.

That is the mark of a good frame: it affects the way you see, without you seeing it. We should all pay closer attention.