David Cameron’s reticence over condemning Israel’s actions in Gaza has been brought into sharp focus this morning as Sayeeda Warsi, Foreign Office and Faith and Communities Minister and former chairman of the Conservative party, has announced her resignation from the government in light of its policy on Gaza.

With deep regret I have this morning written to the Prime Minister & tendered my resignation. I can no longer support Govt policy on #Gaza

­­A Tory life peer and lawyer, Warsi was Britain’s first female Muslim cabinet minister, joining the cabinet in 2010 as minister without portfolio.

When the Conservative party was in opposition, she held the positions of shadow community cohesion minister and shadow social action minister – both roles that hinted at the party’s recognition of how useful it is both for the look and culture of a party trying to modernise of having someone focused on faith, and a high-profile Muslim women’s rights champion, from an ethnic minority group herself, on the frontbenches. A daughter of Pakistani immigrants, who was brought up in Yorkshire, she has described herself as a “Northern, working-class roots, urban, working mum”. In 2009, the Mail described her as “the multicultural face of the new Tory Party”.

It has often seemed to Westminster onlookers and insiders that Warsi has been promoted and retained a place in government so steadfastly partially due to the fact that it would look bad for Cameron to demote such a figure, because of what she symbolised and her unique position in the Tory upper echelons.

As commentators are currently pointing out, Cameron’s relationship with Warsi was often fraught and he may have been tempted to oust her from his frontbench due to her less-than-subtle opposition of the PM on a number of issues, and her propensity to go off-message. She has made forthright comments about immigration and religion, a memorable remark being her comparison of banning the burka to outlawing the miniskirt. She also riled the leadership recently by advocating clearing the “Eton mess” out of No 10.

Warsi was mired in an expenses row in 2012, which was said to make the PM “uncomfortable”, but was eventually cleared of the charges. It was argued at the time by some that the row was not just about expenses, but also down to her perceived unsuitability to the role of party chairman. From sources in Westminster, I have heard a few of her Tory colleagues sometimes don’t take her entirely seriously. One source recalls fooling Warsi in a Foreign Office meeting prior to the German Chancellor Angela Merkel’s visit early this year that they were obliged to welcome their foreign guest with a rendition of the German national anthem.

But regardless of individuals’ opinions of Warsi’s position in the party, they will have to take this situation seriously today. No longer can Cameron accuse Ed Miliband and the Labour party’s criticism of his silence over Gaza as playing politics; someone on his own side has now done far more than that.

Sayeeda Warsi has tweeted a picture of her resignation letter (click to zoom in): 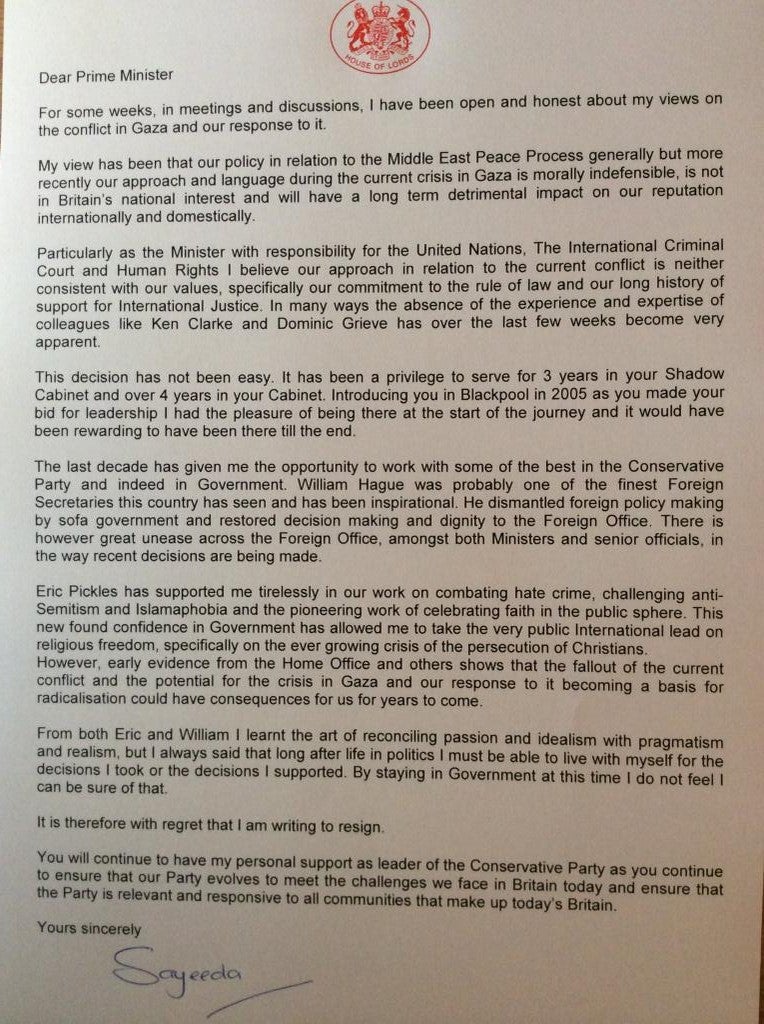 listen to ‘The New Statesman Podcast: Episode Fifty-Six’ on Audioboo