Thursday’s interest rate announcement from the Monetary Policy Committee is unlikely to generate many headlines. “Bank does nothing for 65th month straight” is hardly a circulation-booster, even during silly season. But we can expect plenty of speculation alongside the announcement that the consensus among MPC members on holding rates will have been broken for the first time since the summer of 2011.

We won’t know for certain until the minutes are published in a couple of weeks, but it is surely only a matter of time before such divisions become apparent. At some point rates must rise, but getting the timing and pace of change right will be an extremely difficult task. Differences of opinion are natural. After all, on the one hand the UK economy is expected to be the pace-setter among advanced economies over the course of 2014; yet on the other, average wages continue to fall in real terms.

Making the right call is made both more difficult and more important by the continued presence of a debt overhang built up during the pre-crisis years. This legacy means that, even with rates at an all-time low, almost one-in-five mortgagors say they’re struggling to meet their repayments. Small initial movements in the base rate might not have a material effect on these households, but if the trajectory is such that borrowing costs normalise before incomes do, then the potential for repayment difficulties is significant.

The MPC is of course alive to this danger: Mark Carney has stated that rates won’t rise until “jobs, incomes and spending [are] growing at sustainable rates”. Yet, in relation to the key indicator of income growth, the committee is let down by the statistics it relies on.

Our best measures of what is happening to household incomes are derived from large-scale government studies. Both the Family Resources Survey and the Living Costs and Food Survey provide directly-reported information and allow us to understand patterns across the income distribution – an important distinction given that problem debt is particularly concentrated among those with low and modest incomes. Yet these surveys are annual and take time to report, thereby lacking the timeliness required to inform the MPC’s real-time decision making.

Unfortunately, the timely measure that the Bank instead relies on – Real Household Disposable Income – is not fit for purpose. It doesn’t just measure household income, but universities, charities and trade unions too. And it is deflated using a national accounts measure that has little to do with the actual spending patterns of households. As a result, the chart shows that RHDI per capita has consistently overstated income growth over the past 15 years or so: rising more sharply than the survey data in the pre-crisis years and falling less starkly in the subsequent period.

The cumulative difference in income growth between 1998 and 2013 as measured by the FRS median and the RHDI per capita is almost 9 percentage points. That’s equivalent to around £1,700. In debt terms, that’s the same as the extra annual repayment cost on a £150,000 mortgage following a 1.7 percentage point increase in the interest rate. 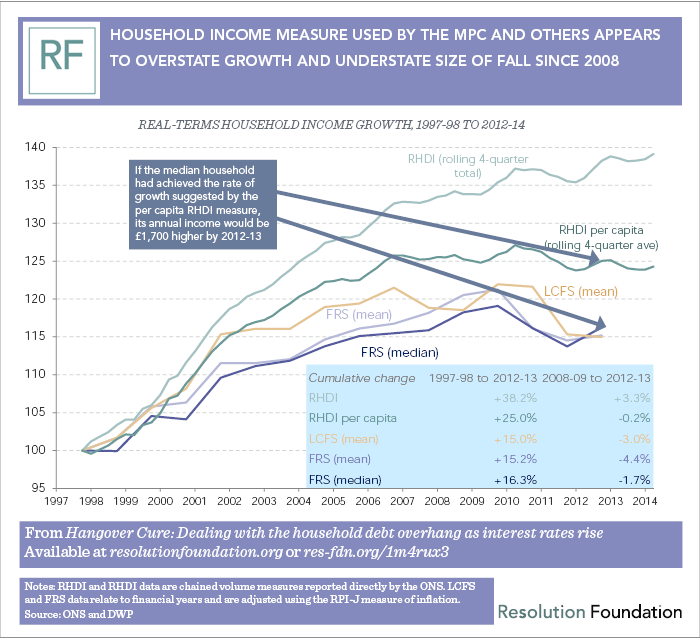 The difficult path that the MPC must steer means that such differences matter. That’s why, alongside a range of recommendations for how we can better prepare for the interest rate rise when it comes, we’ve called on the Bank to work with the ONS to fix its malfunctioning dashboard.

Debates within the MPC in the coming months will be a welcome sign that at least some aspects of the economy are improving. But those discussions must be informed by data that provides the best sense possible of what is really happening in our economy. Pushing too hard on interest rates as a result of misleading data risks generating headlines of the wrong sort.

Matthew Whittaker is chief economist at the Resolution Foundation