Two studies about the impact of migration on the UK economy have been published which – if media reports are to believed – appear to contradict one another. A closer reading of these reports, however, shows that in fact they come to very similar economic conclusions. Even so, from reading them it is possible to suggest very different approaches to migration policy.

One study by Professor Robert Rowthorn led to headlines such as: “Further proof of damage created by immigration” and: “How mass migration hurts us all”.

The second study is a paper published by Lineskova and others in the latest issue of the National Institute Economic Review which led to headlines such as: “Reducing immigration would slow UK economy and lead to tax rises” and: “Cameron’s migration cap would leave Brits poorer and taxes higher”

So clearly the two reports have created space for some news outlets to pick their own truth. But what should we make of these different studies – and what do they contribute to our understanding of the impacts of migration on the economy?

Both studies look at different annual net migration scenarios in the future to provide a picture of the long-term impact of migration on GDP and GDP per capita. The future level of net migration (that is, the difference between immigration and emigration) determines the size and age structure of the UK population.

As shown in Figure 1, if all other things remain equal, a higher level of net migration is expected to lead to a larger UK population (see complete explanation here). 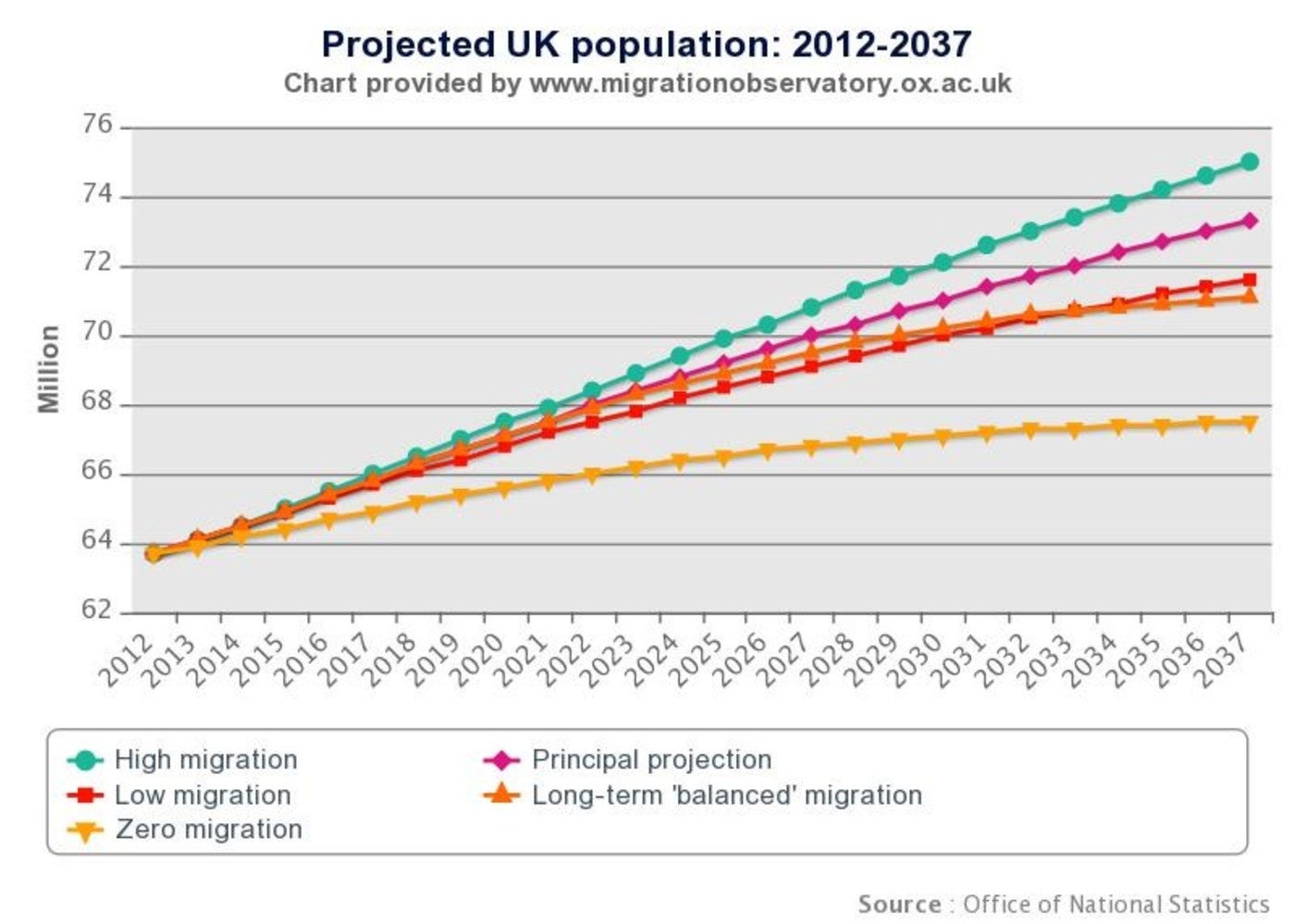 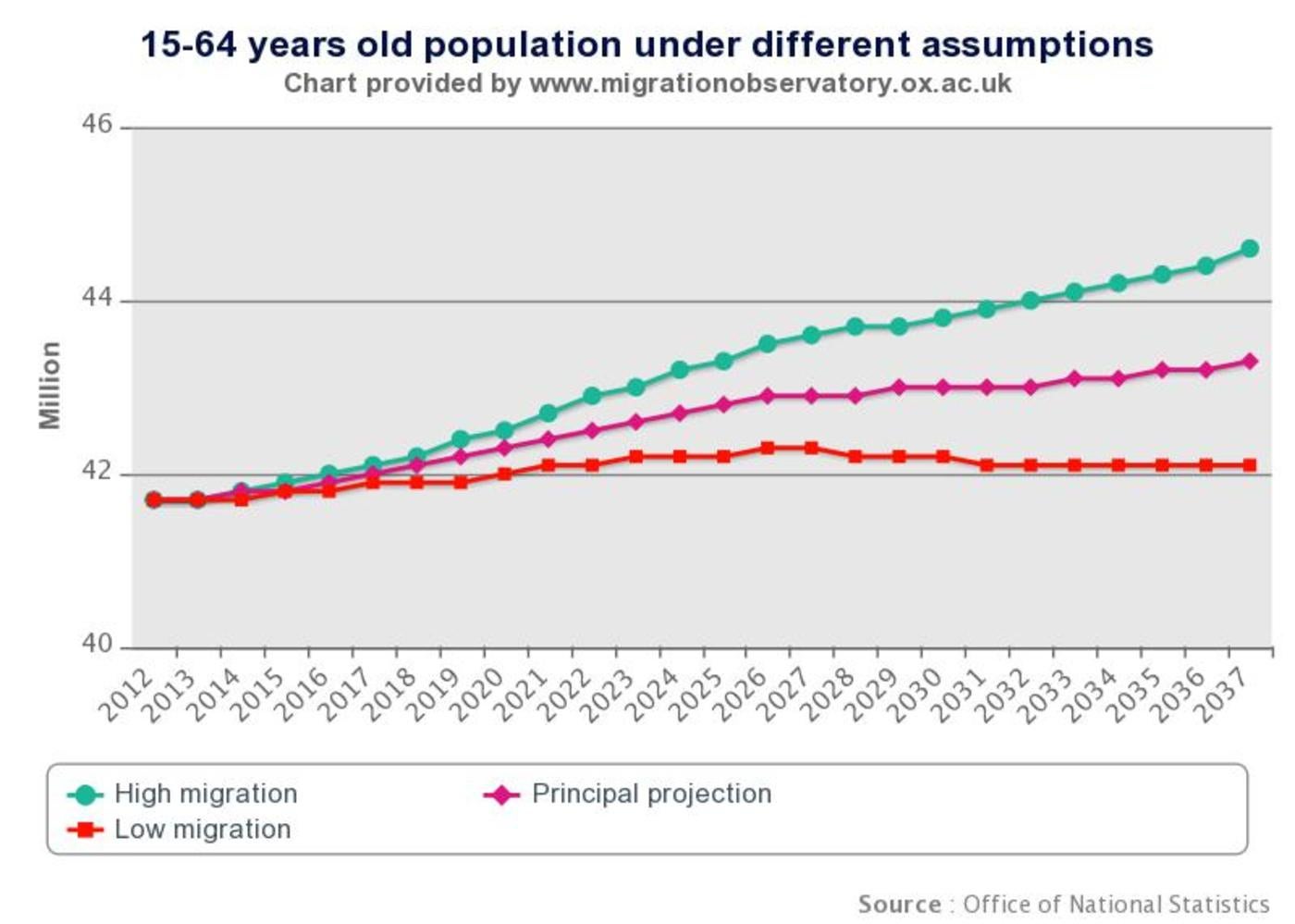 Rowthorn suggests that, given a set of assumptions about employment rates and labour productivity: “GDP per capita is 3% higher in 2087 with high migration than with very low migration”.

Given the impact of net migration on the size and age structure of the UK population it comes as no surprise that both studies conclude that higher net migration will be associated with a higher level of GDP and GDP per capita.

The two studies also look at the long-term potential “fiscal implication” – the impact on UK government finances – of migration to the UK. Rowthorn also looks at the short-term fiscal impact of migration. Rowthorn scrutinises previous analysis from the Office for Budget Responsibility which suggests that lower levels of net migration will lead to higher public sector net debt to GDP (see Figure 3). While Rowthorn does not contest the validity of the OBR estimates, he underlines the high levels of uncertainty related to these estimates. 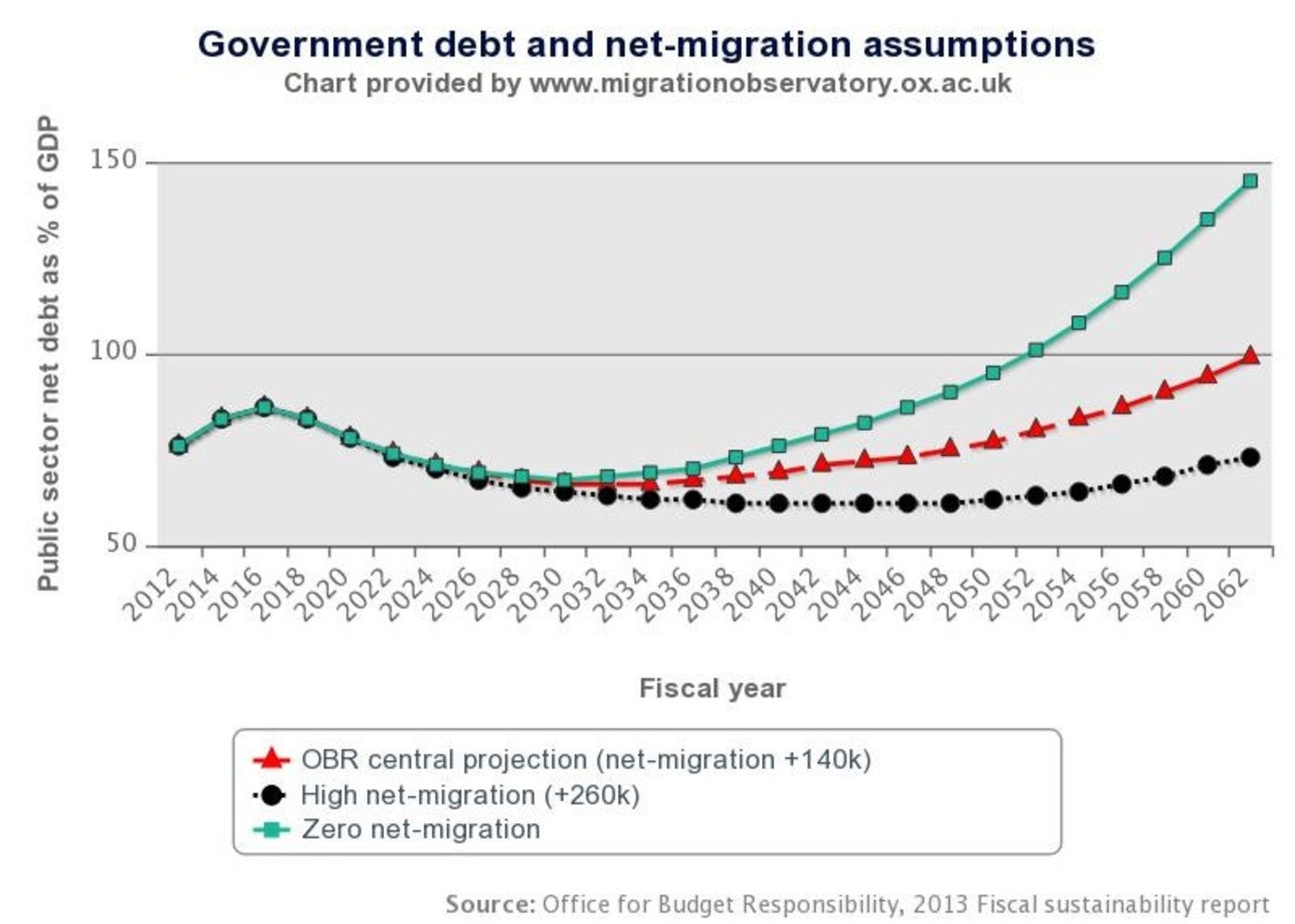 The paper by Lineskova and others suggest that under the lower migration scenario to “keep the government budget balanced, the effective labour income tax rate has to be increased by 2.2 percentage points”. Again, this refers to estimates for 2060.

The Lineskova makes a straightforward economic argument from this about the benefits of migration in maintaining an age structure which supports economic growth. They do not venture into providing policy prescriptions and accept that their analysis does “not take into account the potential social impacts of higher migration”.

Rowthorn, however, emphasises that it may be preferable to have lower levels of migration even at the expense of faster ageing. He suggests that the levels of migration required to increased GDP per capita or lower future public debt are so high that their social impacts may outweigh the positive economic benefits. He points to potential problems such as overcrowding of public facilities (including schools, hospitals, roads), limited supply of housing and strain on natural resources (for example water) as additional reasons for preferring lower levels of migration.

This goes back to the essence of the migration debate in the UK. Economic estimates are important, but limited in that they cannot resolve important judgements about the type of society people want. These preferences over the “sort of place we want to live in” can drive people’s views and choices on migration just as much as the “pure” economic factors.


Carlos Vargas-Silva does not work for, consult to, own shares in or receive funding from any company or organisation that would benefit from this article, and has no relevant affiliations.