Is Tony Blair, the former prime minister and only living Labour leader to win a general election, preparing a possible bid to win back the leadership of his old party? In a wide-ranging essay (which can also be read as a manifesto for progressive transformation) published in this week’s New Statesman, Blair despairs at the state of Labour under Keir Starmer. Starmer “lacks a compelling economic message”, Blair writes. He is “sensible but not radical” and, on cultural issues, he is in thrall to the “woke left”.

Fourteen years after he left Downing Street, Tony Blair evidently believes he has a role to play in the future of the Labour Party, and possibly the country. Friends of Blair describe him as “ready and willing to play a decisive part” in the party’s development. Blair is understood to see Labour’s current path under Starmer as a recipe for “inevitable and possibly cataclysmic disaster” at the next election.

Blair’s allies concede that it is unclear how the former prime minister might become Labour leader once again. Nevertheless, he is eager to play a major role in Labour politics. His camp believe that “an electric shock” is necessary to prevent Labour sleepwalking to yet another electoral defeat. As one Blair ally puts it, “This is the best manifesto out there for a Labour victory in two years’ time – who’s written a better one?” 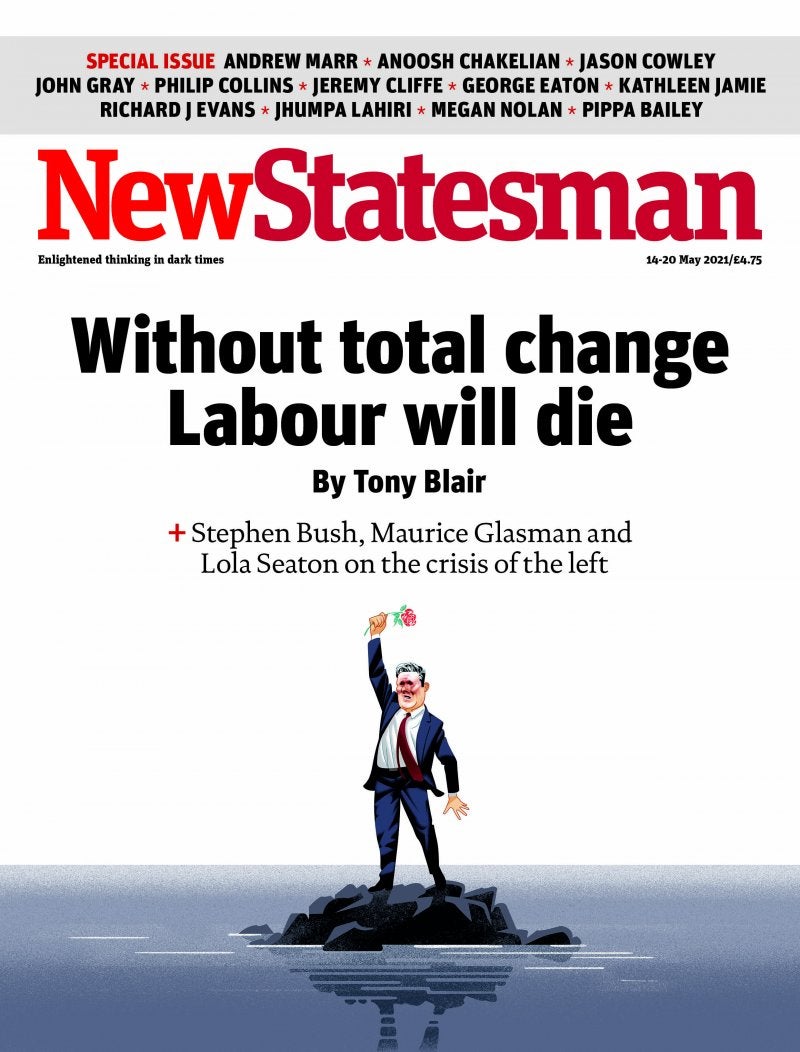 In his New Statesman essay, Blair addresses the speculation around Starmer’s leadership in the wake of Labour’s by-election defeat last week in Hartlepool. Starmer, writes Blair, is “struggling to break through with the public, and last week’s elections are a major setback”, with Labour now “asking whether Keir is the right leader”.

Far from backing Starmer, Blair implicitly accepts his inevitable failure. But Labour, Blair writes, “won’t revive simply by a change of leader.” What the party needs is a “total deconstruction and reconstruction. Nothing less will do.”

“Corbyn was radical but not sensible,” Blair writes, while “Keir seems sensible but not radical. Starmer’s core economic message, says Blair, is threadbare: “‘Spend more’ is a weak slogan when the Tory Government is already spending around record levels.” And Labour’s cultural message, says the former prime minister, is being defined “by the ‘woke’ left, whose every statement gets cut-through courtesy of the right.”

A vacuum of leadership means that the “progressive running” is not being made not by Labour’s leader, argues Blair, but by “the new radical left with the ‘moderates’ dragged along behind, uncomfortably mouthing a watered down version of the left’s policies.” Labour is, he implies, in a leaderless slide away from the centre ground.

Blair’s comments on the “woke left” are both forceful in themselves and damning of Starmer. The current Labour leader, Blair makes clear, has failed to counteract the woke left’s spirit of intolerance and contempt for popular support. As a consequence, Labour has been reduced to offering a social message of “extreme identity and anti-police politics which, for large swathes of people, is actually voter repellent”.

Young progressives, suggests Blair, have “defaulted to issues around culture, gender, race and identity” precisely because Labour has failed to offer them an economic programme that is both radical and practical. Starmer’s empty cultural politics follow from his failure to offer any economic vision.

Blair’s analysis of Starmer is withering in its lack of support. His view of Corbyn is unsurprisingly scathing – he describes the former Labour leader as “a classic protest politician completely unsuited to leadership let alone governing” –  but his judgement of Starmer is only marginally more positive. While he credits Starmer with being “intelligent, capable, [and] moderate-minded”, his tone is cursory and faintly mocking. He offers no further praise other than to say that Starmer “looks and sounds sensible”.

In his rejection of the “‘woke’  left”, Blair goes further than many British and American leaders on the liberal-left. “A progressive party seeking power which looks askance at the likes of Trevor Phillips, Sara Khan, or JK Rowling, is not going to win,” Blair writes, adding that people are “suspicious that behind the agenda of many of the culture warriors on the left lies an ideology they find alien and extreme”. “‘Defund the police’”, Blair says, “may be the left’s most damaging political slogan since ‘the dictatorship of the proletariat’.”

Moderates, stresses Blair,  cannot afford to ignore the alienating cultural politics of the left. People do not like their country, their flag or their history disrespected”, he writes.

And if leaders on  the right evince pride in Britain, while those on the left speak of pride only in embarrassment, it is the left who suffer.. Starmer’s failure to deal with the woke left means that it is the right, argues Blair, who are offering a “powerful cultural message around defending flag, family and fireside traditional values”.

For Blair, a winner of three general elections, the woke left’s approach to politics is self-defeating. People want to fight racism, writes the former prime minister, and institutions such as the police and Armed Forces commit wrongdoing. But “people like common sense, proportion and reason”. And while they dislike prejudice, they also “dislike extremism in combatting prejudice”. “They’re on their guard for those who they think use any wrongdoing to smear the institutions themselves.”

He goes on: “The correct course for progressives on culture questions is to make a virtue of reason and moderation. To be intolerant of intolerance [and] to eschew gesture politics and slogans. And when they’re accused of being insufficiently supportive of the causes – which is inevitable – to stand up for themselves and make it clear they’re not going to be bullied or pushed around.”

Any such leader, argues the former prime minister, will lose a loud minority, but win a silent majority.

The premise of Blair’s manifesto is simple and stark. Political parties, he argues, “have no divine right to exist”, and progressive parties are facing “extinction across the western world”. No easy parallel can be drawn between Starmer and Joe Biden, who Blair sees as an exception to the rule of progressive demise, and as having only narrowly beaten Trump.

“Trump’s behaviour appeared to have worsened the pandemic; and even then, Trump increased his number of votes, the Republicans took seats in the House and probably only lost control of the Senate thanks to the bizarre post-election antics which ended in the storming of the Capitol. The Biden victory was a heavy reaction not so much against the policies as the comportment of Trump. And in Joe Biden, the Democrats nominated possibly the only potential leader who could have won.”.

After the Hartlepool by-election, and the recent collapse in Starmer’s personal popularity, it is indeed far from clear that Labour have selected a leader comparable with Biden. Blair’s essay will in turn inevitably be read as an offer of leadership to a party in desperate need of it. Written in the weekend after Labour’s election losses, it is an attempt, say Blair’s allies, to jolt the party out of a “chronic complacency: that comfortable defeat is better than radical change and reform”. Without total change, Blair says, Labour will die.

Tony Blair’s essay can be read in full in the forthcoming issue of the New Statesman magazine, subscribe here.