I was thrilled when David Taylor, the head of the Labour Campaign for International Development, asked if he could write about one of the spices in his rack: Sichuan pepper. I’m very keen that other people contribute to this series, whether writing about a spice I have already written about or one I rarely use.

I love Sichuan food but learning how to cook it myself remains firmly on my “to-do” list. Here, David describes its history and his own experiences with the iconic pepper itself.

“Offal? I’m not eating that. No way. It’ll be chewy and horrible.” That was my reaction when my friend tried to get me to try Ox tripe at the Xinjiang Chinese restaurant on Silk Road, Camberwell, several years ago. I used to have a very boring approach to food and to texture in particular – if it wasn’t crispy and crunchy, I didn’t want to know. By contrast, in Chinese cuisine different textures, or a food’s “mouthfeel” or kou gan, are to be celebrated. The dish, served as a cold starter with garlic and chilli oil, was in fact outstanding. It isn’t an exaggeration to say that this single dish turned my perceptions of food completely upside down, and I didn’t need any persuading when my friend suggested our next restaurant be a different type of Chinese cuisine – Sichuan food. I’ve been obsessed with it ever since.

Fast forward to September last year and we were standing in the middle of a Sichuan pepper farm halfway up a mountain, barely able to see through the heavy mist, near a small town called Qingxi, about 150 miles from Chengdu in southwest China. If you’ve not had a Sichuan pepper before it’s hard to explain its effect. It is sort of like eating popping candy whilst sucking on an aniseed ball. The Chinese description of its effect is má (麻), or numbing. But that suggests it’s like a type of anaesthetic when, far from dulling your taste buds, it makes them buzz. In fact it is quite literally electric, since the chemical ingredient in it, hydroxy-alpha sanshool, causes a vibration on the lips measured at 50 hertz, the same frequency as the power grid, according to a University College London study. 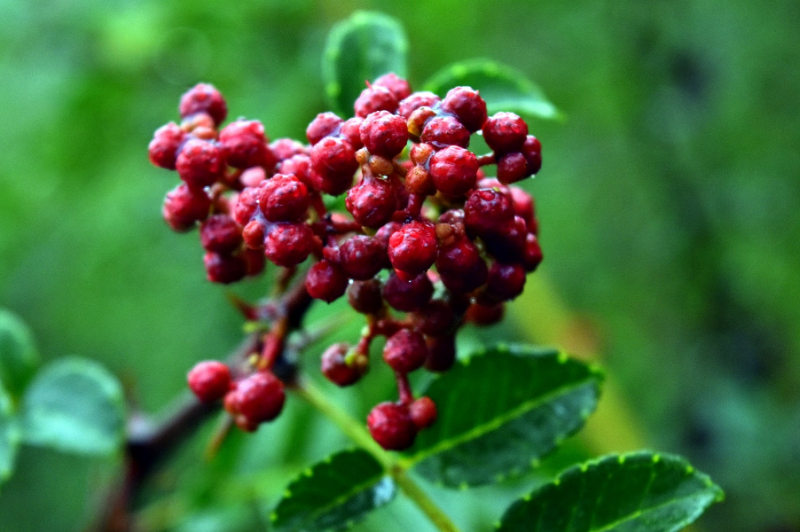 We had come to the pepper farm having read about it in the memoirs of the acclaimed food writer Fuchsia Dunlop, the first westerner to train as a chef in Chengdu’s prestigious Sichuan Higher Institute of Cuisine. We were seeking the finest Sichuan pepper in the land, “Qingxi Tribute Pepper”, so called because the Qing emperors of China used to demand a yearly quota for their banquets back in Beijing. Corrupt officials once demanded so much they pushed the local farmers into poverty but the farmers petitioned the Imperial Court for mercy, and in a rare act of benevolence, the tax was abolished. I had come seeking a fairer trade, and thanks to my friend and Chengdu food guide Qinou Zhang, I was able to buy as much as I could possibly fit in the empty suitcase I’d brought on the trip with me.

Thankfully, you don’t have to be that eccentric to get your hands on some Sichuan pepper of your own. It is increasingly found in the spice racks of supermarkets, but if you can get to an Asian supermarket, seek out some Green Sichuan pepper. A newer variety of Sichuan pepper with more of a citrus lime aroma, it tends to pack a bigger, fresher, punch than some of the more traditional red Sichuan pepper I’ve found in the UK. As with most spices they tend to fade with time, so whichever pepper you go for, check for the ones with the longest sell by date.

There is a misconception that to enjoy Sichuan food you need to have a high tolerance of chilli. Whilst it is true that the Sichuanese like to combine the má with the là (辣,meaning spicy), what makes the food so fun is the huge variety of flavours and dishes, designed to complement one another. There is even a sauce called “Strange Flavour” that is spicy, numbing, nutty, sweet, sour and salty all at the same time, which strangely (hence the name) combine in perfect harmony.

As such, my favourite dish to cook with Sichuan pepper is not especially spicy, but wonderfully numbing. Known as Gong Bao, it is the original sweet and sour, before it got dulled for the Western palate. It is really quick and simple to make and you can find the recipe in Fuchsia Dunlop’s beautiful new cookbook, The Food of Sichuan, and on her website. It’s usually made with chicken or prawn but you can swap them for Quorn or tofu for a vegan version, and if you can’t get hold of Chinkiang vinegar then balsamic is a good substitute. The dish has its own prickly politics. It was named after a former Imperial governor Sichuan, Ding Baozhen, whose official title was “Gong Bao” or “Palace Guardian”. Dunlop says the reasons for this are disputed, but some argue it was because he would eat it at a local haunt whenever he went out in disguise to observe the real lives of his constituents (focus groups with food, what is not to love?). Either way, during Mao’s Cultural Revolution the association with an Imperial mandarin was deemed Oldspeak, and it was renamed “fast-fried chicken cubes” or “chicken cubes with seared chillies” until after the madness of those times had abated.

As the lockdown is eases restaurants are going to need all the help they can get. Before this crisis hit there was an increasing number of fantastic Sichuan places, thanks in part to the sizeable number of Chinese students studying in the UK. At the start of the year, such was the prejudice and racism of some, that Chinese for Labour were among those promoting a #IWillEatWithYou campaign to urge people not to avoid Chinese restaurants. The irony is, so incompetent has the government’s handling of coronavirus been, there are real fears those Chinese students won’t return. That could have a knock-on effect on restaurants serving regional Chinese food, including Sichuanese ones. Ever the campaigner I would very much encourage you to seek them out and order delivery, or visit them when they re-open, to help keep them going. Just off Brick Lane, Sichuan Folk is my favourite – serving not only the best Gong Bao to be found in London, but expectation-defying offal, too.

David Taylor is the founder and vice-chair of the Labour Campaign for International Development and tweets at davidtaylor85.

Wasn’t that mouth-watering, and interesting too? One of the golden threads of this series thus far is sourcing – how a lot of the time, the global spice trade thrives by putting barrier after barrier between the grower and the kitchen, adding little of value along the way. I’ll be back next week, tackling black cumin or nigella seeds, but please do get in touch if you’d like to write about a spice: even if it’s been done in this space before.

This week I enjoyed:

Roast chicken from Yasmin Khan’s Zaitoun: The Palestine Kitchen, which really is an astonishingly good recipe book. It has never failed me. On this occasion, I failed Khan, because I didn’t have any raisins, so I used dates instead for the stuffing which I think worked even better, though that’s in large part because I prefer dates to raisins, perhaps due to a childhood of having Sunmaid raisin boxes in my pack lunch every day.

This fortnight I fucked up

Increasingly I’m of the opinion that the best way to eat beetroot is raw: sliced as thin as possible with a mandoline and then incorporated into a salad. I was feeling very smug about finding one of these for under a tenner on the offer, but it’s not risk-free:  this week my beetroot salad came with a large helping of thumb.