Almost three years after the UK voted to leave the EU, and we’re still very much a member – and may be for some time yet. But anybody looking at a chart of net migration could be forgiven for thinking that Brexit did indeed happen in June 2016.

Net migration from the EU has dropped by more than 100,000, although it remains positive. Meanwhile, the hole has at least partially been filled by migrants from outside the EU, whose numbers have returned to the levels of 2011. 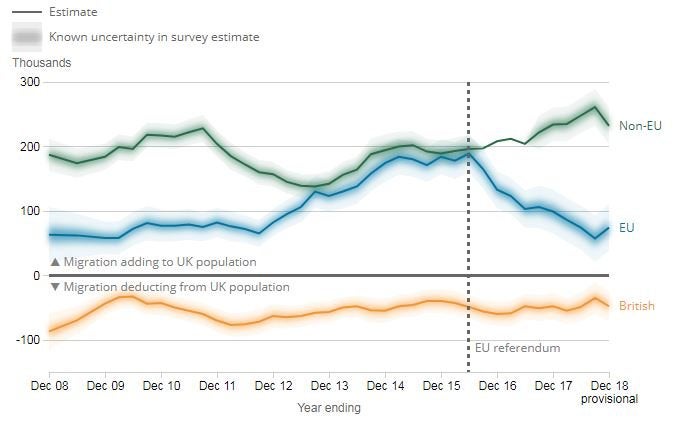 These statistics should be taken with a considerable amount of salt. As I’ve been pointing out for some time, the ONS’s figures on net migration – people entering and leaving the country – are well out of line with the population statistics – its figures on who’s actually here. Indeed, the ONS figures on population, also published today, show an even more dramatic reversal: the number of people born in the EU fell by more than 100,000 in 2018, driven in particular by a reduction in the number of Polish residents. 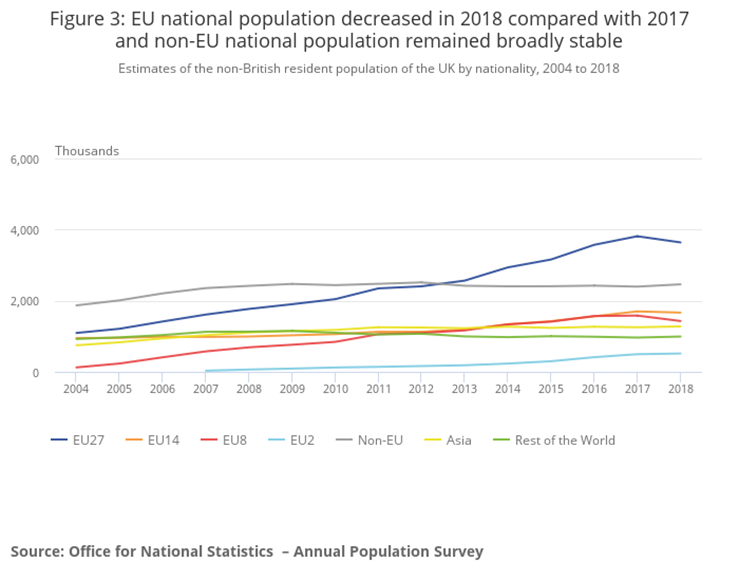 But nonetheless the overall trend is clear. The UK has become much less attractive to European migrants, but, as non-EU migration has risen, the overall level has not fallen nearly as sharply, and remains historically high. In some sectors, especially the NHS, the direct connection between the two is obvious; the number of newly registered nurses from the EU has fallen by about 90 per cent, while those from outside the EU has shot up sharply, and is likely to rise further as the NHS struggles to fill vacancies.

What does that tell us about the future, Brexit or no Brexit?

First, it debunks the myth that Brexit will enable us to choose the migrants we want, selecting by skill level. The end of free movement will give us greater control over who we let in – but they still need to choose us first. If the UK is unattractive to skilled Europeans after Brexit, they won’t come, regardless of what system we have in place, and we will be poorer as a result.

Second, it emphasises the extent to which economic migration is driven by labour demand, as much as if not more than policy. If demand is high in a specific sector, then reduced migration from one source is likely to result in increases from others. So just as EU migration rose when Theresa May imposed steadily tighter restrictions on non-EU migrants – frustrating the government’s attempts to meet its self-imposed target – the fall in EU migration resulting from the Brexit vote has had the reverse effect. While the government can constrain supply, demand matters as least as much.

Third, it suggests that the view that employers simply hire Europeans because it’s cheaper and easier than hiring Brits, and that ending free movement will force them to recruit locally, is optimistic to the point of naivety. It’s neither cheap nor easy to recruit non-EU migrants, who have to jump through numerous bureaucratic hoops and pay substantial fees.

It hardly seems plausible that employers would choose to turn to them if it was relatively painless to substitute British workers instead. Again, this is particularly obvious in sectors like nursing, where government policy – years of pay cuts and the abolition of bursaries – has directly reduced domestic supply. But it is also the case in much of the private sector.

Fourth – and as direct consequence of the first three – it suggests that economic pressures will mean that, if free movement does indeed come to an end, the UK will have to significantly liberalise policy towards economic migrants from outside the EU, rather than hoping that British workers will miraculously fill the gap. Indeed, to a limited extent, this has already happened, with the loosening of the quota on Tier 2 skilled work visas. The Immigration White Paper published in December proposed some further moves, and, just last week, the Home Secretary asked the independent Migration Advisory Committee for advice on whether the restrictions could be relaxed even further.

The departure of the Prime Minister – by far the most restrictionist member of the cabinet, and the one most associated with policies that prioritise “control” over the needs of the economy – removes the single largest roadblock. After almost a decade in which Theresa May, first as Home Secretary and then as PM, did her best to make the UK as unattractive a destination as possible to foreign workers and students – to the horror of our businesses and universities, and the delight of our competitors – the pendulum may swing decisively back.

So where does that leave us? Immigration and free movement was by far the most important substantive policy issue in the referendum campaign. But while Brexit itself is stuck, when it comes to immigration we seem already to be in a post-Brexit era. Paradoxically, Brexit or no Brexit, future UK immigration flows may look much more like they did before free movement moved to the centre of the UK political debate, with, for example, fewer Poles and more Indians. Perhaps there is hope for Global Britain after all.