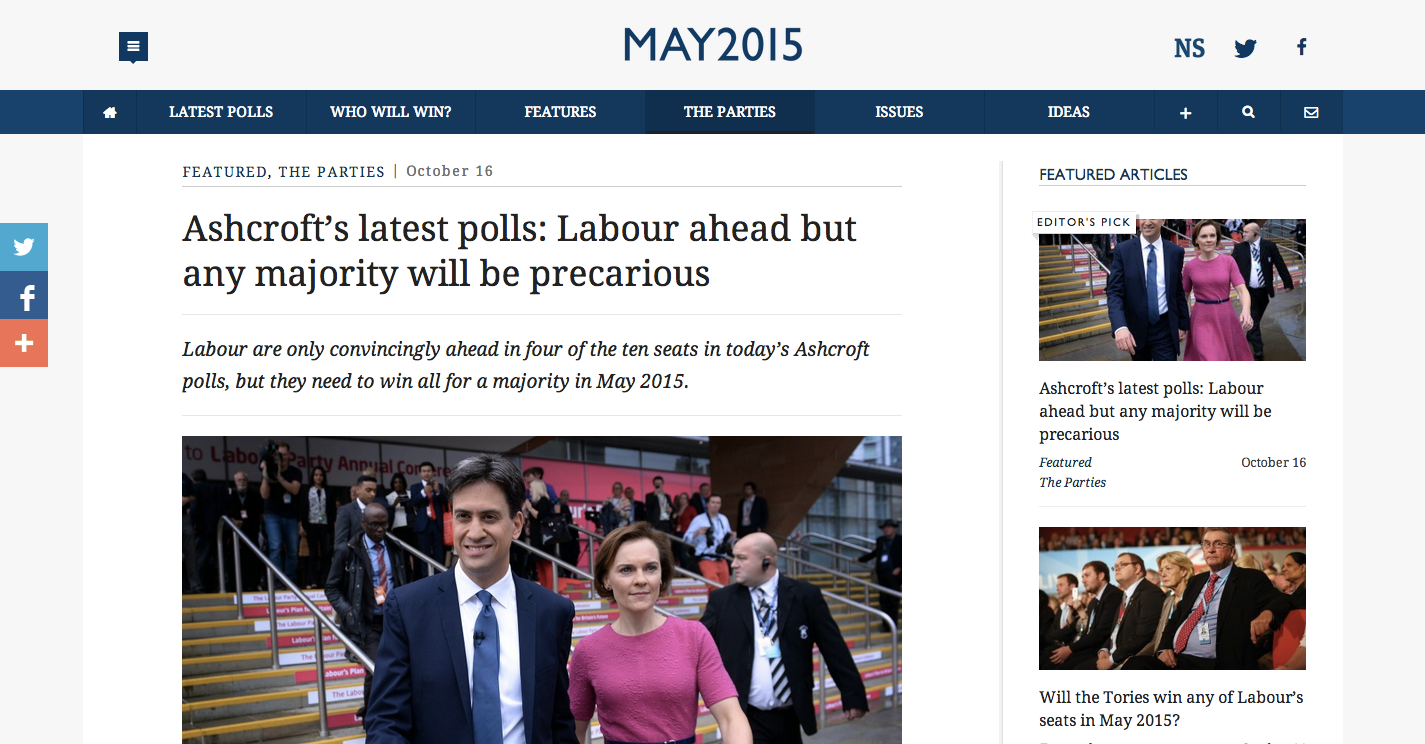 The latest round of Ashcroft polls are out. This is the seventh round of marginals he has conducted since publishing his first batch in late May, and means we now have polls for 76 out of 650 seats.

We don’t need data for about 500 of those seats, we know these will almost certainly be won by Labour or the Tories (or in a few instances – we’re looking at you Orkney and Shetland – by the Lib Dems).

But we need numbers for around 150 seats to start predicting this election. We now have about half of that data.

What do the latest numbers suggest? Ashcroft has polled 10 Tory-held seats that Labour need to win if they are to win a majority (and Corby, which Labour won in a 2012 by-election after Louise Mensch resigned).

This adds to the 20 Tory-held seats he has already polled. He is surveying them in order of “marginality” – i.e. in the order we might expect Labour to win them. He started with the seats the Tories only just won in 2010, and is now onto the 21st to 30th most marginal seats.

This means we now have polls for 30 of the 60 or so Tory seats that Labour needs to win in May 2015. The graph below shows Labour’s lead in these seats. The polls are from late July for the first 12 Tory seats, then late August for the next eight, and today for the final ten.

As you can see, Labour’s lead is declining over time in these seats (indeed the Tories’ only lead is in Gloucester, the 30th most marginal seat). A trendline is one limited way of comparing these seats to past polls, but a better way to start is to compare Labour’s average lead in this batch of polls to previous batches.

The average Labour lead in each set of polls is in light red. It shows that Labour’s lead in today’s polls was 4.5 per cent, which is about half as strong as their previous average leads in Tory seats, of 8.8 per cent (July polls) and 9.5 per cent (August polls).

The Tory-Lab swing in today’s batch of polls is 5 per cent, which, if it held across the next 30 Tory seats Ashcroft is yet to poll, would mean Labour approached the 60 seats they need for a majority. This is what a simple trendline suggests, but we do not yet enough have enough data to make any firm predictions.

A swing of 5 per cent would reverse the similar swing from Labour to the Conservatives in 2010. It would leave Labour on around 320-325 seats, given our other assumptions (they hold onto around 250 of the 258 seats they won in 2010 – which allows for Ukip to take or help the Tories take a few – and pick up 10-15 Lib Dem seats).

This would leave the party on, or just short of, a majority. So today’s polls offer something for both parties. First, Tory hopes of a majority government, which we dismissed on launch last month, continue to look misguided. They look likely to win fewer than 300 seats next year.

The Conservatives look likely to win fewer than 300 seats next year.

But Labour should not be gleeful. While they look likely to be the larger party, any majority they win looks set to be precarious – despite the 35-40 seat advantage our boundaries and differential turnout hand them.

Moreover Labour only lead comfortably in a handful of today’s ten seats. In four they lead by more than seven points, but in four others they are ahead by 4 or fewer. In one they are tied and in one they trail. But they need to win all of these seats.

If they are struggling in these places they could struggle far more in the next set of 30 Tory seats they need. At this point the Tories can only hope for another coalition – and Labour should probably make preparations too.