The New Statesman is pleased to announce that traffic to its recently relaunched website has reached a new record high. In quarter one of 2012, newstatesman.com monthly unique visitors to the site went over 800,000, an increase of 231 per cent since quarter four of 2009, the date of the previous relaunch. For comparison, the Spectator reported 380,000 unique users a month in 2011.

The site’s growth has been aided by a series of exclusives, including Hugh Grant’s exposure of phone-hacking, a previously unseen poem by Ted Hughes, the Archbishop of Canterbury’s attack on the coalition government, Christopher Hitchens’s final interview and David Miliband’s essay on the future of Labour. This has been coupled with the growing popularity of the Staggers rolling blog, launched in December 2009, and a power house of bloggers including David Allen Green, Laurie Penny and Rowenna Davis.

Following the successful relaunch of NewStatesman.com, NS deputy editor Jon Bernstein has been promoted to Digital Director across the Progressive Media group, where he will work on a range of internet and tablet ventures. NS assistant editor Helen Lewis will replace him, with responsibility across both the New Statesman magazine and website.

Michael Gove is air-brushing black people out of history 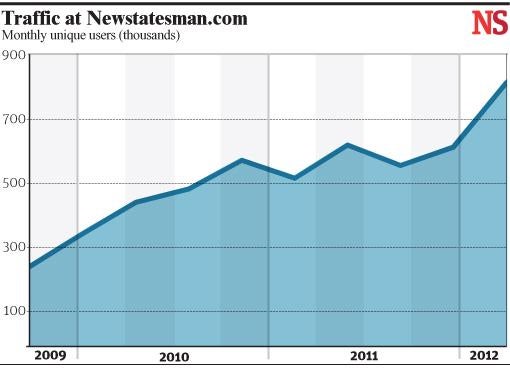