Like many health workers on the pandemic front line, hospital security guard Matt knows that his workplace puts him at greater risk of catching Covid-19.

Unlike other staff at his hospital who are directly employed by the NHS, however, he and his fellow outsourced support workers, such as cleaners, caterers and porters, do not have contracts to help protect them.

Since the 1980s, there has been a tendency for NHS trusts to contract private firms with their own workforces to do non-medical jobs, such as cleaning, catering, couriering and security, which were once done by staff directly employed by the health service. Matt works for one of these contractors, which he preferred not to name.

Should Matt become ill, he is not entitled to more generous protections provided by the NHS and would receive the measly government statutory sick pay (SSP) rate of £95.86 per week. While some – but not all – contractors have adopted coronavirus-specific policies providing staff full pay while self-isolating, the usual rate is in line with the government-mandated minimum, which is the lowest statutory sick pay among OECD nations. 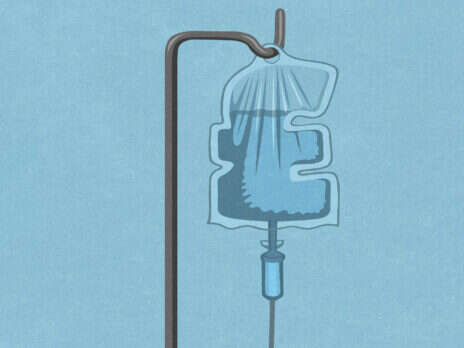 Because of this, Matt is more concerned about being forced to survive on sick pay than becoming sick. This fear lingers in his mind “all the time” while he patrols the wards at Watford General Hospital in Hertfordshire: how will he and his recently furloughed wife cope if he contracts Covid-19?

[See also: “My job is to kill germs”: how the UK’s cleaners are being left to fight coronavirus alone]

“It is a massive worry,” he tells me over the phone while on a work break. Even though he wears full PPE while working, Matt fears the volatility of some patients may put him at risk. “When patients kick off, we don’t know what illnesses they’ve got – there’s only so many safety precautions we can take… They may just not be enough,” he says.

For Matt – who has previously suffered from mental health issues – the psychological burden of financial uncertainty is as heavy as the worry about his health. “Being brutally honest, there’s not a day goes past where I’ll wake up in the morning, and I’m like, ‘I want to go to work’. For 12 hours a day, you’re just worrying [about] what’s going to happen.”

Matt’s employer did not respond to a request for comment, and Watford General Hospital declined to comment.

Paul*, a cleaner at University Hospital Croydon in south London – which outsources cleaning and porter services to the British multinational G4S – believes he and his colleagues are seen as disposable.

“With cleaning, people just see us at the bottom of the ladder,” he says. “Sometimes I just don’t want to go back in.”

Born in the West Midlands to a family originating from Jamaica, Paul is part of the 19.7 per cent of black, Asian and minority ethnic (BAME) workers who provide non-medical NHS services. Early reports into the effects of Covid-19 have revealed that BAME people have been overwhelmingly negatively impacted by the virus, in terms of both health and finances.

[See also: How Britain’s essential but most vulnerable workers were exposed as the virus spread rapidly]

After seeing his colleagues become ill, Paul believes contractors like G4S have no interest in looking out for their workers. “I’ve been very stressed out recently… the way I’m treated, I feel like I’m on a knife-edge.”

When approached for comment, a representative from University Hospital Croydon said G4S staff play an important role in providing “high-quality care” at the hospital. G4S told the New Statesman it is “incredibly grateful” for the efforts of its staff during the pandemic. It also said that, from March 2020, all staff who needed to isolate were given full pay (minimum wage of £8.72 per hour for most staff) while doing so.

In July, after a long and arduous campaign for better protections, workers employed by the facility firm ISS for services at east London’s Homerton Hospital secured full pay for self-isolating staff, and full sick pay protections in line with more generous NHS contracts.

Mary*, who works in domestic services at the hospital, describes how staff members had previously been overloading on paracetamol to force themselves into work while ill.

“It’s horrible because you’re in a hospital, you don’t want to spread infection and disease – but you don’t have a choice,” she says. “Before, we were all living in fear. Any time you’d feel a bit ill you would just get a horrible feeling, [thinking] ‘I hope I don’t get sick, because I can’t afford to’.”

An internal survey conducted by the public services union Unison of staff at Homerton Hospital, prior to the renegotiation of employment terms, makes for stark reading. Nearly one in three staff reported working while sick (32 per cent), 47 per cent said they felt more stressed at work compared with the previous year, and 21 per cent said they had gone into debt in order to pay their rent and bills.

When contacted by the New Statesman, ISS said it “greatly values” the efforts of its workers, and insisted it is a “fair and responsible employer” committed to staff well-being. Homerton Hospital also said it “greatly values” the work of ISS staff, and the trust says it will commit to holding regular reviews of ISS’s people management, in addition to giving staff access to whistleblowing outlets.

However, Unison area organiser Michael Etheridge believes that the outsourcing of previously in-house NHS jobs to firms such as ISS has created a “two-tier” workforce in the health service. Under this system, private companies continually “squeeze every inch of profit” out of staff, he says, while the government pays nothing but lip service: “They [the government] are happy to clap for carers, but clapping doesn’t pay the bills.”

In March last year, the government announced that statutory sick pay for those affected by coronavirus would be paid from day one of illness, rather than the usual day four, and would be extended to anyone instructed to self-isolate and those caring for them.

However, those earning less than £120 per week are ineligible for SSP – leaving an estimated 2 million people without support, according to the Trades Union Congress (TUC).

Ahead of the Chancellor Rishi Sunak’s spending review in November 2020, 30 Labour MPs signed a letter calling for an urgent review of SSP. Richard Burgon, who led the campaign, believes the current support system is “simply not fit for purpose”.

“Our pathetically low level of sick pay is really undermining the public’s efforts to reduce the spread of the virus,” he says. Burgon believes that raising SSP to what he calls the “real living wage” of £340 per week would make a “real difference” to the most vulnerable.

“If people are afraid of the economic consequences of being told to self-isolate in the first place, then how on Earth is the government going to get this pandemic under control?”

Meanwhile, as the government points to the £500 one-off payment introduced as a way of providing financial support to those self-isolating, figures show the majority of applications for this scheme are rejected.

Maria Gonzalez-Merello, a barrister who used to work as a cleaner, says the number of low-paid workers contacting her with employment disputes has doubled since the pandemic hit.

“The workers remain invisible, that’s the bottom line,” she says. “What I have seen are people treated as if they are the lowest of humankind. This is not an exaggeration – it’s heart-breaking.

“I don’t trust the government [to make changes], and I don’t say it in a political way because I’m not interested in politics. But I can only tell you the facts of what I see.”

A government spokesperson said: “We recognise the absolutely vital role that all healthcare workers play in the fight against coronavirus. There is a comprehensive package of financial support in place for those who need to self-isolate including a £500 payment for those on the lowest incomes who have been contacted by NHS Test and Trace.”

*Names have been changed on request of anonymity.