In March this year, after the Leaving Neverland documentary recounted in steady, forensic detail two men’s accusations that Michael Jackson had sexually abused them as children, Paris Jackson took to twitter to defend her father. “Do you really think,” she wrote, “that it’s possible to tear his name down? Do you truly believe they stand a chance?”

It’s a question full of ambivalence. Her plaintive words could just as easily have come from the mouth of someone dejected by the difficulty of holding powerful men to account. Bringing allegations against Michael Jackson was, as many found to their cost, an attempt to do the near-impossible: to bring down an edifice, constructed from a potent mix of reality and fantasy, which no amount of evidence could affect. It is hard to tear a man’s name down. Perhaps all the more so if that man is one you love: if that man is your father.

Since #MeToo much has been said, in public and in private, about men’s behaviour towards women – men who are colleagues, partners, friends, and acquaintances. The focus has been primarily on men in the workplace. Little has been said about these men in the family, and about these men as fathers. This reticence is surprising. Feminism has consistently questioned the uses to which the notion of the private family is put. Why are we so quiet about fathers?

The figure of the good wife is a powerful trope in popular culture; we have seen countless versions of her, standing in intensely performed dignity by the side of a disgraced husband. But we have also seen daughters stoically standing by their fathers: Chelsea Clinton, Ivanka Trump, Bill Cosby’s daughters Ensa, Evin, and Errin. These loyal daughters frequently invoke a powerful image of the loving father as the counterweight to the image of the sexual predator. Though a collective cultural understanding of “the patriarchy” – a term that necessarily encapsulates both of these aspects of masculinity – has developed in the years since #MeToo, still a societal belief persists that men who are caring and paternal cannot also be agents of oppression. 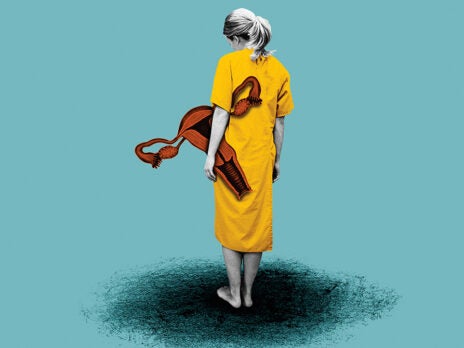 Paris Jackson said in a Rolling Stone interview in 2017, “Nobody but my brothers and I experienced him reading A Light in the Attic to us at night before we went to bed… Nobody experienced him being a father to them. And if they did, the entire perception of him would be completely and forever changed.” The suggestion is that the image of Jackson reading his children a bedtime story should take precedence over any other images we might have of him around children: the knowledge of Jackson as a father is offered as a superior form of knowledge.

Ivanka Trump, for her part, has had to negotiate the president’s offensive comments about women’s bodies, including about her own. She conceded that his “grab them by the pussy” comments were wrong, but said that “the greatest comfort I have is the fact that I know my father.” The sacrosanct realm of the private family is of more importance than what a father might do or say to others. And Lily-Rose Depp, at the peak of scrutiny of Johnny Depp’s alleged violence towards Amber Heard, posted a (now-deleted) photo on Instagram of her as an infant with her father. “My dad is the sweetest most loving person I know,” she wrote in the image’s caption. “He’s been nothing but a wonderful father to my little brother and I, and everyone who knows him would say the same.”

Bill Cosby, too, has weaponised the image of a father’s tenderness towards a daughter as evidence against the possibility of his violence towards other women. Drawing on his portrayal of a genial, lovable patriarch in The Cosby Show, he has called himself “America’s Dad” on social media, writing that “it’s an honour to be called a Father” – the father capitalised, God-like. And he has posted photos online of himself with the grown-up child star of The Cosby Show, Keshia Knight, who, as a 38-year old, accompanied Cosby on his first day in court in 2017. An affectionate photo of the two of them was no doubt designed to invoke the memory of a lovable father and loyal daughter of the TV series. Three of Cosby’s four daughters – Ensa (who died in 2018), Evin, and Errin – have publicly stood by their father. If a daughter respects you, and stands by your side, these images say, then you are not guilty.

I feel for these daughters, cast in an eternal, almost mythological role. We know the figure of the good wife has to wrestle with her loyalty, and often, too, with her own material entanglement with a husband. But a daughter’s struggle is different. She is in some ways more deeply implicated in her father’s nature; she is made of him – not just, or not necessarily, because of the ties of blood, but because of the ties of development.

The mythology of the father is hard to dismantle. All children have to work to distinguish the real parent from the mythologised parent of early life – the parent who, whether benign or malign, looms excessively large, fills out the world. This disentanglement is the work of growing up and of individuating, and reckoning with our parents is the work of a lifetime, requiring a delicate dance between love and hate, loyalty and betrayal. It may be frightening, and perhaps impossible, to counter the father’s power in the face of scandal. We risk losing the father’s love in denouncing his acts or in siding with his critics, and wanting the love of a father – even a bad one – is a desire woven through society.

It may be baffling and disconcerting to watch these good daughters stand by their bad dads, but dismantling the edifice of the father – the patriarch – is no easy feat. And it may be all the more difficult the further within our minds and selves he resides.

Katherine Angel’s “Daddy Issues”, an essay on fathers and feminism, is published by Peninsula Press.