Those Tory Brexiteers, eh. Usually so classy, in touch with reality and forward-thinking to a fault. Behold the pioneers of Global Britain! Freedom!

Well, in a shocking twist, some of them apparently use a nickname shared by white supremacists – according to the BBC’s political editor, anyway.

Following the procession of middle-aged white men and midlife crisis cars to Theresa May’s Chequers residence over the weekend, Laura Kuenssberg tweeted that a few of the Brexiteers in attendance have taken to calling themselves the “Grand Wizards”:

“The ‘Grand Wizards’ (the new name for the Chequer’s daytrippers apparently) also had another meeting this morning, were they discussed again whether they could get on board to back PM’s deal and there was no firm conclusion”

Hilary Mantel: The Tories will never confess to their social wrecking agenda. Labour should make them 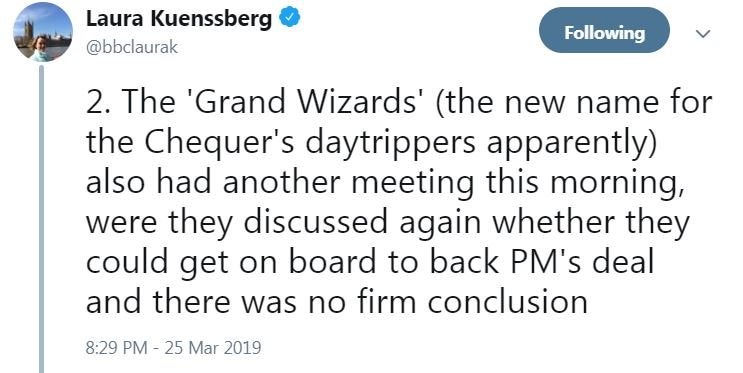 Grand Wizard is a title the US white supremacist Ku Klux Klan used to give its leaders.

As Twitter erupted, Kuenssberg added that she was told this was an informal nickname, with no “intended connection to anything else”.

The Tory MP Steve Baker, a leading backbench Brexiteer in the European Research Group and former Brexit minister, insisted on Twitter that “it’s not for real”.

So there we have it. Not only do hard Brexiteers of the Tory right jovially use the nomenclature of racist organisations, but they do so without even realising, apparently. Gaffe-prone white dudes with zero consideration of racist connotations? Never!