As surprising as it may seem to British commentators caught up in their own psychodrama, Brexit is not the main issue keeping European leaders awake at night. A stagnant economy, the rise of China, and the huge divides between member states on how to deal with these issues are at the top of most EU leaders’ minds.

The Eurozone, having entirely failed to solve any of the structural problems that led to the 2011 debt crisis, is now teetering on the edge of recession. Industrial production in Germany – the powerhouse of the bloc – slowed more sharply than expected in January. Italy has already fallen into recession, partly due to the deflationary economic policy forced on it by Brussels – and its ailing banks may yet be the source of another debt crisis. Economic confidence in the Eurozone has fallen for the ninth month in a row and has now reached its lowest level since 2013.

In this context, Brexit is simply adding insult to injury. The departure of the UK without a deal would harm manufacturers across the continent. With deflationary fiscal policy now institutionalised, the European Central Bank concluding its quantitative easing programme, and productivity outstripping wage growth across much of the bloc, the Eurozone’s current account surplus has been the crutch supporting demand over the last several years. The threat of tariffs on trade with the UK could tip the already weak Eurozone economies over the edge.

But the danger that has EU leaders truly terrified originates from China. In a demonstration of the power dynamics that truly underline the EU project, the French President Emmanuel Macron, German Chancellor Angela Merkel and EU Commission President Jean-Claude Juncker met the Chinese President Xi Jinping this week to discuss relations between the two hegemons. 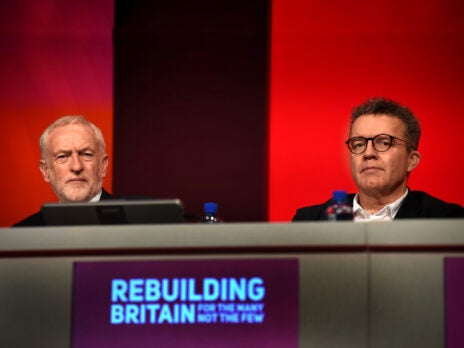 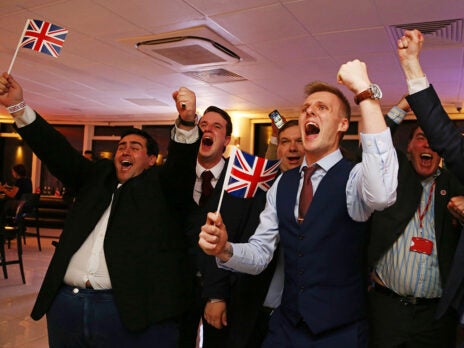 Just days before, the EU published a “strategic outlook” on China in which it called the world’s second-largest economy a “systemic rival” which was “promoting alternative models of governance”.  Yet China is also a huge source of demand in the bloc, both through exports and foreign direct investment.

It is in this context, and in advance of the European elections, that Macron and Merkel have been outlining their visions for the future of the EU. In a speech at the end of February, Merkel outlined plans for an EU-wide industrial strategy in order to counter the threat from Asia.

Macron’s ambitious proposals include providing the EU with a central budget to finance innovation, introducing a social security “shield” for all workers across Europe, increasing defence spending, “protecting” the EU’s borders, and reining in the big tech monopolies. This, he hopes, would support innovation and growth among the EU economies.

It didn’t take long for reality to stymie both leaders’ lofty aims. EU competition policy prevented a merger between two big rail providers – Siemens and Alstom – even as Merkel and other German politicians spoke of the need for a more permissive attitude towards mergers between European companies in order to counter the threat from huge Chinese corporations.

Meanwhile, the Danish Prime Minister Lars Løkke Rasmussen denounced Macron’s plans for a central European budget, which he claimed would “politicise” the EU’s economic policy. He used the rest of his intervention to argue that the EU must stand firm in its commitment to free markets, rather than attempting to “copy and paste” the Chinese model, in a clear rebuke to Merkel. “We shouldn’t,” he said, “pick winners”.

Macron suffered another blow yesterday when separate plans for a central Eurozone budget were watered down, leaving the pot worth perhaps just €22bn over seven years. The plan had been part of a wider French attempt to put the Eurozone on a path towards becoming a true economic union.

There is a familiar pattern to European economic policy. For every step forward European leaders have taken since the financial crisis, they have taken two steps back. While many worry about China, slowing global growth, and a no-deal Brexit, the truly existential questions the EU faces are internal. And they are all about power.

Who will pick up the tab for economic stimulus, financial stability and industrial strategy – northern European states, big business, or southern Europe’s impoverished citizens? Who makes policy – unelected bureaucrats, the European parliament, or member states? And who will determine the future of the bloc should the UK leave – Germany, France, or Brussels?

Europe’s leaders are no closer to answering any of these questions today than they were a decade ago when this crisis began. If they cannot provide answers soon, events might just overtake them. Every minute EU leaders waste brings the European project one step closer to collapse.

@graceblakeley
Grace Blakeley is a staff writer for Tribune and the author of Stolen: How to Save the World from Financialisation.