When a blood-splattered job applicant tumbled into Michael Kovich’s office, covered in dirt, grass and jet fuel, he knew he had to hire him. The candidate, who was seven months late to his interview, had been kidnapped for ransom, after getting into an unlicensed taxi in Brazil. He survived for months at the hands of his captors, eventually earning their trust. When they let their guard down, he escaped. He stole a vehicle and drove off – his captors in hot pursuit.

He made it to the local airport, slammed through the fences, and hot-wired a jet. He fuelled it himself, skipped the safety checks, and took off. Destination: job interview.

Kovich offered him a job on the spot.

On LinkedIn, the world’s largest online professional network, a trend is intensifying – that of influencers sharing fake stories about hiring people. Kovich invented his blood-covered interview candidate to parody an endless stream of posts featuring rain-soaked, teary-eyed people, crawling out of the wreckage of cars and running across motorways to make it to interviews.

The cast of unfortunate characters, from pregnant women with dying spouses to suicidal fathers with starving newborns, differs from post to post, but the format is always the same. A recruiter sees a candidate in a difficult situation, gets them a coffee, and hires them on the spot (no interview required).

Comment after comment follows: “So inspiring!”; “Wow, you’re such an amazing hiring manager!”; “Thank you for being kind to humanity!”

In a dire jobs market, the fantasy of employment is highly lucrative. More than three million UK households are in serious financial difficulty owing to Covid-19. For jobseekers caught in the endless grind of applications and rejections, stories about recruiters taking pity on sobbing candidates who can’t pay their rent are deeply attractive.

The influencers who share these often plagiarised stories – complete with hashtags grating with robotic empathy (“#compassion, #behuman”) – are scamming jobseekers for their attention. For wannabe influencers, branding yourself as an altruistic employer might be the fastest way to grow a platform in a pandemic. 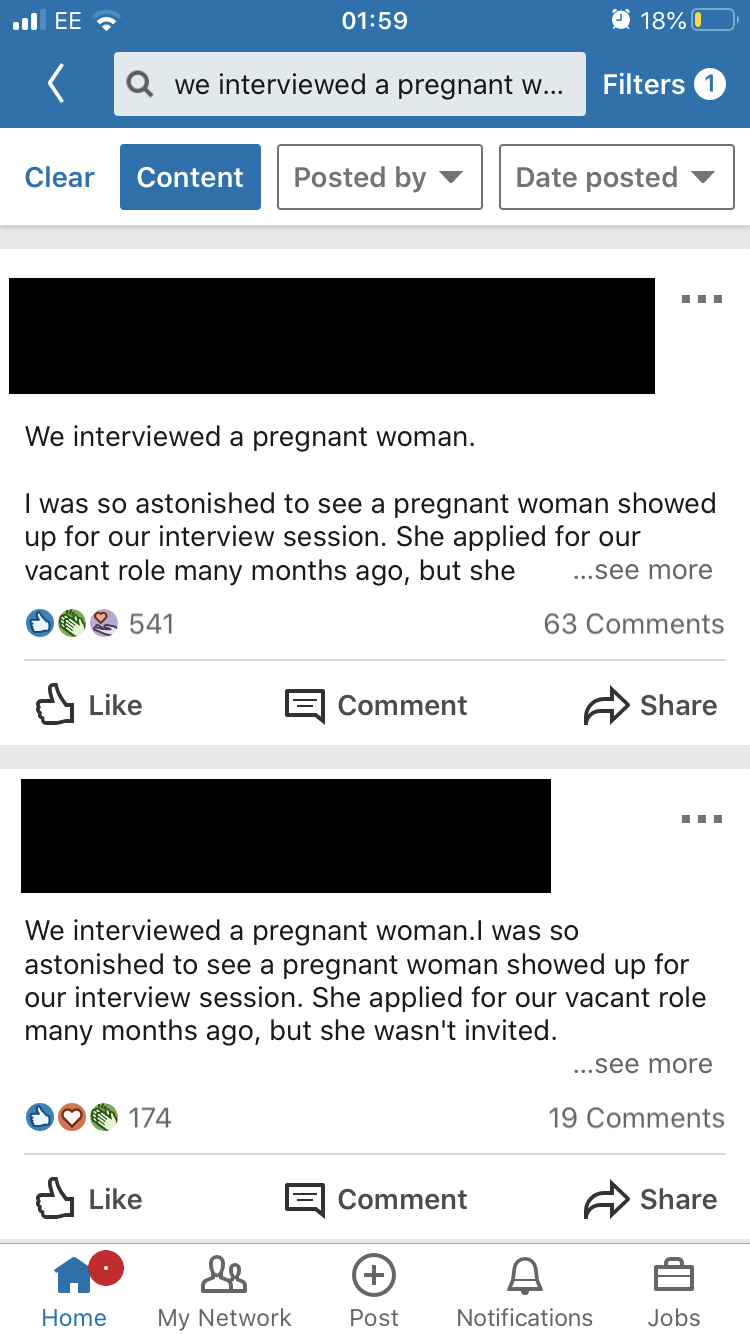 One LinkedIn influencer (with over three million followers) wrote a post inviting jobseekers to like and comment on her posts, not because she’s an influencer, but because she “sincerely cares”. The post, which received over 66,000 reactions, is awash with desperate responses: “I’m a single mother… it’s getting very hard,” reads one. “I badly, urgently, desperately need a job”.

The influencer herself never replies, but bots litter the comments section, their gleaming smiles simply stock images, directing viewers to bogus job sites who are prompted for their personal data.

“The rise in spam, influencer stories and fake news on LinkedIn is very disconcerting,” says Kovich, the founder of the Mauch Chunk Coffee Company, who has been an active LinkedIn user since 2010.

“In the past few days, I’ve seen everything from fake hiring stories to disinformation about the pandemic and job posts which are very clearly fake. It’s reminiscent of Facebook, and the turn that that platform is taking.”

People are increasingly ripping sob stories off Facebook and other social media platforms to use on LinkedIn, says content strategist Chinedu Ihekwoaba. One story (originally from Instagram) about a taxi driver bursting into tears at his first customer in 48 hours, exploded on LinkedIn, with multiple users passing it off as theirs, and reaping likes from people relating to the driver’s pain in these brutal economic times. 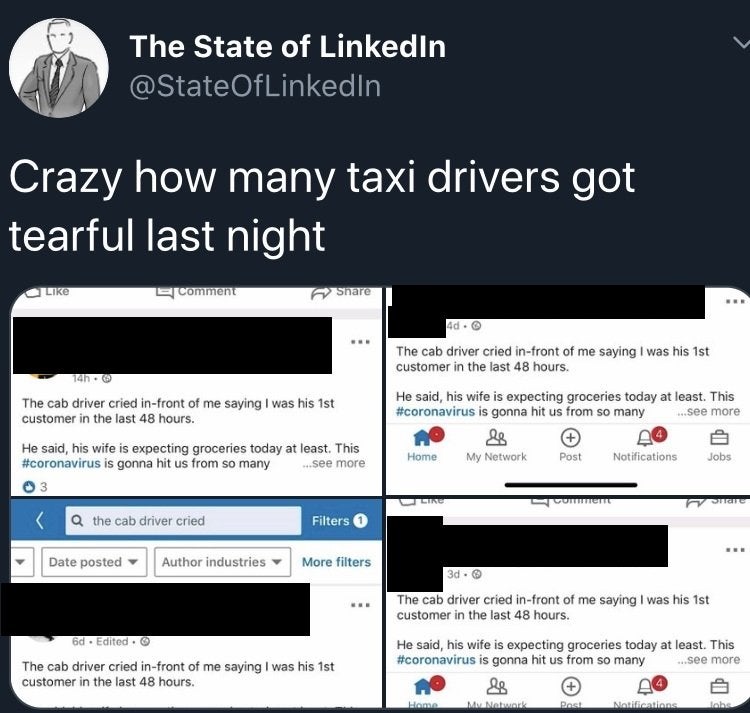 Scott Fortune posts fake jobs on LinkedIn. Not to sell dodgy stuff, or steal CVs, but to get back at the unscrupulous recruiters who have stolen his personal information, time and time again.

“I’d stay up until 3am applying for a job on LinkedIn, and then discover it was fake,” says Fortune, an interim facilities director. “They’d suck up my CV, and spit out a rejection letter in three minutes, so I knew it wasn’t legitimate.”

Fed up with recruiters’ manipulation, Fortune started designing spoof job adverts to mimic the fake ones on LinkedIn – complete with double spacing, dodgy grammar and improbably high salaries. At the end, he writes: “Please message me for more information. Then wait for a response that will never arrive!” – a stab at recruiters who ghost candidates after extracting their personal data.

Yet he is shocked by the sheer volume of people who get in contact with him, thinking that the jobs are genuine. “What got me was the utter desperation. People were calling me from all over the world, telling me that they were about to lose their homes if they didn’t find a job.”

It is striking that, as vacancies become more scarce, our concept of employment as a basic reality shifts. The line between what is real and what is fake fades, aided by the recruiters and influencers co-opting human authenticity for fame. We no longer apply for jobs with the expectation of getting them – we do it with a dull, desperate instinct, as an exercise in the fantasy of wish fulfillment.

One of LinkedIn’s main boasts is that it is too professional for the fake news that plagues platforms such as Facebook. Editor-in-chief of LinkedIn News, Daniel Roth, told Vox in 2016 that, “the difference between Facebook and LinkedIn is the difference between your home and the office” – as if awkward team lunches and a communal coffee machine protect you from the internet’s disrepute.

As Covid-19 ravages an already precarious job market (the gig economy in the UK doubled in 2019 and now accounts for 4.7 million workers), “the office” is becoming an unrecognisable concept, unattainable for millions out of work. As we exchange solid jobs and freelance work with spam messages from “growth hackers” and “global masters”, employment is fast becoming fake news.

The assumption that LinkedIn is too reputable for spam is one which sees the scammer as a cartoon villain, spewing emails about fat-burning chia seeds into your junk folder. The scams and fake stories on LinkedIn are often indistinguishable from empathy, from the genuine expression of human emotion.

Roth said that LinkedIn’s decision to use human editors (unlike Facebook, which replaced its editors with robots in 2016), helps to prevent fake news on the platform. But what about the humans who robotically express compassion to grab jobseekers’ digital attention? Worse than the empathy economy is the fake empathy economy, which capitalises on people’s joblessness without lifting a finger to help them.

A LinkedIn spokesperson said: “We work every day to protect our members and make sure that LinkedIn remains a safe, trusted and professional community. Posting fake content, misinformation and fraudulent jobs are absolutely not acceptable and clear violations of our terms of service.”