It started with a video published on the Home Office Twitter account on Wednesday evening (26 August), showing an animation of deportation flights leaving the UK. The message in the text was that “activist lawyers” are delaying the removal of migrants who have no right to remain in the UK.

The animation was taken down last night (27 August), following a complaint. The Home Office’s Permanent Secretary said that video “should not have been used on an official government channel”. 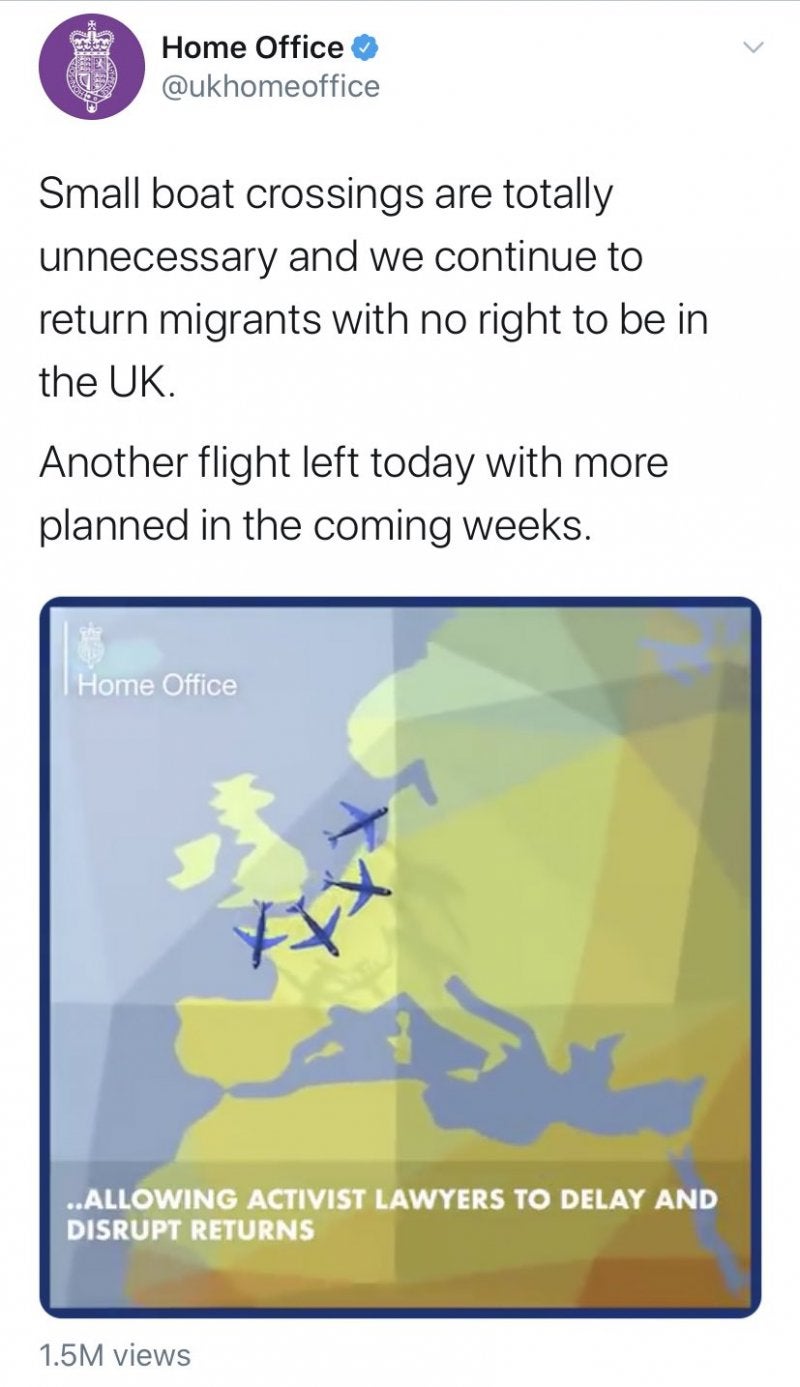 Do not expect this temporary setback to put off Priti Patel, though. The video was viewed more than 1.5 million times before it was taken down. Its point was made. And the Telegraph reports that the Home Secretary is planning on overhauling the UK’s asylum laws, which, it is claimed, are being “exploited by leftie Labour-supporting lawyers”.

What is an “activist lawyer”? It’s difficult to say. My best guess is that the Home Office is referring to those who act in cases against the government, particularly in cases involving asylum, refugee and human rights law. The very worst of them, it seems, are those who succeed on behalf of their clients, for example by gaining a temporary reprieve while a court examines the legality of a decision. Effectively representing a client’s rights has become a political position.

I suppose I am an activist lawyer, by the Home Office’s reckoning. I regularly act for clients against the government, and sometimes I am successful on behalf of my client. I thought I was simply doing a good job.

I sometimes act in asylum cases. These are among the most difficult, personally, as more often than not the outcome means life or death for my client. A bad Home Office decision can lead to a person who needs protection from, for example, religious or political persecution in their home country, being sent back to face potential torture or death.

I have been on both sides of this. For five years, earlier in my career, I regularly acted for government departments. I experienced first-hand the frustration of ministers when their department’s decisions were found to be unlawful by a court. But I can report that for the most part they acted responsibly, and followed legal advice. The Home Office was the exception. It was, and remains, a mess of a department where ministers are so deeply invested in the hostile politics of migration targets that they lose sight of their duty to uphold international rules and laws, set by our parliament, which require refugees to be given sanctuary.

[see also: Coronavirus makes the Immigration Bill look like an even worse idea]

So who, or what, is the real target here? Despite the rhetoric, I would suggest it’s not lawyers; it’s laws, and the rule of law.

For the most part, this is nothing new. A home secretary with an antipathy towards the international and local laws that constrain their actions is not unusual. At the Conservative Party conference nine years ago, Theresa May told the audience that a cat had prevented a man being deported. She said she wasn’t making it up, but it was later shown that she was.

That speech wasn’t about cats, just as the current farrago isn’t about lawyers. May was opposed to human rights laws, which were holding back the untrammelled deportation policies that would have made life easier for her, but not for the thousands who would have been unfairly and dangerously swept up in the “hostile environment” policy – a policy which has, in the wake of the Windrush scandal, been entirely discredited.

After “catgate”, illiberal voices in various Conservative-led governments tried desperately to water down the system of human rights laws and judicial review, a system that effectively holds government to account and scrutinises bad decisions by the executive.

But again and again they have been defeated, often by members of the public such as the Hillsborough families, who spoke out about how human rights laws had helped them achieve justice, or by liberal Tories who pointed out that human rights laws were liberal ideas developed not by “left-wing campaigners” but by dyed-in-the-wool Conservatives such as David Maxwell-Fyfe and Winston Churchill.

In recent years, however, the focus has shifted. In 2013, Chris Grayling described judicial review as a promotional tool for left-wing campaigners. Brexit put the campaign to weaken accountability laws on hold. But the successful channelling of anger against “elites” has enabled the campaign to personify the target of the argument in favour of making ministers even more powerful (for that is the effect of reducing legal protections), and to move the debate away from the countless individuals whose lives have been improved in areas as diverse as inquests, social security benefits, religious rights and freedom of the press.

Late last year, the Supreme Court ruled that the government had unlawfully attempted to shut down parliament for six weeks. It is difficult to imagine a more straightforward case of executive overreach and the importance of the courts in protecting democratic norms. But that case motivated this government to press forward with its plans to “reform” (ie “weaken”) judicial review.

[see also: Proroguing and prerogative: have the courts just upended our constitution?]

This time, it has learned from past mistakes: keep the focus on lawyers, not the people they represent or the laws set by parliament that the courts apply. This has the added bonus of undermining an articulate and competent Leader of the Opposition, who also happens to be a former human rights lawyer.

The Times reports this morning an anonymous (but now familiar-sounding) “government source” railing against a “bunch of particularly loudmouthed lawyers and barristers who spend more time on social media than representing their clients” (presumably, someone would need to spend a lot of time on social media to know this). We will hear more of the same in the coming weeks and months. Lawyers will defend themselves, as they must. But we shouldn’t allow the government to frame this important debate. Because this is not about me as a lawyer, doing a job for my client, but about all of us, as citizens in a democracy that respects the rule of law.