When the pandemic struck, Harry Midgley, 25, had to stop working as a customer service assistant at his local branch of Tesco in Halifax, west Yorkshire.

The NHS advised vulnerable people such as Midgley to stay inside and avoid the spread of Covid-19. He has suffered from an autoimmune disease since the age of 22, thought to have been triggered by post-traumatic stress disorder after experiencing the 2017 terror attack in central Barcelona.

After a month of shielding, he received a call from the supermarket ending his temporary contract. Already a Universal Credit claimant as his shift work had been part-time, Midgley turned to the welfare system to find more work.

On 16 July he received a job opportunity from his work coach via his online journal; the message was sent from Halifax Jobcentre Plus to all claimants in Calderdale. It was for a production operative at the chemical company Bond It in Elland, a town south of Halifax.

Upon closer inspection, however, the company was demanding two weeks of unpaid work before an applicant would be given the chance to interview:

“It just struck me as completely wrong that they would be able to get two weeks unpaid,” Midgley said. “I immediately started thinking: ‘How many people are they going to be able to send through here?’ There doesn’t seem to be any sort of system in place to stop them doing this.”

Midgley, who has written in depth about this experience on his own website, contacted Holly Lynch, the Labour MP for Halifax, about his concerns. On 22 July, she wrote to the Work and Pensions Secretary, Thérèse Coffey, to ask if the Department for Work and Pensions (DWP) “endorses promoting these abhorrent hiring practices”, describing the opportunity as “exploitative”, and calling for the message to be “swiftly removed”.

When originally contacted by the New Statesman on 5 August, a DWP spokesperson said: “A response to the letter from Holly Lynch MP will be sent in due course” and “our Plan for Jobs aims to protect, support and create jobs with a clear focus on ensuring people have the right skills to get into work and progress.”

“One-day employer-led training; the work experience placement comprised six shifts over a two-week period; and, the guaranteed interview was conducted as an informal review, on completion of the work experience… They provide claimants with a job guarantee, providing both they and the employer are satisfied following the placement.” (A letter of the same theme was sent in reply to Lynch on 17 August, which you can read at the end of this piece in an update.)

Applicants are paid their usual Universal Credit when participating.

The job notice does not appear on the Bond It website at all, and its “two week unpaid work trial” process is not mentioned in the application description on job sites outside of the Universal Credit system, such as Totaljobs and Recruit Yorkshire: 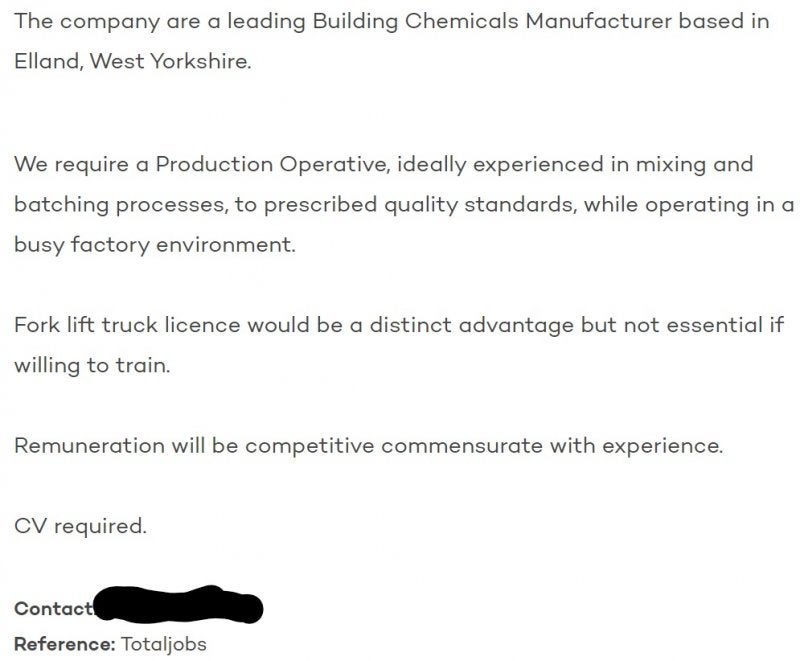 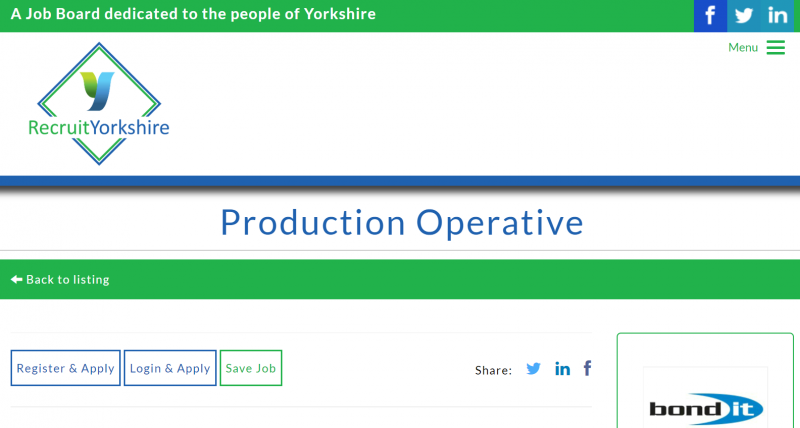 When Midgley emailed the company directly through its website asking about job opportunities, he received no reply. “This made me even more concerned that they were using the Universal Credit system to churn through free labour,” he said.

The New Statesman contacted Bond It on 5 August for comment but received no response. After publication, a representative said: “We will continue to work with Jobcentre Plus to offer meaningful employment to the long-term unemployed and difficult to place… Bond It has a long history of offering young people apprenticeships, many of whom now hold senior management positions within the company…

“We have a strong working relationship with Jobcentre Plus attending their job seeker seminars as a keynote speaker addressing those looking for a career opportunity and providing work experience for the long-term unemployed and disabled.”

The representative also explained the scheme in detail. It offers three days each week to candidates selected by Jobcentre Plus, who are interviewed before they begin at Bond It, and then either after the first three days are offered a full-time role without further interview, or, if there are still reservations, are given a chance to successfully complete the next three days before being offered the job with no further interview. Two people with disabilities have landed the jobs through this process.

The advertisement Midgley received, however, included different details, offering a “two week unpaid work trial” rather than six days, “followed by a guaranteed interview” rather than an interview before beginning at the company.

With around two million more people claiming work-related benefits, more than nine million furloughed since the pandemic hit, and weekly hours worked and job vacancies falling to a record low, requests for free work appear particularly exploitative. In Halifax, 8.1 per cent of the working-age population are receiving Universal Credit (compared with the 6.3 per cent national average).

See also: Anoosh Chakelian on the pointlessness of the five-week wait for Universal Credit

Unpaid work trials in general have long been a controversial practice. Stewart McDonald, the SNP MP for Glasgow South, attempted to introduce legislation to ban unpaid trial shifts in March 2018, but the government stopped his bill from passing.

“I’m still hearing horror stories from the public who are being asked to work hours unpaid, without knowing if they’ll even get the job, if there even is one available,” he wrote in March in the Daily Record, explaining that he would maintain his campaign to change the law.

At present, the guidelines and legislation on such practices are “grey” enough to be exploited by unscrupulous employers, McDonald argued, and it is often people in desperate need of work who lose out, as they feel under pressure to accept unreasonable recruitment practices.

“I was basically being asked to do a day’s work unpaid, and take three days of annual leave from my full-time job to get there, without travel expenses,” said David Thomson, who applied for a role as a trainee reporter at the Lincolnshire Echo and Lincolnshire Live in February.

To apply, he was asked to visit the newsroom for a day to pitch ideas and even write a piece for the publication. The interview would take place at the end of this trial. Thomson, 40, lives in Gourock in the west of Scotland and would have had to take leave from his job managing health insurance claims to travel to and from Lincoln.

“It’s a practice that has to change,” Thomson said. “It felt like a barrier in front of me, stopping from getting a job… It’s kind of exploitation of people as well. Especially with the pandemic, where jobs are even more scarce than they were before, a lot of people will jump through hoops basically and will do anything just to get there.”

The New Statesman contacted Reach PLC, the owner of the Lincolnshire titles, but it had not responded at the time of publication.

In such a tough labour market, the unemployed and low-paid will be increasingly vulnerable to such offers – particularly if they are being directly marketed to Universal Credit claimants.

“The government has moved far too swiftly in introducing conditionality back into our social security system,” says Dr Ruth Patrick, lecturer in social policy and social work at the University of York, who hears parents’ and carers’ day-to-day experiences of the pandemic as part of the Covid Realities research project.

“At a time when people are losing jobs and struggling to access child care, what is needed is financial help and effective support; not the threat of sanctions if you don’t take part in various – and often seemingly unhelpful and unproductive – forms of work-related activity,” she says.

The DWP has offered work trials (when jobseekers are paid their benefits instead of a wage) for some time, yet the opportunity in west Yorkshire does not appear to fit into this category, as there must be an interview for a specific role beforehand, and the employer must only be considering the jobseeker in question for the position.

There are other circumstances, including work experience placements and the sector-based work academy programme, which present jobseekers with unpaid work (though they still receive benefits). Such schemes can be genuinely useful to both employer and claimant, yet the problem lies in whether claimants are informed such opportunities are voluntary (they may accept for fear of being sanctioned), and whether businesses understand and follow the rules.

At the time of publication, the DWP had not clarified which category the job offer in question in this article comes under.

The grey areas and amount of discretion involved in setting up such arrangements with employers creates a potentially exploitative situation for claimants – especially in the context of Covid-19.

Although Midgley was under no obligation to go through the Bond It recruitment process, he was concerned that a notice for as much as 80 unpaid hours’ work would be sent out to jobseekers at all.

“It makes you feel completely worthless, like your situation isn’t taken into account, and you’re just a number to them, a number to make their employment figures look better, rather than helping you actually find a job suitable for you,” he said. “It makes you feel totally disregarded, to be honest.”

A response not brought to the attention of the New Statesman by the time of publication was sent by the minister for employment Mims Davies MP to Lynch on 17 August, stating:

“The course in question was for Bond IT, a local employer that is based in Elland, who contacted the Department for Work and Pensions (DWP) Employer Team to seek help in recruiting Production Operatives and Warehouse Operatives. It was brokered as a two-week, employer-led sector-based work academy and the three elements were presented as follows:

• the work experience placement comprised six 10-hour shifts over a twoweek period, from 6am to 4.30pm with a break; and,

• a guaranteed interview is conducted as an informal review, on completion of the work experience.

Removal of the option for the DWP to support sector-based work academy work experience would seriously disadvantage the claimants who would benefit the most from these opportunities to demonstrate to employers why they should be offered a particular job.”

A spokesperson for Reach commented:

“When the team in Lincolnshire are recruiting a regional trainee, as well as offering them an interview, they also like to offer the candidate the opportunity to experience a newsroom environment. As part of this experience candidates are often invited to suggest a couple of ideas, and are then asked to write them up.  It gives the prospective trainees a chance to fully understand the job they are applying for, and allows the senior editorial team to see how they work.  It often makes for a better overall application process too, with the work they’ve produced becoming a focal point and an opportunity for the candidate to make a better informed evaluation of the company we hope they would like to be part of.”

“It is misleading and disingenuous to suggest that this programme is exploitative. Sector-based Work Academy Programmes help people learn new skills through a mixture of work experience, training, and guarantee an interview for a real job.

“Any participant who signs up to participate in one of these programmes will continue to receive their Universal Credit payments and will have any travel and/or childcare cost covered.”

This article has been updated to reflect responses received after publication from the DWP and Bond It, which were both contacted on 5 August, over a week before publication.