Hundreds of deprived towns in England have missed out on the government’s £3.6bn funding scheme, according to a National Audit Office (NAO) report into the selection process.

Since the Towns Fund was announced in July 2019, to help towns develop stronger local economies, there have been questions about which towns would be chosen for the money, and how.

A selection of 101 towns allowed to bid for up to £25m – or £50m in exceptional circumstances – was announced in September last year, two-thirds of which were found by the Local Government Chronicle to be major battleground constituencies in the upcoming December 2019 general election.

It turns out many of the most-deprived towns as identified by the government’s own selection process were left out of the funding, with relatively affluent towns making the cut, according to the NAO’s revelations. Ministers selected the towns using the criteria drawn up by civil servants merely as “a guide”, and “not the only way to assess eligibility”.

This appears to have given ministers a great deal of discretion, with a place like Cheadle, a Tory marginal in Greater Manchester – on the official “low priority” list for the Towns Fund – receiving funding simply because recent local transport improvements had “primed the area for investment”.

Southport, also in the North West “low priority” group, was selected (identified as “an area with opportunity for investment and closely aligned to the priorities of the Fund”). This is a constituency the Conservatives gained from the Liberal Democrats in 2015, and have retained since.

Both of these towns’ scores on the Index of Multiple Deprivation were also part of the reasoning, yet crucially this measure was taken into account for all the towns under consideration, some of which had high scores that missed out on funding. For example, Burnley is the ninth most deprived local authority based on its Index of Multiple Deprivation score, but was not selected for the fund.

Stapleford, another “low priority” town chosen for funding, is in the East Midlands seat of Broxtowe – once a hyper-marginal that the Tories held onto by just 863 votes in 2017 (the majority increased to over 5,000 last year).

This is not to say those towns do not deserve funding, but suggests a lack of consistency in the process.

“This NAO report shows that some of the most deprived towns in England will be left behind once again,” commented Meg Hillier, chair of the Public Accounts Committee.

She accused the government of ruling out “nine out of ten towns with no explanation” before the process even began, referring to the whittling down of all 1,082 towns in England to 101: a list which the NAO finds was published “without the underlying information to support the selection”.

“Some relatively affluent towns are still in the running,” she added. “Ministers relied on flimsy, cherry-picked evidence to choose the lucky towns. Those that lost out have not yet had the chance to make their case.”

There are highly varying levels of deprivation amongst the chosen towns, according to analysis conducted for the New Statesman by the Bennett Institute for Public Policy, University of Cambridge. 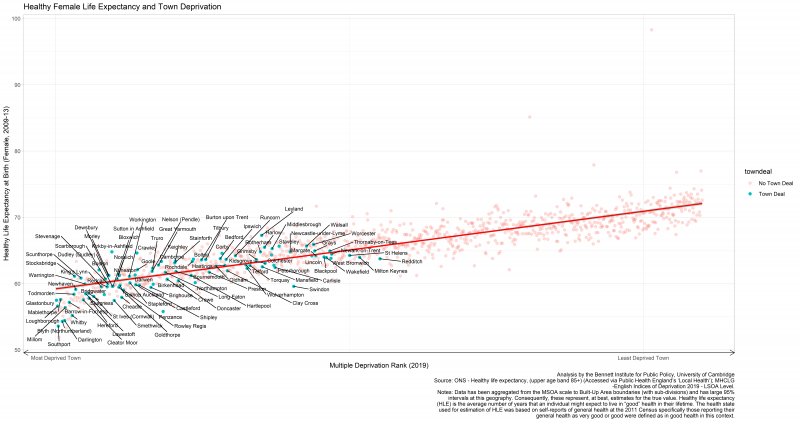 Graph by the Bennett Institute for Public Policy, University of Cambridge

“The government’s judgements about the Towns Fund have been formed in relation to a fairly narrow set of economic priorities: including productivity, skills and income levels,” says Ben Goodair of the Bennett Institute.

He suggests gaining a “broader understanding of the welfare of a place, taking into account its natural assets and levels of social capital, and the kinds of health outcomes associated with it”, would give a more holistic picture of different towns’ needs.

For example, Thurnscoe in South Yorkshire has the lowest average healthy life expectancy for both female and male populations – roughly 14 years shorter than the average for all towns in England. Ilfracombe in Devon reports the third highest rates of hospitalisations for intentional self-harm of any town in England.

Both of these towns are in the Bennett Institute’s top hundred most-deprived towns according to its own analysis of the Multiple Deprivation ranking (with Thurnscoe in the top ten). “These are places that may well be feeling aggrieved by these decisions,” warns Goodair.

“This adds to the challenges facing the government in legitimating its final selection, given the decision to overlook some places which appear to be more economically deprived, but do not fit the flexible criteria which the government has used to determine its final allocation.”

The Ministry of Housing, Communities and Local Government told the Guardian that the NAO’s report shows “the more affluent half of towns were ruled out, and the 40 most-deprived towns were rightly favoured”, and described the process as “comprehensive, robust and fair”.