Fears that global capitalism has entered a phase of “secular stagnation” — a long period of little or no economic growth — were high even before the Covid-19 pandemic. But a Bank of England research paper published in January argues that the situation could be even worse.

Paul Schmelzing, a visiting economic historian from Harvard University, has produced a comprehensive survey of long-term interest rates going back to the 14th century. He concludes that yields on government debt — the figure that traditionally puts a “floor” under all private sector profits — will go permanently negative by the middle of the century, and go on falling.

His research has major implications, not only for our policy response to the pandemic slump, but for the future of capitalism itself. If Schmelzing’s figures are right, one of the most hallowed assumptions in economics — that there is a natural “real” interest rate, and that it is stable over time — is blown away.

By combining the most recent backward projections of GDP and inflation with primary archival research on interest rates, Schmelzing has produced what he claims is the most comprehensive history of the risk-free real interest rate ever written. 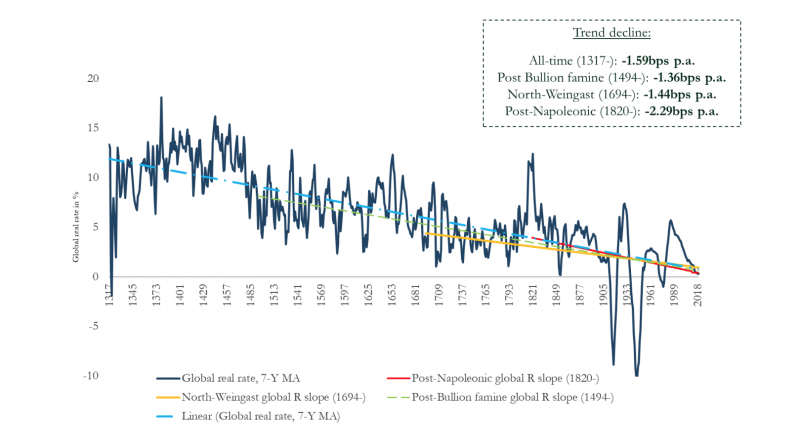 This graph shows that the Florentine bankers who invented modern finance were getting double-digit returns on their loans; Shakespeare’s Shylock, had he existed, would have been getting around 8 per cent; by the time Lenin was railing against the parasitic “coupon clippers” of Surrey, they were getting around 4 per cent in real terms. For today’s savers, the number is heading towards zero.

The trend lines also suggest that the decline has been fastest during the last 200 years of industrial development.

Such long-term trend estimates are always half-speculative. The interest rates charged by Lorenzo de Medici are not exactly comparable with those charged by Barclays, because they exist in two completely different social systems (feudalism and capitalism). And though credit-bearing investments were important to the life of the aristocracy (and the clergy) in the feudal system, their wealth was mainly levied from “obligations” paid by peasants in the form of bushels of wheat, chickens, unpaid work or military service.

But Schmelzing’s thesis, if correct, has clear implications for the way we should handle the economic fallout from Covid-19, and the long-term problem of stagnating productivity and falling interest rates that preceded it.

For today’s policymakers, the 50-year problem is that the interest rate on a 10-year US Treasury bond — the least risky investment in the world — has fallen from double-digit highs, during the inflationary crisis of the late 1970s/early 80s, towards zero today. At the same time, the US annual budget deficit as a percentage of GDP, which has been rising under Trump, is now set to rocket.

The sensible question for macro-economists is: what’s causing this slowdown of a system we assumed was dynamic?

The question for policymakers is: how do we find a new model of capitalism that pushes returns on investment higher, and gets the debt down?

The secular stagnation thesis, as argued by former Treasury Secretary Larry Summers, blames demographics and technology. An ageing population doesn’t want to bet its money on risky, entrepreneurial investments — it wants to lend its savings to the government, and the oversupply of savings pushes the cost of borrowing down. Meanwhile, information technology pushes down the cost of starting and running a business, so the actual supply of risky debt is too low.

Others, such as the Berlin-based economist Eckhard Hein, argue that it’s the rise of monopoly power, alongside the crushing of organised labour, that has caused the relentlessly falling blue line.

But what most secular stagnation theorists agree on is that there is something “wrong” with modern capitalism: that the 20 years since the dot-com crash have been an aberration that could be put right with structural changes.

Schmelzing’s challenging conclusion is that the past 20 years have actually been a reversion to the norm. It was the 1950s and 1960s, with their high growth, high productivity and rising inflation, that were the aberration. And that there’s not much we can do about it.

Most provocatively, Schmelzing predicts that before the middle of this century interest rates could go negative not just on lending to governments, but across a wide range of investments — and that they will go on falling.

If this is true, there are three conclusions that should be encouraging for the left: two short-term, and one strategic.

In the short term — and this is being increasingly accepted by mainstream economists — there is little to no risk for the governments of advanced economies to meet the Covid-19 crisis, and the economic slump, with increased government borrowing. Indeed, as Summers argues, high deficits and high spending since the 2008 crisis have probably softened the fall in real interest rates.

Any country with its own currency can get its central bank to manipulate interest payments on government debt downwards — though this means an end to the fiction that central banks are independent, and it raises the risks of currency wars and protectionism.

Politicians trapped in the “how do we pay for it” dilemma should forget about that problem in the short term, and concentrate on making the injection of borrowed money as effective as possible, by accepting it can have big “multiplier” effects if the state itself directs investment.

The second short term implication is that, to meet the challenges of climate change, rising inequality and the need for hugely expanded capacity in the health and social care sectors, we can — again — borrow and spend.

If, during the next few weeks, we can establish a cross-party consensus for the UK to accept a high but stable debt levels of around 100 per cent of GDP, then the left-right battle could then revolve around adding, say, another ten percentage points to that sum, in order to decarbonise the economy rapidly, and to fund universal basic services.

Once you enter the discussions about what’s caused this historic decline in real interest rates, the long-term implications become more clear. Schmelzing, in a media interview, considers the various standard explanations: rising longevity, fewer mercurial monarchs with a penchant for debt defaults, fewer wars and accelerating growth, but concludes none of them properly explain the downward trend.

There is, however, one major economist who theorised the long-term fall in rates of return on capital as a product of technological development. Karl Marx thought specifically that industrial capitalism, with its tendency to replace living human beings with machines, would create a long-term “tendency of the rate of profit to fall”.

For Marx, interest was always a deduction from the profits of productive capital. As long as the ratio of interest-bearing capital to productive capital remained constant, he thought, long-term real interest rates should also be expected to decline.

The “tendency of the rate of profit to fall” theory has come under continuous criticism, even from Marxists — in part because they interpreted it as a one-way prediction rather than a general trend.

“The development of the productive forces, brought about by capital itself in its historical development, at a certain point abolishes the self-valorisation of capital,” Marx wrote in 1857.

Most mainstream economists believe, by contrast, that there is a “natural” interest rate, which is determined by people’s long-term expectations of growth. Rates of growth and real interest rates should move in lockstep and be about the same, the textbooks say. That’s why reality has flummoxed them over the past 20 years, and they have sought answers in changing demographics, or ideas such as the “oversaving” thesis.

But if Schmelzing is right, his chart simply tells the story of the technological maturity of capitalism. In the long run, as I argued in Postcapitalism, it means there are just not going to be rates of return to sustain an economic model based on markets and private ownership.

And while that’s a mind-bender for the mainstream, in the short term it means something much more simple and less challenging: advanced economy countries should stop worrying about the debt, the deficit and “Zimbabwe-style inflation”.

The message to politicians is: spend your way out this soul-draining crisis, and borrow the money now!