A Christmas tree covered in fairy lights is visible through one of the many neat sash windows of number four Matthew Parker Street in Westminster, central London. The grand Edwardian building of red brick and stone detailing, closed off by iron gates, is the Conservative party’s £50m campaign headquarters.

For 24 days, two grandfathers have been sitting all day against its railings on hunger strike. Peter Cole, 76, is an emeritus professor of respiratory medicine at Imperial College London and a doctor who has worked around the world with Médecins Sans Frontières. Marko Stepanov, 67, is an artist from former Yugoslavia who first came to London 1986, where he was taken with the free speech demonstrated at Speaker’s Corner.

On their 23rd day without food, when I meet them, they appear quiet but resolute – wrapped up in waterproofs and perching on picnic chairs in the driving rain. Despite their physical weakness, they insist on holding a black umbrella over my head as we speak.

They are two of the four Extinction Rebellion climate activists worldwide still refusing food, having started nearly a month ago with 500 others in the group’s “global hunger strike”. Having sent seven letters so far to the Prime Minister demanding a meeting, they are still waiting.

Their aim is for the Conservatives to reduce their net zero carbon emission target from 2050 in their manifesto to 2025 (“in 2050 they’ll be sitting in their swimming costumes, paddling – in a relatively short time of CO2 emissions, there will be irreversible changes”, warns Cole.)

This is one of Extinction Rebellion’s three demands, alongside “telling the truth” by declaring the urgency for change, and creating a citizens’ assembly to make policy.

Suited members of staff pace past them, in and out of the building, delivery drivers give them curious glances as they pull out of the driveway in their vans, and a couple of police officers hover nearby.

The only person who greets them each morning is Boris Johnson’s infamous adviser, Dominic Cummings.

“Michael Gove [the former Environment Secretary] passed us on one of the days, we tried to call him but he wouldn’t come over,” says Stepanov.

“The only polite person who comes more or less every day and addresses us, ‘good morning gentleman’, is Dominic Cummings, believe it or not,” he grins. “And he’s probably not even a member of the Tory party! A dark angel, but he’s polite and civilised.” (Cummings is reportedly not a member of any political party.)

“I think he’s a lefty at heart,” smiles Cole, wearily. 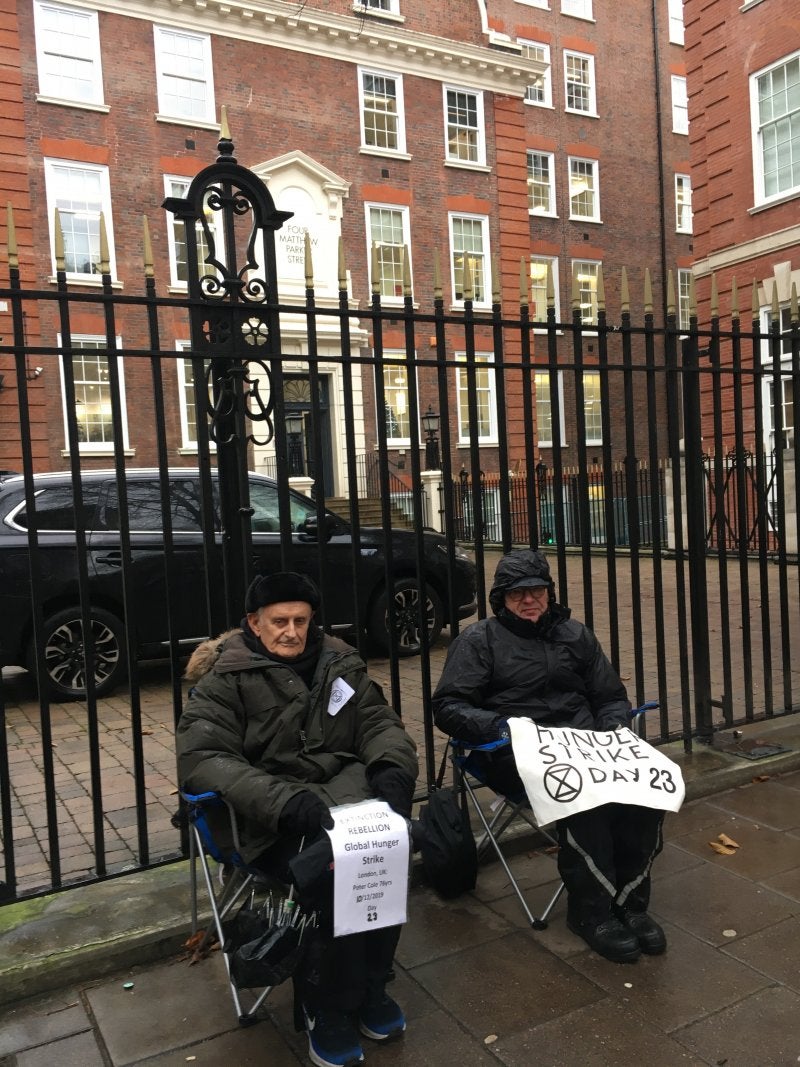 Extinction Rebellion activists have been met by representatives of other political parties, with the shadow chancellor John McDonnell and deputy leader Ed Davey standing in for the Labour and Lib Dem leaders respectively, but addressing the Tories has been like hitting a “brick wall”.

“Tories pass us with their noses in the air, they don’t give us the time of day, and that really makes us annoyed,” says Cole.

This hunger strike takes place at the same time as Extinction Rebellion campaigners dressed as bees are sticking themselves to the parties’ battle buses, and activists gluing 25 breeze blocks onto a road in central London this week to represent “Londoners who die each day as a result of air pollution”.

Yet Cole, who went on civil rights marches in the Sixties in the US south and saw Martin Luther King speak, feels “strongly” that the campaign should be at a “phase where we get the public on board with us”, he tells me.

“I felt one way of doing that was a hunger strike, which inconveniences us rather than the public. And my main reason is my grandchildren.”

He has two grandchildren, aged two and four, and his two sons are in their forties.

“How can I look my daughter and granddaughter in the eye and say I’ve done nothing to remedy this catastrophe which is coming?” adds Stepanov, whose daughter is 37 and granddaughter is nine. “As an individual you can’t always do anything effective – when this possibility of a hunger strike came up, I jumped at it.”

Living in the particularly polluted London borough of Tower Hamlets – and knowing the effects of respiratory and infectious diseases from his travels as a doctor – Cole is concerned about the decline in children’s lung capacity.

“They will grow up with that and that will predispose them to other diseases, it will kill them in the end,” he warns. “The Tories had nine or ten years to do something about all these things, climate change, and they’ve done absolutely nothing. So they are, in effect, sacrificing their own children, and killing ours for the sake of politics, for votes, for Brexit.”

Wearing a Russian-style black fur hat and a thick coat he bought for an expedition to study viruses among isolated communities in the Antarctic as a young doctor, Cole looks tired and worn. He now takes “four times” as long to do everyday tasks for want of food.

“It makes you think slower, speak slower and get a bit muddled. Coming out of your flat, going back two or three times because you’ve forgotten something, just disruption,” he smiles. “My hobby is dancing Argentine tango, and I really don’t feel that I can do that.”

Family, friends and other members of the movement are worried about the hunger strikers’ health. On a bad day, Cole feels “spaced out, tired, cold” and can hardly move. “It’s hell,” he says.

They plan to stop and eat the day following the election, though Stepanov says grimly that “we can hunger strike til we die” if it would mean solutions to climate change globally, with Britain leading the way. “But I think we’ve exhausted our influence.”

In what many activists hoped would be Britain’s first climate change election, the Prime Minister ducked a televised debate on the subject – and neither he nor Jeremy Corbyn were asked about it during the BBC’s final head-to-head.

And every day of the election campaign, these men slowly starving on the Conservatives’ doorstep have been ignored.

Perhaps the political operatives passing them are afraid. “Of the three demands, I think Conservatives are probably more scared of the third, the citizens’ assembly, because this takes the power out of the 1 per cent, and puts it in the citizens’ hands,” observes Cole. “We have to change the system to a more sustainable, sharing economy, rather than growth, growth, growth, GDP.

“It’s ridiculous. We’ve got to act now, and as a doctor I always think prevention is better than cure – and it’s cheaper.”