If you had to pick one image that summed up all that’s currently wrong with Western Civilisation, what would it show? Greek families begging on the streets? Guantanamo? The thousands of victims of child abuse that await protection?

Or an undulating Kim Kardashian in her practised, projectile T-and-A pose?

According to the very learned Dr Helen Wright, former President of the Girls’ School Association, our moral pillars are crumbling under the voluptuous threat of Ms Kardashian: “The descent of Western civilisation can practically be read into [her] every curve”. And here was I worrying about unemployment (around one in 10 are jobless in the eurozone alone) and whether the new Greek government will say “yamas!” to meeting debt repayments.

Wright’s speech to the Institute of Development Professionals in Education makes the obvious but reasonable point that girls are growing up to value aesthetics over intellect due to a dearth of decent role models and society’s (or rather the market’s) overvaluing of female beauty – which if you take a look at history, Dr Wright, you’ll see is nothing new, whatever your fears about premature sexualisation may lead you to believe otherwise. 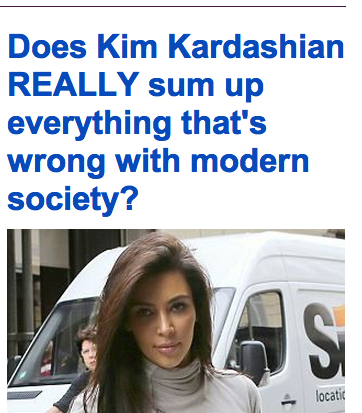 But for a supposedly clever woman, Wright’s hyperbole reveals a facile and paranoically conservative analysis. I mean, is a knicker-flashing Kim really responsible for social deprivation, or child poverty? Is Western Civilisation’s biggest problem really that women waste too much time worrying about their cellulite? And if we flibbertigibbets were all in drab, convently garb, would that rid our minds of frivolous thoughts, and mean that we’d be free of childcare conundrums or sexual harassment or any of the other things that stop us from reaching the professional echelons, come adulthood?

Quoted in The Times yesterday (£), Wright dissects a Zoo cover image of Kim that has so discombobulated her thus: “Officially the hottest woman in the world? Really? Is this what we want our young people to aim for? Is this what success should mean?”

Well, I hate to say it but I’m partial to a bit of Kardashi-bum admiration myself (only in the two-minute breaks I take between tweeting bunk, re-reading Foucault and overeating oatcakes, mind). Which doesn’t mean I consider her successful. Nor a moral role model (I don’t know her, I couldn’t possibly know anything about her personal values). Just that I quite admire her refreshingly un-skinny form.

Wright needs to calm down with the wash-their-faces-in-carbolic-soap maternalism. Piece of advice for you Dr Wright: I went to a girls’ school, and far better than worrying about the nefarious influence of Kardashian and her ilk, is for overly-concerned teachers like yourself to give pupils some more important topics to think about in the first place, as mine did.  You know, like hyperinflation in 1920s Germany. Or the fall of the Soviet Union. Or what happens when puritanical societies use women’s bodies as a moral battleground.

The Bum That Brought Us Social Meltdown, however, probably doesn’t need to be on that syllabus.