The Renew Party, a Remain-backing centrist party that kind of had its thunder stolen by The Independent Group (then Change UK, then Independent Group for Change), and ultimately the Lib Dem revival, has issued a press release about the Brecon & Radnorshire by-election.

Although it aims to run in all elections, it has agreed not to run a candidate in this by-election, “to give a Remain candidate the best chance of winning”.

“In the spirit of cooperation, we will campaign for the agreed Liberal Democrat candidate on a shared platform of remaining in the European Union and radical electoral reform,” said its interim leader, an MEP called Julie Girling, in a statement.

“I’m very pleased to see that a broad Remain coalition is emerging for this upcoming by-election. Renew helped broker a similar arrangement for the Peterborough by-election and were disappointed that the plan did not proceed.”

Indeed, at the Peterborough vote in May, the Lib Dems, Change UK, Greens and Renew were unable to agree on backing an individual candidate during talks down to the wire.

It’s a good sign, then, for future Remain alliances that this has been organised for the Brecon by-election. Although perhaps the disappointment from last time still stings at Renew HQ – their press release’s subject line reads: “JOINT STATEMENT ON PETERBOROUGH BY-ELECTION”. 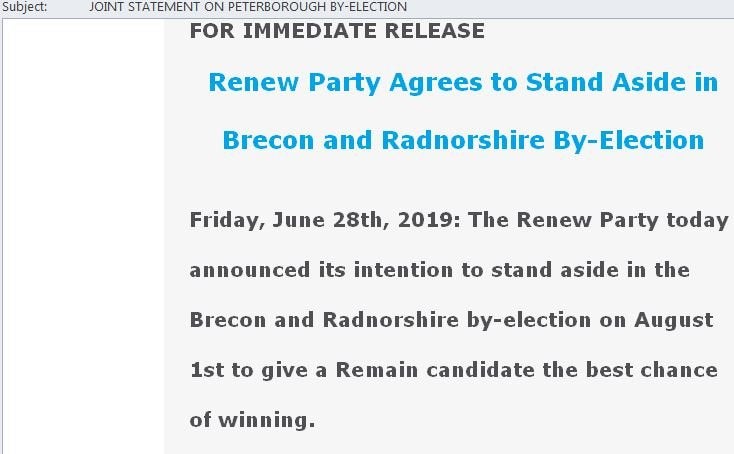 Alas, the statement that never was.

Formerly a Conservative, she was suspended from the party in 2017 and in February 2018 joined the European People’s Party group, while sitting as an independent, until joining Change UK in April 2019. In May 2019, she called on voters to support the Lib Dems, and in June was appointed as interim leader of the Renew Party.

This, your mole suggests, speaks volumes about the difficult path centrist Remainers have followed of late.