The government has released the first images of the temporary Commons chamber in Richmond House, the proposed home of MPs while the Palace of Westminster is refurbished. Yet the artist’s impressions released today suggest that Parliament cannot let go of the toxic adversarial set-up that has put so many people off politics. This could have been a chance to influence the tone of national debate by changing the physical space it happens in. Instead the Parliamentary Estate has replicated the current chamber’s set of opposing benches.

The House of Commons still follows the layout it inherited when it was given St Stephen’s chapel as a meeting place in 1547, and decided to use the choir stalls that were already there. The structure has seeped into the very language we use about politics: if someone switches between the two main parties, we say they are “crossing the floor”.

One of the more famous stories about the chamber is that the front benches are two swords’ lengths apart. That’s what those red lines on the carpet are reputedly about: the very fabric of the Commons, however damp and moth-eaten it is, assumes politicians are only a couple of steps away from having an actual duel. Even though there’s little evidence that’s true, the fact everyone finds it plausible speaks volumes for how we see our political system. The chamber is a physical and structural cue that politics is adversarial.

Our politicians have failed to reach a consensus on how to handle Brexit, because they have to be seen to “win” in the Commons. At the same time, the polemic of UK politics has become increasingly violent in the last three years, to the extent that regular MPs have required police protection from credible threats against them. In this increasingly threatening environment, surely we could have tried a less confrontational arrangement?

Plenty of political chambers favour a U-shape or a cut-out circle with the speaker in the gap. New Zealand and Australia House of Representatives are both U-shaped. The UN is more of a gentle curve. The EU Parliament – like the Scottish Parliament and Welsh Assembly – favours an almost complete circle. 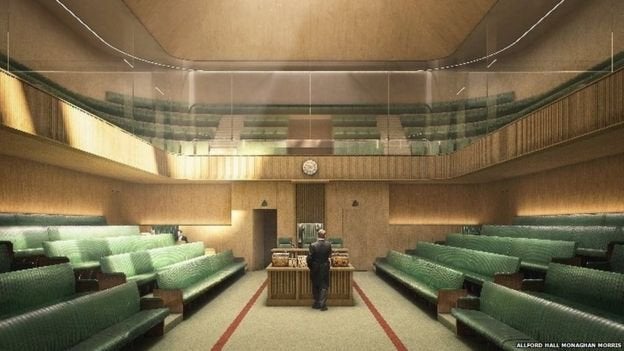 U-shape seating arrangements have been shown to generate an increased sense of community and promote social interaction. It doesn’t automatically mean an end to the two-party state: the US House of Representatives demonstrates that. Nor does it automatically generate consensus: Stormont is in a U-shape, and had not sat for years now. It is, however, a physical arrangement that assumes politicians do not need to be kept from fighting with swords.

There are some positives to the new, temporary chamber. A huge skylight will let daylight into the place, which can only be a positive thing. A gallery runs all around it so the public and press can watch – through glass – the politicians below like a Roman crowd at an amphitheatre. (No details yet on whether the glass will be coated to prevent more super-glued buttocks though.) But the in-the-round balcony just throws the fact the benches themselves replicate the existing combative structure into sharper relief.

Studies have found that the physical arrangement of parliaments both preserves cultural values over time and contributes to the formation of political culture. We currently have an elected House whose physical manifestation – repeated in this temporary chamber – values confrontation over collaboration.

Changing the physical space in which national politics is conducted, even if it had just been for the duration of the works to the Houses of Parliament, would have been a simple way to give space to a different way of conducting politics. It could have helped reset the tone, and encouraged politicians to find new ways of working together. After all, before the Commons moved into St Stephen’s Chapel, it had sat in the octagonal Chapter House of Westminster Abbey.