A new Ipsos MORI survey for the BBC’s Crossing Divides season has shown a remarkable turnaround in attitudes to immigration in Britain.

In 2011, 64 per cent of the British public said that immigration had a negative effect on the country – but by the end of 2018, this more than halved, to just 26 per cent. Many more people now say they’re positive about immigration than negative, a huge reversal of the pattern in 2011. 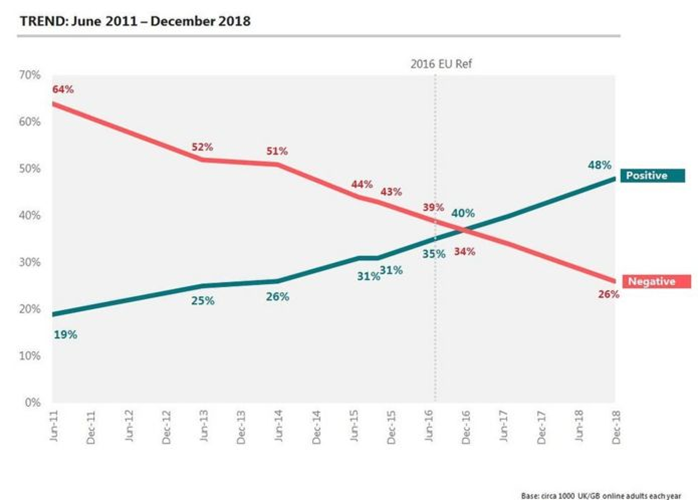 Britons are also now the most positive about immigration from the 27 countries included in the study, jointly with Saudi Arabia – which would have seemed unthinkable only a few years ago. 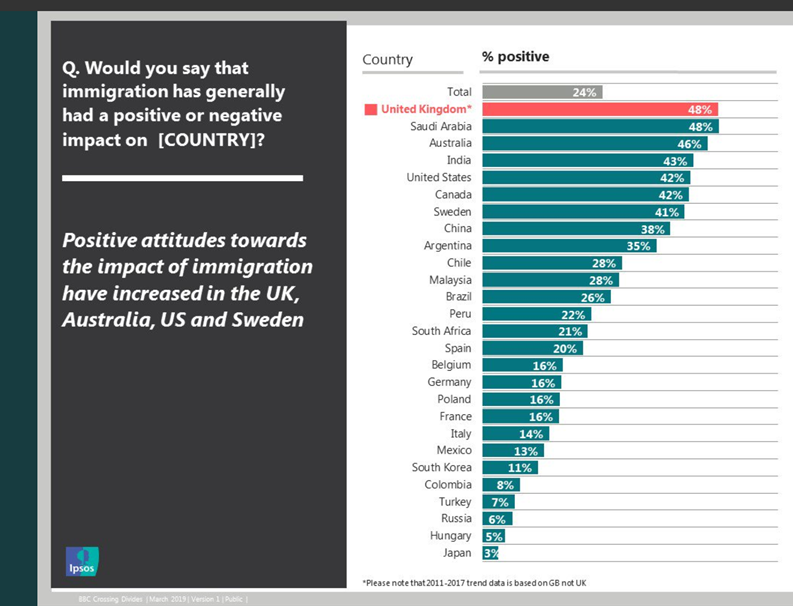 The key question is, why? Is this a real sea change in attitudes, that means we need to rethink future immigration policy – and even Brexit?

Another study by Ipsos MORI suggests it’s not that simple. The survey followed up people who said they’d become more positive about immigration, asking them why, focusing on the two most likely explanations – whether the change was driven by “reassurance” or “regret”.

The first is the idea that people feel they can now say that immigration has positive aspects, because numbers are coming down, or they believe numbers will be lower in the future. Even though net migration has not shifted significantly in reality (lower EU migration has been balanced by increased migration from the rest of the world), the current rhetoric and future promise is certainly of more control, with ending freedom of movement a key “red line” for the PM.

Regret, on the other hand, could be driven by a better understanding of what we’re losing from lower immigration: as warnings of skills shortages and economic impacts increase, and as we think more about what we lose from decreased diversity, the extent to which the country benefits from immigration becomes more obvious. Mirroring that, media coverage and negative slant within immigration stories has declined in the last couple of years.

So we simply asked people who’d become more positive which of these types of reasons explained why they’d changed their views. This is a simple technique, and we need to be cautious about how much people actually understand their own reasoning – but it is a useful indicator.

And as the chart below shows, at 39 per cent and 41 per cent, there is almost perfect balance between the two explanations, with around four in ten citing each of “regret” or “reassurance” reasons. 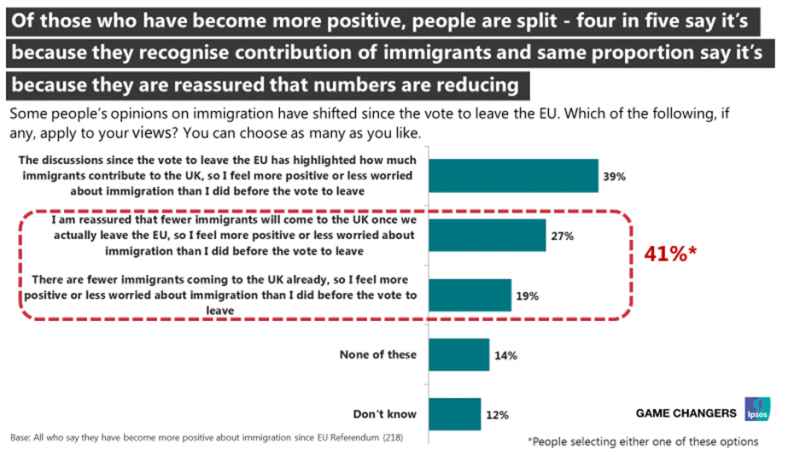 As with so much about immigration attitudes, there is no one clear answer or view, and therefore no single indication for future policy and political direction. The very real trends of increased positivity actually give much less of a clear steer than it first seems.

This interpretation is backed up by other trends in immigration attitudes that have changed much less. For example, the majority of people still want to see immigration reduced: 56 per cent would like lower immigration, only slightly down on 62 per cent in 2015. 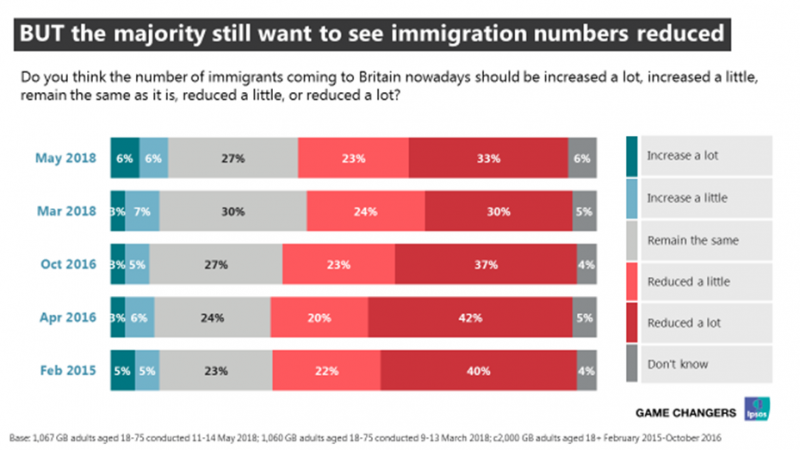 This is a feature of immigration attitudes that we see time and again. It is a polarising issue, a key topic in the referendum vote that split the country down the middle.

There is a case that Brexit was partly a result of ignoring immigration concerns, trying to avoid discussion, rather than either acting to reassure people on control, or challenge their views with a more compelling story on the benefits. Leaving a void in political discussion was the worst possible approach.

Immigration attitudes are divided and complicated, which makes it tempting for politicians to avoid engaging. But the risk for the next steps in immigration policy comes not from listening to apparently fickle and contradictory public opinion, it comes from mishearing or caricaturing it – again.