More than seven decades on, Grace Mbithe still remembers the moment when a press gang abducted her husband from a Kenyan village and forced him into Britain’s armed forces at the height of World War Two. “It would just happen suddenly, one morning,” she said. “If you hid, they would just come back another day.”

Grace, now a widow in her mid-90s, described a lorry driving into their highland village before soldiers jumped out and grabbed as many fit and able men as possible—under the supervision of a white officer.

It would be several years before Grace saw her husband, Stanley, again. During this turbulent time, she was socially isolated and tormented by her in-laws who, believing Grace was infertile, tried to force her out of the family. “We cried a lot when we heard [Stanley] had been captured,” she said. “We were crying because we knew he would not come back. He would die. He left us with a lot of problems. I suffered so much.”

Stanley was not the only man to suffer the injustice of enforced recruitment.

After carving up the continent in the late 19th century, European powers recruited African men to provide internal security and protect their colonies from outside attack. During WWII, Britain used these troops—numbering over 600,000—to fight Axis forces in the Horn of Africa, Madagascar and Burma, as well as using them to provide garrison troops in the Middle East. 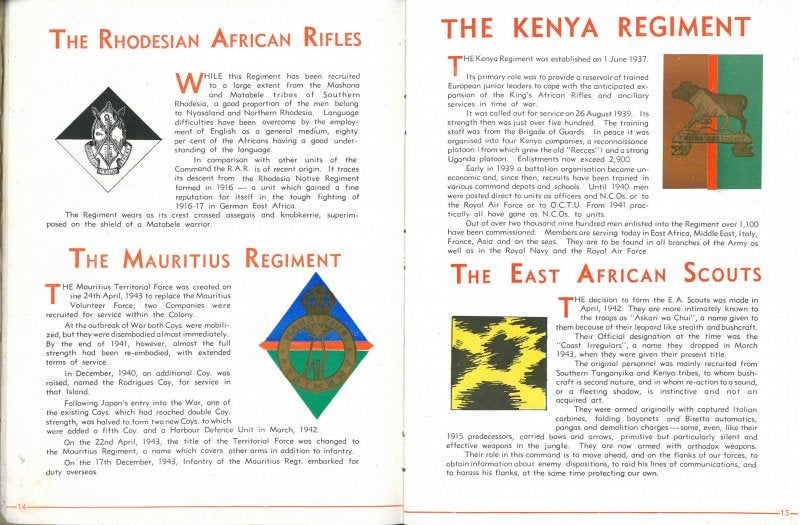 Propaganda was one recruitment tactic; another was highlighting the social status and economic opportunities that military employment could provide. But by far the most controversial and clandestine method was force. The official line was that enlistment would be voluntary. But colonial officials often pressured local chiefs to find them men, and turned a blind eye to how they filled their quotas.

The result was African men put in the firing line against their will, in battlefields far from home. Some are still alive today, their disturbing testimonies corroborated by historical research. “While conscription across Africa was generally avoided, it would be quite wrong to infer that all recruitment was voluntary,” says David Killingray, Emeritus professor of modern history at Goldsmiths University, who described the experience of individuals caught up by this system as “appalling.”

Britain would go on to pay these soldiers an end-of-war bonus according to their rank, length of service and ethnicity, meaning black troops received just a third of the pay of their white counterparts. Many faced beatings by their superiors and public floggings. Such revelations, which recently featured in a documentary for Al Jazeera English, have triggered calls for the government to make an official apology and pay compensation to the last surviving veterans.

“These are men who were prepared to make the ultimate sacrifice for our freedoms. It would seem appropriate that these freedoms now should be used to compensate them for their unjust treatment in the past,” Chi Onwurah, Labour MP for Newcastle upon Tyne Central, who has senior roles in the cross-party parliamentary groups for the Commonwealth and for Africa, told the New Statesman.

“Putting an actual price on soldiers’ service reveals the deep prejudice at the heart of the services at that time. The government should launch an inquiry and apologise.” In February, following the release of the film, three shadow secretaries of state also called on their Conservative counterparts to acknowledge the systematic discrimination of Britain’s WWII African veterans, to offer them financial compensation and to make an official apology.

One Kenyan veteran called Gershon Fundi, now 93, was not among Britain’s willing recruits; he was effectively tricked into wartime service. “We were not happy being in that war,” he said. “They were treating us as slaves. We were there not because we wanted to be there. But we were forced to go there.”

In 1943, aged just 17, Gershon says a local administrator offered him a job in “communications” but did not specify what this would entail. He took the job, eager for paid work away from impoverished drudgery, and showed up at the given address on his first day. “When I got there that’s when I realised I was in the army,” he said. By then it was too late. He was ordered to sign a contract, banned from leaving, and sent off to Ethiopia and Somaliland as a signalman.

Gershon’s hapless entry into army life came a year after the East African Governors Conference had asked for permission to use full-scale conscription; Britain’s Secretary of State for the Colonies decided to leave the matter in the hands of the individual administrations in each colonial territory, even though a League of Nations mandate prevented the conscription of “protected” peoples, which was the official designation of Africans living under British control.

The cruelty of this policy was compounded by local elders, who were ordered, with minimal oversight, to fill manpower quotas. “Traditional authorities often got rid of men who displeased them,” said Professor Timothy Parsons, a leading authority on Britain’s east African army, based at Washington University in St. Louis. Several of his interviewees “recall being conscripted as a result of disputes over land or women.”

Recruitment was also driven by racist profiling. As one officer of the King’s African Rifles (KAR) wrote in 1940: “The blacker their face, the huskier their voice, the thicker their neck, the darker their skin and the more remote parts of Africa they come from – the better soldier they made.”

Likewise, Britain produced recruitment propaganda that promoted service in the “modern” colonial forces as a means of remaking and advancing “savage tribesmen”. One official pamphlet showed a picture of a Zulu soldier in a traditional outfit captioned with the phrase, “The Raw Material”; the next page shows a picture of African soldiers dressed in British Army fatigues, with the caption, “The Finished Product.” Such prejudiced stereotypes would also help justify the decision to pay these men less and treat them differently. 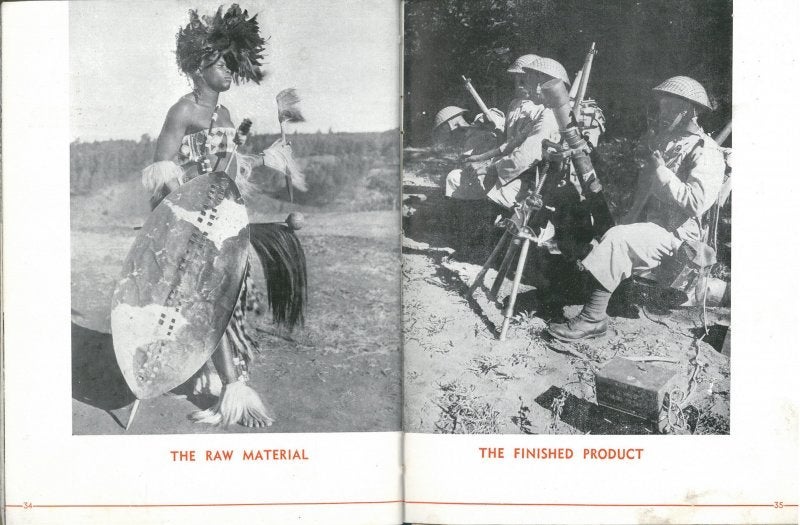 Page from The Infantry of East Africa Command official pamphlet, The Ministry of Information, 1944.

During their WWII service, Britain’s African soldiers faced corporal punishment, despite the British Army officially outlawing this decades earlier. Such abuse went beyond the occasional clip around the ear. Beatings and public floggings were commonplace.

“Our legs would be swollen—our buttocks too,” said Muchara Ntiba, a 97-year-old Kenyan combat veteran who served in Britain’s campaigns in Burma and East Africa. “We would give them the palms of our hands to be beaten, Afterwards, even an attempt to hold something would be hard.”

Corporal punishment has a long and ugly history in Britain’s African colonies, much of it uncovered by Parsons. His research shows that beatings and floggings were almost banned entirely in WWI because they had got so out of hand. The Director of Military Labour, Colonel O. F. Watkins, wrote a circular in June 1917 warning officers “that if the practice continues an example will be made.” He laid out new rules, including not to inflict corporal punishment before previous lashes had healed; never to flog non-commissioned officers before first reducing them in rank; and never to use it in “hot blood” or to “punish an act of well-intentioned stupidity”.

Corporal punishment was effectively banned in the inter-war years. This was despite objections from the government in Nyasaland (modern-day Malawi), which opposed any limitation of flogging, and from some senior personnel in Kenya where, in 1932, “twenty strokes” could still be used as summary punishment.

Reflecting the era’s views of Africans, one lieutenant colonel wrote in January 1934: “The abolition of corporal punishment in the King’s African Rifles is viewed with deep regret; this form of punishment was one which the native, a true oriental, as opposed to occidental, understood and appreciated; there is not the slightest doubt that he bore no resentment at all at receiving a whipping.”

Despite some protests, corporal punishment returned with a vengeance in WWII. The UK’s East African Force lobbied for its use as a summary disciplinary measure, despite being aware of the controversy around such harsh discipline. “We know how close a watch is being kept by certain organisations, and persons, for any evidence, or alleged evidence, that colour discrimination is still being maintained,” wrote one colonial official in September 1940.

Over the coming year, senior commanders argued about the legitimacy of using corporal punishment. Whitehall delivered the final ruling in February 1941, saying that the “power to award corporal punishment shall be confined to courts-martial,” and refusing to extend such powers to commanding officers. And yet, a circular a few months later warned that commanders were still making illegal use of summary corporal punishment.

The problem would persist for years. In 1943, an English-born missionary made a formal complaint about the public flogging of African soldiers, with threats to go to the press about such “sadism.”

The pro-beating constituency tended to be officers recruited from the white settler communities; those brought in from mainland Britain were less vested in the colour bar and discriminatory hierarchy of the colonial state. “Take cases like Kenya or Rhodesia, where the settlers could be extremely brutal and were could be a law unto themselves,” said Parsons. “There were notorious incidents in Kenya where settlers beat Africans to death and were either not punished or punished by small sentences like manslaughter.”

This abuse was not formally abolished in Kenya until December 1946. A few months before, a Colonial Office report said that the service of Africans “in this war side by side with British soldiers entitles them to be treated in this respect as British soldiers, and not alone among the colonial forces to remain subject to this punishment.” Corporal punishment, however, would still be permitted in military prisons until April 1948.

As for Ntiba, the elderly Kenyan combat veteran, his salvation from such brutal maltreatment came in the form of an officer and a medic. “A captain ordered the whipping to stop,” he said. “And a doctor said no one should hit any soldiers. People were being badly hurt.”

But for some, the end of the war simply marked the start of a new struggle. Grace Mbithe’s husband, Stanley, was finally released from the ranks, having been pressganged years earlier, but would bring the trauma of conflict into the family home. “He came back unwell,” Grace told me in her ramshackle home. “His heart beat so loudly. At night we couldn’t sleep. This happened when he remembered what he had gone through.”

As rain thundered against their corrugated metal roof, storms proved most distressing for this young veteran who never wanted to go to war. “If he heard it while we were sleeping, he would get up, he would go outside and it would rain on him over and over again, while his heart beat faster and faster,” said Grace. “He had a bad heart and that’s what killed him.”

The government refused to comment specifically on any of the allegations. A spokesperson told the New Statesman: “The UK is indebted to all those servicemen and women from Africa who volunteered to serve with Britain during the Second World War. Their bravery and sacrifice significantly contributed to the freedoms that we all enjoy today”.

Jack Losh is a freelance journalist, photographer and filmmaker. He has contributed to Granta, Newsweek, The Guardian, The Washington Post and others. He tweets @jacklosh