This morning, the director of inequality thinktank Class, Faiza Shaheen – Labour’s parliamentary candidate for Chingford & Woodford Green and a regular talking head on political shows – went on Sky News’ All Out Politics programme to discuss Brexit, Theresa May and the UK’s relationship with Saudi Arabia.

So far, so normal.

But following her appearance on the show, the presenter Adam Boulton made the extraordinarily snobbish and unprofessional move of joining in mockery on Twitter of her accent.

“Someone tell Faisa there’s a ‘t’ in the alphabet! [sic]” one tweeter told Boulton, to which he replied that pronouncing t’s is “not in the right-on Labour lexicon” and “dropping it shows you are embarrassed about being posh”. 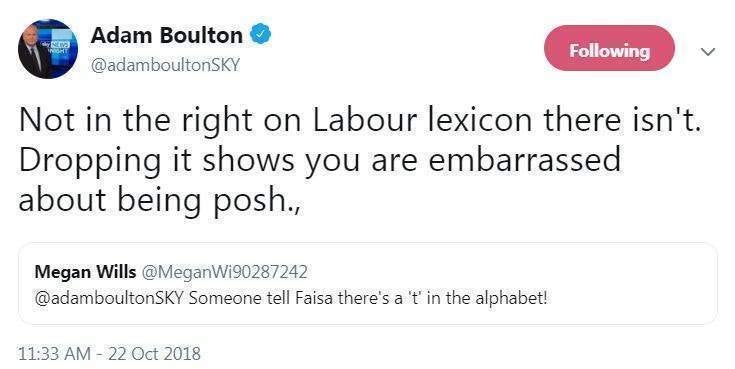 Shaheen called this message “outrageous” and “class snobbery from a prominent broadcaster”, pointing out: “I’m the daughter of a car mechanic from East London, this is how I speak.”

Mocking a contributor who gave up her morning to do him the favour of appearing on his programme, with a heavy dose of snobbery thrown in for good measure? How inviting for potential guests on Boulton’s show. His producers must be despairing…