Rouged Michelin man and breakfast troll Piers Morgan is sticking up for men’s rights again – this time in defence of fathers forced by the thumb of politically correct repression to hold their own offspring.

Commenting on a picture of the James Bond actor Daniel Craig that appeared in The Sun, carrying his one-month-old daughter around New York, Morgan leapt to defend the poor oppressed, um, proud father by tweeting that he had been “emasculated”: 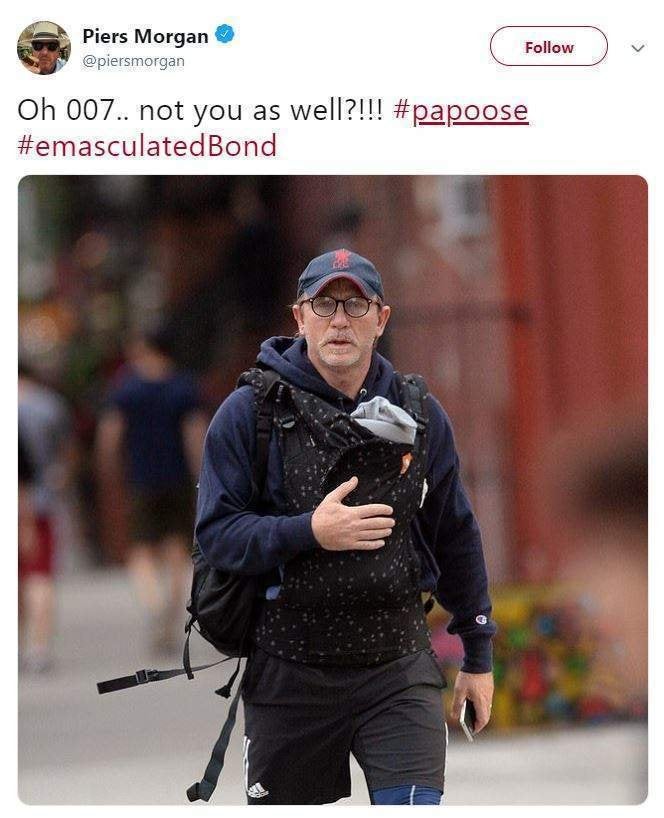 His little boy macho fantasies dashed by the idea of a fictional tuxedoed misogynist holding a baby, Morgan quickly drew ridicule on Twitter.

As men piled in with pictures of themselves holding their own young children (might wanna prioritise your kid’s privacy over your self-indulgent display of “modern masculinity”, ie. being a parent, eh guys?), Morgan defended himself with the world’s most ludicrous sentence:

“I just expressed a genuinely held opinion that papooses are emasculating, embarrassing & unnecessary – and the virtue-signalling world’s gone bonkers.”

Boasting that he’d held his own kids, Morgan concluded: “I just did it with my arms, not a papoose.”

Ooh, Piers, don’t tease. Because everyone knows arms are manly. The manliest of limbs. They can carry beers. And drive fast cars. And hold sexy ladies. Can a papoose do that? NO IT BLOODY CAN’T DANIEL. Now shoot a gun!