Troll factory and pro-Brexit campaign group Leave.EU has a line in horrific tweets, which your mole follows closely. There was that time when it tried to call out anti-Semitism… by being Islamophobic. Or its sinister tweets championing Donald Trump and Marine Le Pen, and decrying “no longer traditionally British” boys’ names in London. Or its founder, former Ukip donor Arron Banks, calling Labour’s anti-Semitism scandal a “witch hunt” on Twitter.

And here they go again, this time with a highly incendiary tweet depicting George Soros as “the face of the People’s Vote campaign” (he’s not), pulling puppet strings to control Tony Blair (who is also not). 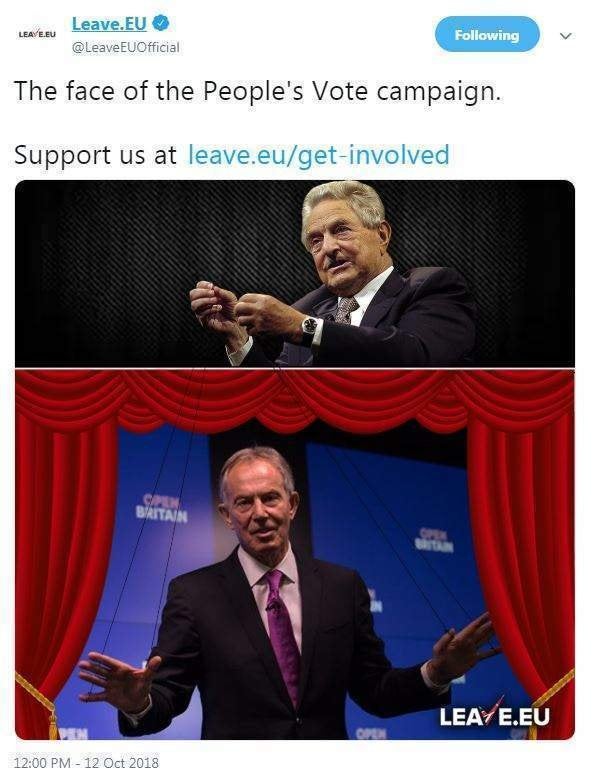 As a billionaire Hungarian-American investor and philanthropist, Soros has long been the target of racism and anti-Semitic conspiracy theories, and Leave.EU’s tweet picturing him as a puppet master suggests he’s a shady figure controlling politics behind-the-scenes – an age-old anti-Semitic trope.

This tweeter pointed out how the image echoes anti-Semitic propaganda:

Hi @LeaveEUOfficial I’m a big supporter of leave and I’m sure the imagery used in this picture wasn’t intentional – but it has been used over centuries to depict Jews, and is now being used by Remainers to paint you as anti-Semitic.
Would be wise to consider removing them. pic.twitter.com/cFUiY3LX9t


Centre-left blog the Red Roar called on Leave.EU to “delete this disgracefully antisemitic meme and apologise” – to which Leave.EU publicly replied with a flippant remark about the Labour party: “Behave! If every criticism of a Jew is now anti-Semitism then the current leadership of the Labour Party really does have a lot to answer for… X” 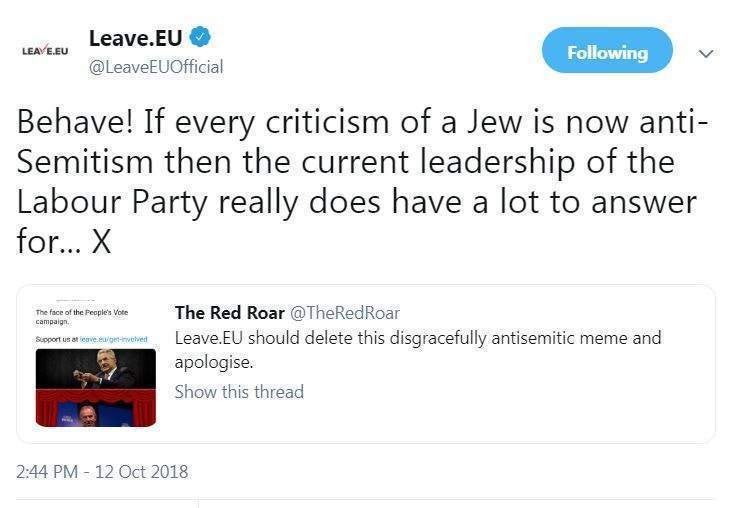