Readers of the alternative left-wing site the Skwawkbox may be struggling to keep up with a developing political story this week, after a number of its posts on one particular subject were temporarily unavailable.

The website, which is known for its fierce defence of Jeremy Corbyn against negative mainstream coverage, ran three pieces challenging the Daily Mail’s Saturday splash suggesting the Labour leader laid a wreath for terrorists in 2014.

Responding to this front page, the Skwawkbox ran a story the same day, headlined “Mail’s disgrace: front-page Gaza Corbyn attack is complete fiction”, which was unavailable online for three hours or so today, giving this error message: 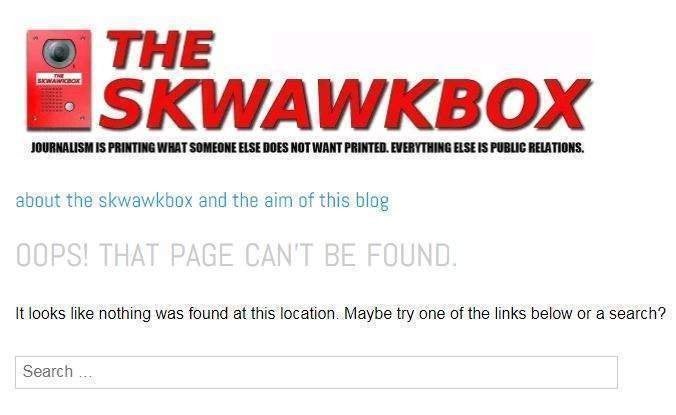 You can read a cached version here, but it’s now online again.

The thrust of its piece was that the paper’s story was false – quoting a Labour insider who said he was at a ceremony laying a wreath for Palestinian airstrike victims, rather than the terrorists – buried in the same cemetery – who were behind the deaths of Israeli Olympic athletes in the 1972 hostage massacre in Munich.

The next day, on Sunday, the site ran another piece that also disappeared today and then returned (you can read a cached version here) entitled “Excl: Mail’s ‘terrorist grave’ pics – ‘No match to Corbyn wreath images’”. This piece used a graphics expert to suggest that Corbyn in the Mail pictures was not standing at the graves of the Munich terrorists.

A third piece – run this morning, error messaging this afternoon, and now live again – headlined “Mail fake news exposed again – Corbyn wasn’t there on date wreath laid for ‘Munich terrorists’” used a date mentioned in a Tunisian embassy Facebook post (which differed from the day of the ceremony in the Mail story) to posit that the Labour leader didn’t attend the wreath-laying in question. This piece also questioned whether the Mail pictures were possible, regarding the angle of the shots and where the photographer would have been standing.

At the time of writing, the tweet of the second story (156 retweets) remains, as do the Facebook posts of all three stories (328 shares, 67 shares and 82 shares).

I contacted Skwawkbox earlier this afternoon to draw attention to the missing articles, asking why they’d disappeared. I was told they are online and indeed, they are now back up again. It didn’t seem to be a website-wide error, because while those pieces were down, I tried clicking on links to pieces unrelated to the wreath story, which all worked.

The assumption was that the pieces had been taken down because it turned out they weren’t accurate – Corbyn himself said today in an interview that he was present at the wreath-laying ceremony on the day the Mail claimed he was.

So why is this interesting?

Most are sharing the Skwawkbox’s vanishing stories to point-score against Corbyn’s champions in the media.

But that’s not why this is important – it’s important because, although the Skwawkbox’s pieces are back up again, the quiet delete-and-forget is a practice employed by other more established digital media outlets. It’s a trend that is further eroding trust in online media.

A recent example is a MailOnline report on immigration in Paris, which – among many other errors – confused the city of Saint Denis with the Seine-Saint-Denis Paris suburb. The piece is no longer available on the website, giving an error message – and the journalist who wrote it suspended his Twitter account, according to BuzzFeed News. There was no apology, correction or comment on the article’s errors.

All journalists and news organisations make mistakes. But it’s usually been the perfunctory nature of corrections and apologies in the traditional tabloid press that have been the problem. There is even a Twitter account called @SunApology, dedicated to publicising apologies, corrections and inconvenient statements from the Sun and other right-wing papers.

But while the press regulator Ipso can now compel editors to publish “due prominence” corrections in the publications it regulates (it can decide the page, font size and wording), digital news outlets appear to be making up their own rules.

The so-called alt-left stable of viral news sites in the UK have different correction policies from each other, for example.

The Canary pins corrections to the top of its Facebook page – where it picks up most of its audience – for 48 hours. Its editor has also been known to delete a piece and publicly acknowledge it, apologising in a newsletter to all readers (the site had erroneously reported that the Sun had ignored the Manchester terror attack).

Last year, I was told by the Skwawkbox’s founder Steve Walker: “When we get it wrong we make sure we say so equally prominently, as quickly as possible.”

So now its wreath reporting is back up again, it should be running corrections to its coverage in light of Corbyn’s interview today.

In the past, it has changed headlines to reflect a mistake, and run a correction along the top of the article (like with its notorious 2017 Grenfell story, which erroneously reported that the government had gagged the fire’s death toll with a D Notice).

The problem with stories like the MailOnline’s Saint Denis “investigation” disappearing without explanation, or viral posts having corrections added or headlines latterly corrected, is that they often continue to do the rounds on social media with their original framing.

An article posted on Facebook, for example, will remain looking the same (even if the headline and picture are changed later) – and will carry on being shared unless it’s deleted.

Although the modern media wrings its hands about “fake news”, the exposure to completely made-up news stories in the UK is quite low (15 per cent, according to Oxford University’s Reuters Institute for the Study of Journalism).

What matters more to readers is an age-old problem given room to thrive in the wild west of online news: stories that twist facts to push an agenda (which concern 55 per cent of UK media consumers), and simply poor journalism (which concerns 51 per cent). Across the world, the type of misinformation you’re most likely to be exposed to is not fake news or hidden advertising – it’s poor journalism, at 42 per cent.

If corrections can’t be given due prominence with social media shares – or if corrections aren’t made at all and mistakes simply disappear at source and are perpetuated online – then this proportion will rise.