The trailer has been released for a much-anticipated new film Mary, Queen of Scots about the relationship between the titular figure and her cousin, Elizabeth I. The hype around the cinematic debut of big-time London theatre director Josie Rourke has stemmed largely from the casting of Margot Robbie as Elizabeth and Saoirse Ronan in the title role.

Hold on, you might be thinking: Margot Robbie looks nothing like the pinched, ginger Tudor we know and love. She is best known for playing versions of the stereotypically “irresistible woman” (think Naomi Lapaglia in The Wolf of Wall Street and exaggerated dream-girl Charlotte in About Time). Most of the press surrounding the film has in fact focussed on he fact that the prosthetics and make-up Robbie us wearing to play the role make her completely unrecognisable.

This prompts the question: why hire one of the most traditionally beautiful women in the world (she was named Maxim Australia’s “hottest” woman in 2016 and is a Chanel model) to play a character notable for her unconventional looks? Why not hire an actor whose looks actually are unconventional, who would, in fact, also be struggling to find other work precisely because she looked that way?

The answer to this question is undoutbedly her fame. It is not that Robbie is not talented enough to play the role, but she by no means holds the monopoly on female acting talent. The question is, therefore, not “why is Margot Robbie uglying up”, but why is it that only “beautiful” actors have enough capital to sell “ugly” female leads? I will not be illustrating my point with flagrantly unflattering depictions of Harding and Elizabeth I placed side-by-side with modelling shots of Robbie: it would be unnecessary and make the wrong point. It is not that certain women are too ugly to be impersonated by anyone that doesn’t look exactly like them: it is that women who are deemed conventionally attractive by the mainstream media’s male gate-keepers are pretty much the only ones with access to big-time roles, regardless of who they are impersonating. In order to really make it as a female actor in the first place, you need to first qualify for the hot-girl roles. 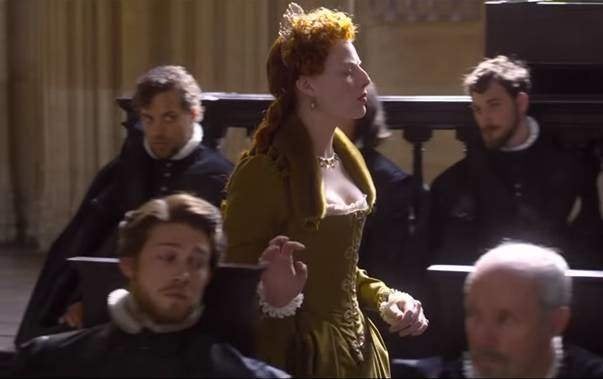 Robbie has, to her credit, used her fame to promote non-traditional ideas of womanhood throughout her burgeoning career, by no means content to sit comfortably within the hot-girl arena, and has more than once chosen to play roles that have her experimenting with alternative levels of attractiveness. In interviews Robbie repeatedly makes body-positive comments about her lack of interest in dieting for film. Where she could certainly exist playing the most insipid of blonde model roles, she insists on playing more complex female characters. Her Jane in The Legend of Tarzan (2016) enjoys the moment of spitting in the face of a man who asks her to scream like a damsel. Robbie also underwent unconventional de-glamourisation for I, Tonya (2017). Much of the draw of this, too, is a desire to see how far they managed to make her look like the real-life Tonya Harding. Indeed, her facial expression and mannerisms are remarkable, but she still looks quite stunning, just in a more wayward way. She doesn’t actually have the built, sporty figure of Harding, or the genuinely harsher features.

Making films like this, Robbie is demonstrating an awareness of a deep paradox within Holywood’s female access system. Being a classically “hot” girl begins to work against you once you gain ground: women are forced into playing less conventionally attractive leads in order to be taken seriously. The classic example of this is Charlize Theron’s Oscar-winning performance as butch serial-killer Aileen Wuornos in Monster, for which she in essence had to put on entirely different face. Would Theron have been able to win the Oscar with a film about a serial killer just as beautiful as her? Who knows. More to the point, would an actor that had looked more like the real Wuornos have won? Doutbful. Society deems it a supreme and unmatchable sacrifice for a woman to relinquish her attractiveness to men, and one which is often rewarded with critical acclaim. Male rising stars are blatantly not governed by the same entry requirements, and are not held captive by the same critical standards. While bodily transformations and relinquished sex-appeal certainly don’t hurt their chances of acclaim (think Heath Ledge as The Joker), they are perfectly able to reach the same heights without stretching themselves to this.

This issue of beauty-patrol becomes more pertinent when the hold that western, male beauty standards has over hiring and firing in Holywood leads to problems like white-washing. There is a difference between Nicole Kidman wearing a fake nose to play Virginia Woolf and Angelina Jolie being cast as someone of African, Chinese and Cuban heritage – which is what happened to the real-life Mariane Pearl in 2007 film A Mighty Heart. They didn’t even make any attempt to differentiate Jolie visually from Pearl (whose memoir about her husband’s kidnap and murder is what the film is based on) – they actually gave the actor black, crimped hair to try and imitate her. Despite the fact that Pearl herself has said she chose Jolie for the role, it seems unlikely that the film would have received as much attention as it did had it not starred Jolie.

Similarly, there was justified controversy surrounding Emma Stone’s casting as Allison Ng, a character with quarter Hawaiin and quarter Chinese heritage in the 2015 romantic comedy Aloha, which was supposed to represent the diversity of Hawaiin culture. Both of these of the perfect example of a film casting a famous actress rather than a more appropriate of less conventional one in order to score at the box office. For a film to draw crowds, it needs to contain known actors who people want to see. And, in the case of women – these are almost always people that look like Margot Robbie.

Both Robbie and Ronan look to do a stellar job as Elizabeth and Mary, two warring political goddesses. Thanks to them, the film is likely to be a box-office hit. Either way, it certainly won’t hurt that both are beautiful, ascending mega-stars. Audiences do, without question, come back to see the same faces again and again. We love what we know – or, rather, who we know. This is unlikely to change. However, we should be encouraged – or, at the very least, given the opportunity –  to fall similarly in love with women who are less white, less blonde, less traditionally attractive than we currently are, so that the unconventional roles become not just impressive feats of self-extension, but the very embodiment of the non-traditional values they champion.