The British left is not known for its ability to unite at crucial moments. Labour leader Jeremy Corbyn has been garnering resentment from former supporters and fellow left-wingers for his failure to out rightly condemn Brexit, or promise his voters a second referendum. This is despite the fact that, as he himself has acknowledged, the majority of his supporters voted to remain in the European Union.

The protests over Donald Trump’s official UK visit have, too, been drawn into intra-left controversies.

This year, Together Against Trump, the wider coalition of which Stop Trump is a part, organised a protest starting in exactly the same location as that of the Women’s March, albeit two hours later. Critics viewed this as an undermining act, insisting that the fight against Trump has always been led by women, and should continue to be so. In The New European, Caroline Criado-Perez wrote that she believed the conflicting protests would leave people confused as to which they wanted to support.

Indeed, from Women for Refugee Women, who are protesting as part of their #SetHerFree campaign, to Voices4, an international collective aiming to champion LGBT+ voices, many of the protesters seem to have come as part of smaller sub-groups and organisations.

However, people don’t seem to be letting their personal directives to protest get in the way of intersectionality, and are uninterested in talking about specific group divisions. Ari Boulting, who is marching with Voices4, explains why she is marching: “because I love my family all over the world. And I’m a Jew. When Trump said those things about rounding up Mexicans, I just thought: never again.” She is aware of the controversy surrounding the two different march coalitions. Does she have a view on the matter? “Not in particular.”

One protester says that they were forced by a friend to leave the last protest they were at because of the presence of the group Stand Up To Racism that has been linked to the Socilaist Workers’ Party, which itself is controversial due to claims that rape allegations against a senior member were not properly investigated. “But it’s hard, isn’t it,” they say: “everyone wants to stand up to racism, don’t they?”

The drag king Adam All, AKA Jen Powell, is marching as part of the Drag Protest Against Trump. Jen explains that they don’t understand “how you can look at another person who is different from you and think: that person is not a person.” This is clearly not just about LBGT people. “He’s a symptom, he’s not the cause. We need to be the antibodies” for social change.

Zara, who began her protest with a group of women of all different faiths, is reluctant to align herself with any one particular group. She repeats: “we’re all here for the same reasons.”

Of course, no one wants to say something to a reporter with a notebook that could be construed as controversial – but there is a genuine spirit of intersectionality here. Those protesting have no interest in the intricate and complex rivalries of the leading figures in Britain’s left-wing groups. Nevertheless, they are not impartial. They know exactly what they don’t like – and that’s Trump. 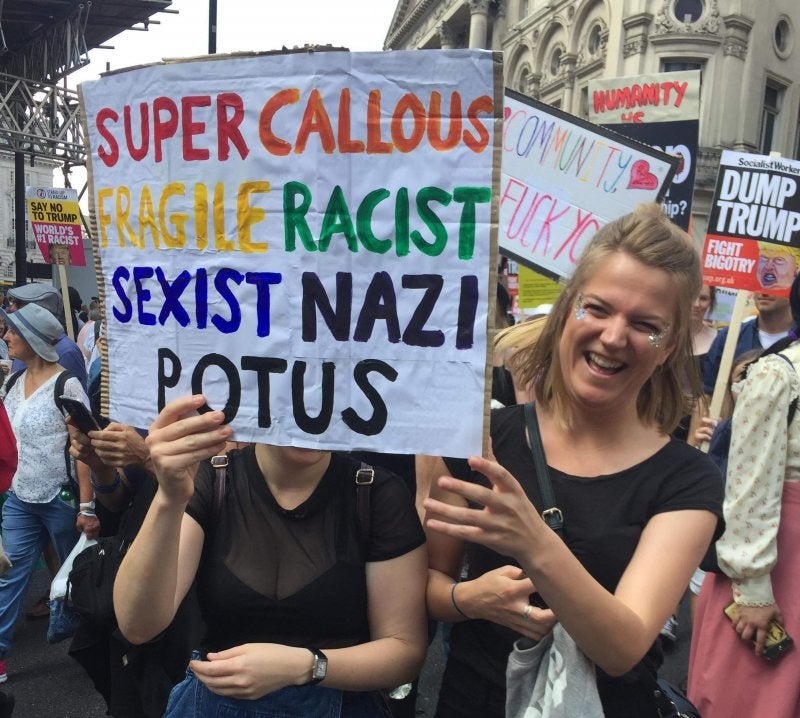