In perhaps the most damning news for Labour since the BNP’s Nick Griffin threatened to vote for it, Brexiteer supremo and Ukip bankroller Arron Banks has defended Jeremy Corbyn against accusations of anti-Semitism in his party.

The founder of Leave.EU, whose campaign has run advertisements pitting Jewish and Muslim voters against each other, has tweeted that he sees the allegations as “a witch hunt!”: 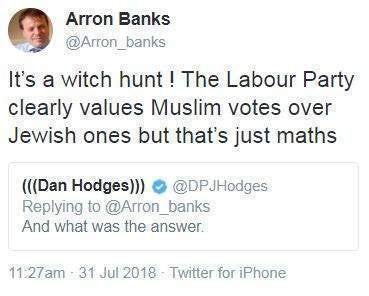 “Is this about anti Semitism or removing Corbyn? Just asking….” Banks tweeted in relation to criticism of Corbyn and his allies, following the story of a Labour official blaming anti-Semitism claims on “Trump fanatics” in his party.

The bigoted boy of Brexit went on to dismiss the problem, as “every party has a few wrong oddballs”.

Your mole isn’t sure if Corbyn will be that keen on this particular political endorsement.