I am 30 years old, wheelchair-bound and have several complex health conditions, which means I sometimes require care. When I was on Employment and Support Allowance, I was in the “Support Group”. This meant I was classed as not fit for work.

Then I changed to Universal Credit, the new benefits system the government is rolling out. When you make the transition, regardless of any previous decisions, you are required to have a new Work Capability Assessment. This is one of the most stressful things someone with an illness must go through.

After my assessment, I was classed as “Limited Capability for Work or LCW”. In April 2017, the government removed the additional premium this included, so now I just receive the basic allowance. I am still expected to look for work, despite the advice of my doctors. I am appealing the decision. More than half of cases that go to a tribunal result in the DWP decision being overturned.

In the meantime, this is my diary:

It’s been two weeks since I got my last £95.35 Universal Credit (UC) payment and ten days since I last had any money; but my next payment is finally here. This is how my life goes on a fortnightly basis since I was moved from Employment and Support Allowance to Universal Credit. 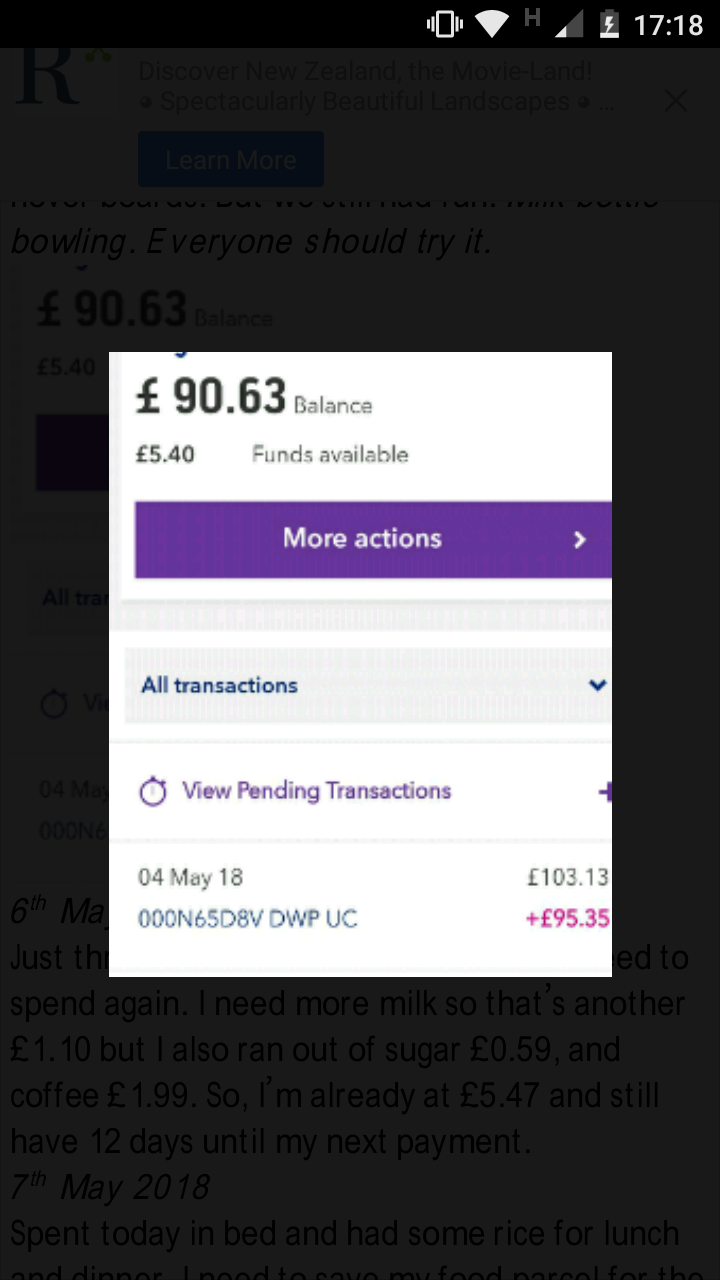 Before I write any more, I should probably explain why the amount is so low. After all, Universal Credit allowance is supposed to be £317 a month.

However when I was changed over to Universal Credit, I had to wait seven weeks for my first payment. At the same time, I also happened to be moving to a new property that suited my disability needs, and, in order to be allowed to sign the lease, the housing association required one month’s rent up front. I also had to buy myself and my sons food.

The Jobcentre advised I ask for an advance, which they happily arranged to be paid to me. I did not understand at the time that I’d be £125 a month worse off for six to 12 months. 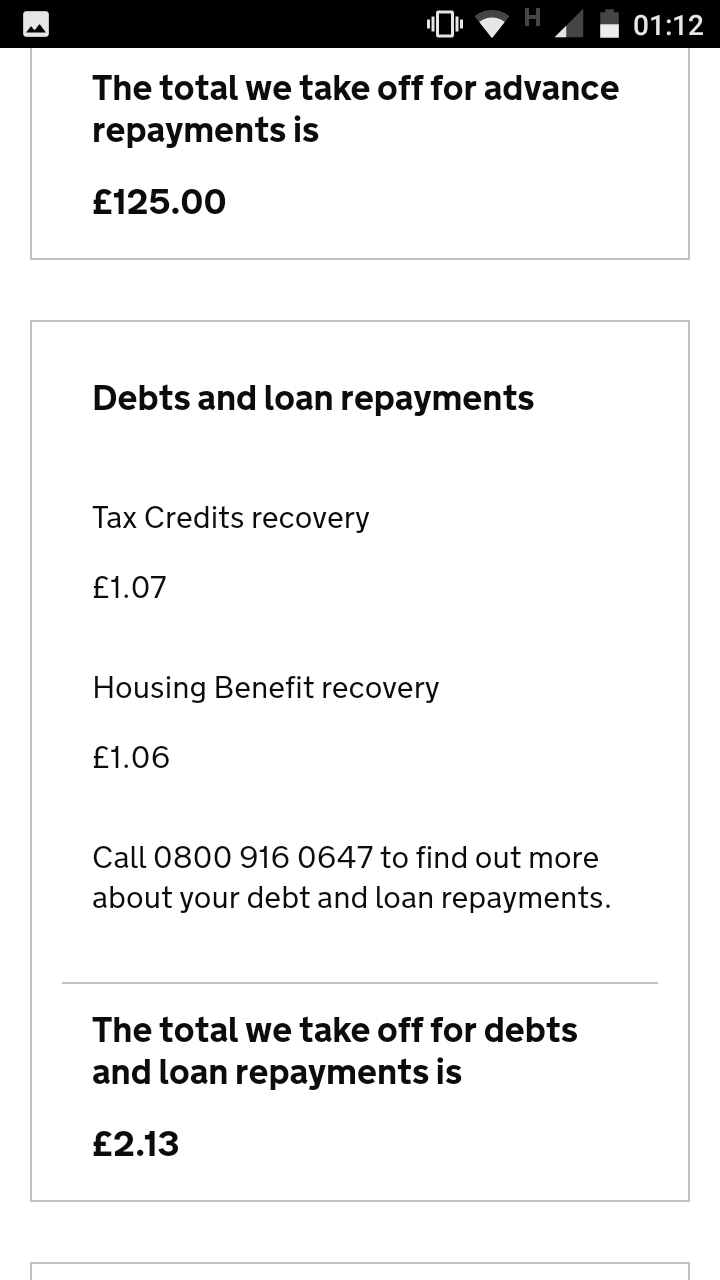 So why do I spend what I have listed? When I originally documented this on Twitter, I received fierce criticism. Apparently, I should spend my money on more important things.

That’s why I’d like to explain the reasoning behind each payment. I have two sons I look after every weekend. One, aged three, has autism and the other was born in January this year. They are the one thing that has kept me going. My three-year-old watches TV as it keeps him calm, namely the CBeebies channel.

Broadband? Well, I live in the rural Highlands of Scotland, I have no disabled accessible bus route and no library for 15 miles. Broadband is a lifeline to me. More importantly, I have to log in to my Universal Credit account daily or face being sanctioned. So having broadband is essential.

Equally linked to my rural location, are my electricity and gas costs. While it may be summer, it still gets cold here, especially at night. When I don’t have my kids, I already switch off my heating and just lie in bed to keep warm – so I can’t cut down anymore.

I had to buy the infant formula milk, as I do not get any child-related benefits, although their mother does help when she can.

After I paid all my bills, I went on my jolly way for my weekly foodbank parcel. My local foodbank is an independent one run by the church.

At one time in February, I had no food at all for two weeks. I probably ate on less than a quarter of the days in that month. I just had nothing. I lost two and a half stone.

After that, I found out about such services, swallowed my pride and asked for help. Since January this year, my weight has dropped from 79kg to 64kg, and my hair has started falling out.

Foodbanks are underappreciated and underfunded. Nine in ten of all foodbank donations come from generous members of the public. Not a penny of help comes from government, with some ministers even saying; it’s good that we have them.

I need milk for myself and my three-year-old, so I get that for £1.10 and because my son has been good I get him a Freddo chocolate bar for 25p. He still deserves to be treated now and again. In just two days, I’ve gone from £95 to £9.15, and I have nothing to show for it.

It is pretty demoralising knowing you can’t treat your kids, take them out or even buy them presents on their birthdays, but you have to stay strong for them.

Spent today in bed. Had some rice for lunch and dinner. I need to save my food parcel for the kids as I only get the size designed for a single person.

I decided I wanted to be able to make myself some sandwiches, so I brought a loaf of bread for 45p and a small block of cheese for £1.72. This left me with £3.30. I must admit that I felt bad after buying it as, I shouldn’t have wasted the money.

Today I felt depressed about my situation. Since I left the army, I have had mental health problems. I suffer from depression, and I was diagnosed with Borderline Personality Disorder last June, after I split up with my partner. I made some very stupid mistakes at that time, and worried a lot of people. But now I just have to move on and show that I am not that person, and try to be a good role model to my kids.

I have been far more depressed since coming onto Universal Credit. This also includes an attempt on my life in March as I just couldn’t cope with the situation I was in anymore.

Anyone who is similarly affected can get help by calling the Samaritans on 116 123.

My remaining cash dropped to £2.20 as I got a bit overzealous with the milk, but being trapped in a house all day does limit what you can do, especially if you can’t physically do much yourself as well.

Absolutely freezing here. I’ve had to put my heating on for 30 minutes to take the chill off, and it’s 12 degrees celsius in the house. As the heating is on, it heats the small hot water tank in the boiler. I take advantage of this and have a wash with warm water instead of cold. It feels amazing. Seven days until my next payment. Still £2.20 left, plus a few slices of bread and a box of cheesy pasta. Oh, and about 100g of rice.

And it’s happened: the final £2.20 has been spent on UHT milk and bread. With six days to go, I now have nothing. To add insult to injury, it’s actually nine days to my next payment, because of the May Day bank holiday; I was paid early last time around.

I wrote in my journal in my Universal Credit account, literally begging them to reduce the amount at which I’m paying back my advance. £125 out of £317 is just too much. I can’t keep this up.

Totally depressed, stayed in bed, my health issues are flaring up again, partly caused by stress. I have lost any incentive to get out of bed. I feel awful, mentally and physically. Would see the doctor but I can’t get there. It’s seven miles away.

The days I spend in bed, I don’t eat anything. I am so low I just don’t feel like doing anything at all. Plus I couldn’t eat much anyway. It is a struggle to get a three-day food parcel to last a fortnight, even by rationing it.

Received a reply from my work coach. They refused to lower my repayment amount. They don’t address my pleas at all. Instead, they offer me “budgeting advice” and arrange an appointment in two days’ time, to attend the Jobcentre to “teach me how to manage my money better”. I advise that the Citizens Advice Bureau have already done this and, regardless, I literally cannot get to the Jobcentre, both because of my health and the fact there is no bus.

They cancel the appointment and offer no other advice. Apparently I’ve had all the support available. I’m warned though that I will be sanctioned if I don’t attend in future.

There it is. A fortnight in my life as a Universal Credit claimant. No extravagance, no fun, fancy tech, nothing. All I know is destitution and pain. UC has made my life a living hell.

This cannot go on.

The government needs to act to alleviate the crisis the system is in before rolling it out any further.

Foodbank referrals are up 52 per cent in “full service” areas according to the foodbank charity Trussell Trust’s figures. Seven in ten of new claimants are entering debt as a direct result of the five week waiting period.

The government has failed to act, despite repeated warnings from Department for Work and Pensions staff, a vote by the House of Commons last year in favour of halting the Universal Credit roll out, and countless constituents contacting their elected representatives for help. Ignoring this is, in my humble opinion, either bordering on gross negligence or just plain wilful neglect.

There have been deaths. Perhaps they were not caused by Universal Credit directly, but because of malnutrition, due to a poor diet, or hypothermia, due to lack of heating. Not to mention people whom have taken their own lives.

It seems that it’s more important to steamroll this system in than stop it. Why? Because that would look like a failure. Yet I recently saw a quote that could not be more accurate. As the US novelist E.A. Bucchianeri wrote: “Errors do not cease to be errors simply because they’re ratified into law.”