Conservatives are taking heart from a new study that shows young people think taxes and public spending are too high.

According to a piece in today’s Times about the report by the organisation’s director Robert Colvile, the results show that you can’t assume young people automatically have left-wing values.

This is despite its polling finding almost half of young to middle-aged voters (18-49) say they definitely won’t vote Conservative at the next general election – and so many younger people voting Labour last year (63 per cent of 25-29-year-olds, 55 per cent of 30-39-year-olds and 44 per cent, still the majority, of 40-49-year-olds).

BUT younger you are, more likely you are to think govt taxes and spends too much vs too little, or at least to be undecided pic.twitter.com/7RFfSY90Bo

They also – like everyone else – think public services should be provided by the state, rather than whoever can provide them most effectively (not that big a majority, though much higher when you ask specifically re NHS) pic.twitter.com/vsRdOlCBoe

And young people, like others, mostly think that if you go to university, you should pay for the privilege pic.twitter.com/ZcE1ajgCPJ

From its report, the CPS concludes that “young people aren’t an alien species”, and simply want what everyone else wants: “more money, better jobs, a home of their own, and public services they can rely on”. They are “not clamouring for a Corbyn government”.

This challenges the idea – mainly propagated among right-wingers since the 2017 general election result – that young people are simply ideologically socialist.

It tells us young people (or people up to the age of 47, which is now the tipping point at which a voter is more likely to have voted Conservative than Labour) are opposing the Conservatives because of pragmatism – neither their policies nor the status quo since 2010 have been working for them – rather than an ideological zeal.

This is something the Tories should’ve thought about a long time ago, rather than trying to turn voters against Labour with “red scare” tactics. Young people aren’t voting Labour because they are becoming Communists, however easy an excuse that is for Tories to conjure.

Research by Ipsos MORI for the Resolution Foundation’s Intergenerational Commission has found that people born in the Eighties onwards are “more individualistic” in their outlook and “less likely to think the government has the solutions”, and are “less collectivist” and “not tribal” in terms of party politics, according to Ipsos MORI chief executive Ben Page.

Millennials’ party loyalty is “not baked in” as with previous generations, and they are “not instinctively people who search for state solutions”, he says, but that’s “not because they’re all neocons” – more that they’ve grown up in a different financial context to their ancestors. 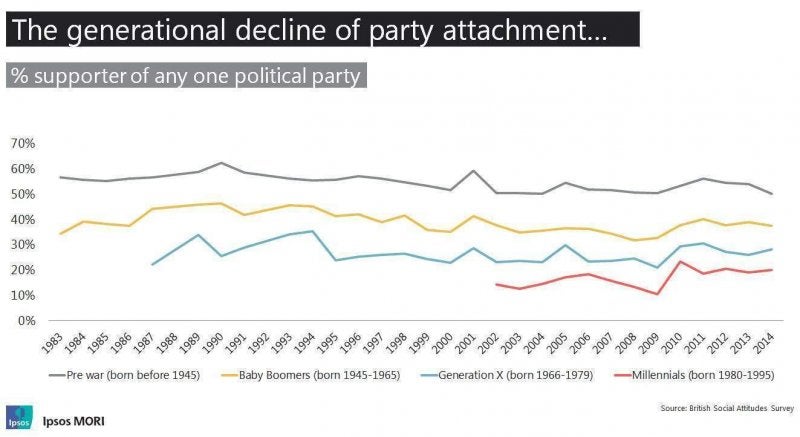 “The sense of individual responsibility is stronger” among millennials than generation Xers or baby boomers, says Bobby Duffy, the managing director of the Ipsos Social Research Institute. “The completely wrong interpretation of that is that they’re selfish – they’re just as likely to be involved in social action as previous generations. It’s almost identical.”

So the Tories will be pleased to know this generation won’t be sticking with Labour for good. But interpreting the report’s findings – particularly about taxing and spending – as suggesting right-wing leanings is wrong. And for the same reason they’re not all committed Communists. This is about feeling the system is broken, or working against your interests, rather than ideological enthusiasm for a smaller state.

“There’s a slightly generous interpretation of the figures,” warns Duffy. “The conclusion that younger people are more likely to think the government taxes and spends too much – there’s actually zero difference, really, between young and old on that question. It’s not very marked at all. They’re certainly reaching a bit using that data to say that.”

But he says the research “reflects an underlying truth” that “big state solutions” are not seen as best by this generation of young people.

“It’s not anti-big government, it’s more: is this relevant or effective for us?” he says. “Big institutions, whether that’s private or public sector, are not necessarily seen as that effective. It’s much more nimble rather than having big structures you’re tied to – which reflects that life is much more fluid nowadays.”

The same report discovers that young people are more enthusiastic about the idea of the state intervening in people’s lives:

And they’re much more likely to think the government should intervene more in society rather than less pic.twitter.com/OzhhPQFYn0

As they are often at the sharp end of failing public services (a decline in early years provision, closing libraries, stretched mental health funding, housing benefit cuts, underfunded schools, a cap on welfare, universal credit glitches, vanishing youth services, stagnant social housing supply, etc), young people can see that the current model of paying in and getting out is rather slipping up on the latter side of the bargain. This is probably where any cynicism about public spending comes from.

The idea that younger people are more open to liberal economics also doesn’t help the Tories with their biggest problem: it’s not just young people who won’t vote for them. As this very report finds, nearly half of under-50s say there’s zero chance they’d vote Tory next time.

While this report does a great service for Tories deluded enough to see their electoral chances threatened by mini-Marxists, they can’t take much heart from the alternative interpretation either.