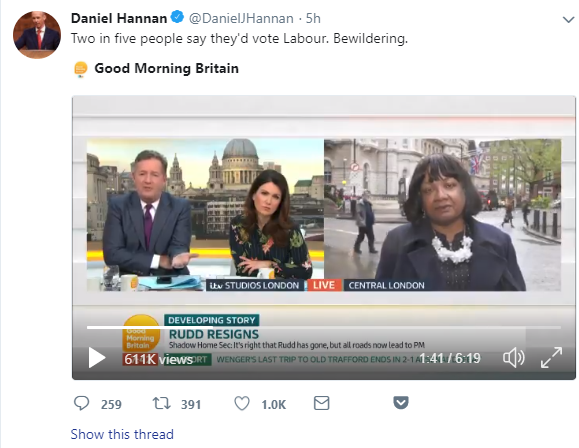 What really amazes me is that Daniel Hannan found a video about a Tory scandal, in which a caption constantly reminds viewers of the resignation of a senior Tory minister and occasionally suggests that the real source of the problem is the Tory Prime Minister, and which – this is the real kicker – features the face of Piers bloody Morgan, and the question he wants the answer to is, “Why would anyone vote Labour?”

I have no particular affection for Diane Abbott. It would be interesting to discuss why her errors and flaws as a politician are raked over and held against her to so much greater an extent than those of, say, Chris Grayling, except that the reasons are so completely bloody obvious that actually no, it wouldn’t. But anyway, I’m not going to comment on the contents of that interview.

What I thought I would do instead, since I am seemingly back on my bullshit, is to helpfully list for Daniel some of the reasons why two-fifths of the electorate might be voting Labour.

1. Because the British economy just had its worst decade since the Napoleonic Wars, and the Tories were in government for most of it.

2. Because wages have effectively not risen since 2008.

3. Because personal debt, by contrast, is absolutely storming ahead, and stands at around £15,000 per household.

4. Because experts think the squeeze on wages still has several more years yet to run.

5. Because “Yes it hurt, yes it worked” only works as a campaign slogan when it actually did work, and “Yes it hurts, squeal, piggy, squeal” is not particularly likely to persuade anybody.

6. Because the thing that’s historically been most likely to nudge young adults towards voting Tory is the acquisition of capital, and the government’s failure to tackle the housing affordability crisis has made capital much, much harder to acquire.

7. Because a third of millennials will never own their own home, and increasingly they’re aware of this.

8. Because, after eight years of Tory government, housing affordability is actually getting worse.

9. Because the main determinant of whether you can get on the housing ladder is not how hard you work or how clever you are or how abstemious you are willing to be, but how rich and generous your parents are.

10. Because handing money you worked your arse off for to a private landlord every month – even though they’ve still not lifted a finger to fix that literal hole in the literal roof you keep complaining about – makes you less likely to identify with capitalists and more likely to want to man the barricades.

11. Because the entire bargain of modern capitalism was meant to be that if you work hard you can have nice things, and that’s stopped working, so it should be entirely unsurprisingly to anyone with two or three brain cells to rub together that young people are becoming open to other ideas once again.

12. Because the government decided that the best way of tackling these problems was to charge the younger generation the better part of £40,000 to get a degree, even though its ministers mostly got theirs for free.

13. Because instead of doing anything to make the lives of the young and impoverished even a little bit easier, all the right has to offer at this point is culture war bullshit like proposing museums of communist atrocities or developing a massively creepy obsession with what’s going on in student politics.

14. Because the Home Office has been deporting British citizens simply for having the audacity to have dark skin and no paperwork.

15. Because the blame for this screw up lies with the Prime Minister’s pet policy, but she’s too much of a coward to take even the slightest responsibility for it.

16. Because four senior ministers have resigned in disgrace over the last six months, which does not do much to create an air of competent government.

17. Because at least three other senior ministers have committed offences that would in normal times have been considered resignation matters – yet are entirely refusing to go, thus showing quite how much contempt the modern Conservative party actually has for the electorate.

18. Because Theresa May seems to have decided that the lesson of Brexit was that you can and should tell a whole 48 per cent of the electorate to piss off, so it’s a bit rum after that to act all surprised that large numbers of them don’t actually want to vote for you.

19. Because she gave that speech about “citizens of nowhere” which would have been perfectly calculated to tell ethnic minority voters that the Tories didn’t want their votes, except she didn’t actually mean to do that, it’s just that her advisers were incompetent.

20. Because there have been a suspiciously high number of Tory candidates who’ve been forced to stand down because of racism, sexism, Islamophobia or homophobia, and nobody seems particularly bothered by it.

21. Because rough sleeping, which this country all but eliminated in the late 1990s, is suddenly very, very visible again.

23. Because schools are struggling to make ends meet, just like many of the families whose kids attend them.

24. Because this country is facing the biggest foreign policy challenge it has in decades – and it’s becoming remarkably clear that the government hasn’t got for the foggiest idea what to do about it beyond blaming it on the significant minority of us who always thought it was a fucking stupid idea in the first place.

Could a Labour government fix these problems? Will a Labour victory in the local elections make a blind bit of difference to anything?

Haven’t the foggiest. Very possibly not. Being able to identify problems is not the same as being able to offer workable solutions: if it were, then Brexit would be going swimmingly. And there are plenty of reasons not to vote Labour, too: polls suggest that, despite the list of ways in which Theresa May and pals have repeatedly mucked everything up, the Labour party is still struggling to pull ahead.

But it is entirely un-bewildering that, at this point in history, a large proportion of the electorate would be determined to vote against this creaking shithouse of a government in the most obvious and painful way they can. The only bewildering thing is that many Tories just don’t get it. Perhaps a museum of communist atrocities will sort everything out, eh?