Millennials are usually the first to jump on a person for their use of racial slurs, or for perpetuating a racial stereotype. They wear their “wokeness” as a badge of honour – meaning that they are aware of social justice, ready to call out racism, but more importantly, personally in tune to the inequality experienced by minority groups, especially if they themselves are not from one.

Wokeness has become a defining feature of the generation and is a carefully curated part of one’s identity. So much so that advertisers have realised and adapted accordingly. Take British fashion brand Jigsaw, which in 2017 celebrated immigration in its new ad campaign. This featured a manifesto, which began “British Style is not 100 per cent British. In fact, there’s no such thing as 100 per cent British.” (Sometimes being commercially woke fails, though, as Pepsi discovered when it tried to appropriate the Black Lives Matter movement.)

But there is one glaringly obvious omission to this heightened awareness: the Jews and their experience of anti-Semitism.

Much has been made of the appeal of Jeremy Corbyn’s Labour party to millennials, whether it is Corbyn being mobbed at festivals like Glastonbury, or chants of “oh Jeremy Corbyn” in university towns and cities. Voters up to the age of 47 were more likely to choose Labour than the Conservatives in the 2017 election.

Yet the party of millennials has struggled to diassociate itself from anti-Semitism, from the leadership down. Take Jeremy Corbyn’s defence of a textbook anti-Semitic mural. Or Joshua Garfield, the young Jewish Labour candidate who stepped down from the party’s grassroots campaign group Momentum, saying “deep-seated” anti-Semitism had left him feeling “unsafe”.

I am a millennial, and I was not even a year old before I was taken on my first demonstration. Some of the first nursery rhymes I ever learnt were the chants of anti-racism. I remember the demonstrations where speakers against racism would appear alongside poets, musicians, and writers of the time.

But while the demonstration organised by the Jewish community to say #EnoughisEnough against anti-Semitism was impressive, it was unlike the anti-racist demonstrations I grew up on. The anti-racism movements of the left were not there in support and the young people there were mostly Jewish. The speakers were community leaders, and MPs.

Sometimes it’s worse than a lack of support. Lisa Nandy, the Labour MP for Wigan, recently shared a snap shot of the abuse she got for speaking out about anti-Semitism in the House of Commons. “Nobody should be denying this is a problem,” she tweeted alongside evidence of Corbyn supporters making light of it.

The distinct millennial silence on anti-Semitism is all the more apparent when it comes to pop culture.

The brand of anti-racism and inequality I grew up with was one where arts and culture were inextricably linked. And that can still be said of today. With movements such as #Grime4Corbyn, and artists such as Stormzy dedicating his Brits performance to calling out the government’s failings over Grenfell, today more than ever we are seeing a move back to times when music said something political.

When it comes to standing up to hatred against Jews, though, not only is there a disconnect, there appears to be an active dismissal.

Take one stick-it-to-the-man pop sensation: Lily Allen. With hundreds and thousands of millennial fans, she has lent her voice to supporting refugees, criticising austerity, Islamophobia and promoting feminism.

But in the same week that Parliament debated the problem of anti-Semitism and Jewish MPs such as Luciana Berger and Ruth Smeeth talked about the abuse they received, Allen decided to take aim at Sajid Javid, Secretary of State for Communities and Local Government.

When he expressed his solidarity to the Jewish MPs who have experienced racism, her response was to tell him to build more houses. 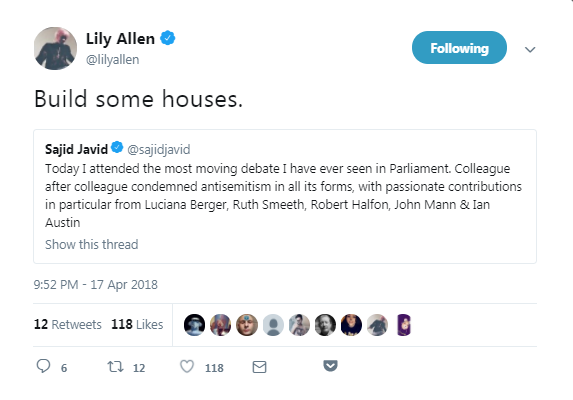 Why? Is it because criticising a Tory MP is cooler and that fighting anti-Semitism does not have the cultural capital with her fan base that housing does? Speak about anti-Semitism publicly and you are deemed most simply, as a Tory, or worse, a Labour moderate.

Then there is Reggie Yates, a BBC presenter who was dropped from hosting the Christmas edition of Top of the Pops after making an anti-Semitic comment.

Another millennial figurehead, Yates repeated an anti-Semitic stereotype when he said he welcomed the fact that grime music stars were no longer being handled by “fat Jewish managers”. Not only was his comment racist, it wasn’t actually true. Most grime stars do not and have never had Jewish managers.

Yates did apologise, acknowledging that his comments “hurt many people”. Yet is this explanation enough for his impressionable fans? Can this alone educate them about why what he said was so deeply offensive?

I know first-hand, that the answer to that question is no.

When I privately challenged an apparent anti-racist campaigner’s support of Yates’s comments, in the hope that I could perhaps educate them about tropes about Jews and money, the individual asked me what Jews had done to challenge racism against the black community.

Perhaps millennials’ lack of understanding about contemporary anti-Semitism can be traced back to their year 10 and 11 history lessons.

While much is taught about the Holocaust and the physical atrocities carried out by the Nazis, understanding the historical tropes and how they have found their way into every day modern life is not easily taught in the time allocated in the history syllabus.

Admittedly, even as someone who is Jewish, It took me time outside my formal education to become adept at challenging such tropes when they appeared.

I have had the enormous privilege of hearing first hand from Holocaust survivors, and visiting concentration camps with organisations like the Holocaust Educational Trust. If every young person had the chance to go on one of their trips perhaps we would have less of a problem.

Maybe it is because the Jewish community on a whole is largely seen by millennials as a comfortable, white, middle-class one and therefore its members could not possibly be the victims of racism.

They would of course be wrong to assume that and perhaps even more shocked to discover that many Jews live in poverty and some are not even white.

What my generation would do well to remember is that to be a true anti-racist, it doesn’t just have to go with your clothes, or fit in with the brand of wokeness that you’re trying to curate.

Your Free Palestine t-shirt and your Love Music Hate Racism poster alongside a picture of Nelson Mandela, means nothing if you are silent against the hatred of Jews.

Rosa Doherty is social affairs correspondent for the Jewish Chronicle.