Around 6am on 10 June 2017, our search and rescue ship, the Seefuchs, was idling 18 miles off the coast of Libya when Ingo, the engineer, spotted two boats. The first was the one we had been looking for: a blue wooden boat carrying 80 asylum seekers from sub-Saharan Africa. The second was a smaller plastic boat containing three Libyans. I was to learn that a Libyan boat follows behind almost every boat carrying asylum seekers. These Libyans were not here to help.

Just as Elon Musk’s SpaceX recycles its used rockets, the smugglers have found a way to reclaim the engines they have just sold to the asylum seekers. Sometimes they would steal the outboard engine before we arrived, leaving the occupants of the boat adrift. Sometimes they would wait until we’d transferred the asylum seekers to a larger boat, so they could then also steal the empty boat. These people are known as the “engine fishers” of the Libyan Sea.

That morning, they were yet to steal the engine. But nor did they want to wait for us to finish the rescue. Just as were were approaching, the engine fishers drove alongside the stern of the asylum seekers’ boat, causing the occupants to begin to shout and push them back. This commotion is dangerous: the boats that carry people to Europe are unsteady. Even a small redistribution of weight can pitch the occupants into the sea. To make matters worse, we hadn’t yet handed out lifejackets. A few people had bought their own in Libya, but such lifejackets are generally worthless: they don’t float, they soak up water and weigh their owners down. We needed to stop the commotion before it got worse.

Ingo blew the Seefuchs’ horn to scare off the engine fishers and started swearing at them in German, punching the air as he yelled. Leo, Konrad, and I drove towards them in our small rescue craft. In order to avert a disaster, I called out to the engine fishers: “Stop. Move away. Wait until we finish.” My English had little effect. With my hands, I gestured at them to back up. They understood and reversed, giving us a thumbs up. In return, I gave one as well. The engine fishers would no doubt steal the engine (and the boat) later, but we had averted the immediate danger for the asylum seekers. In the process, though, we risked a political problem for ourselves. 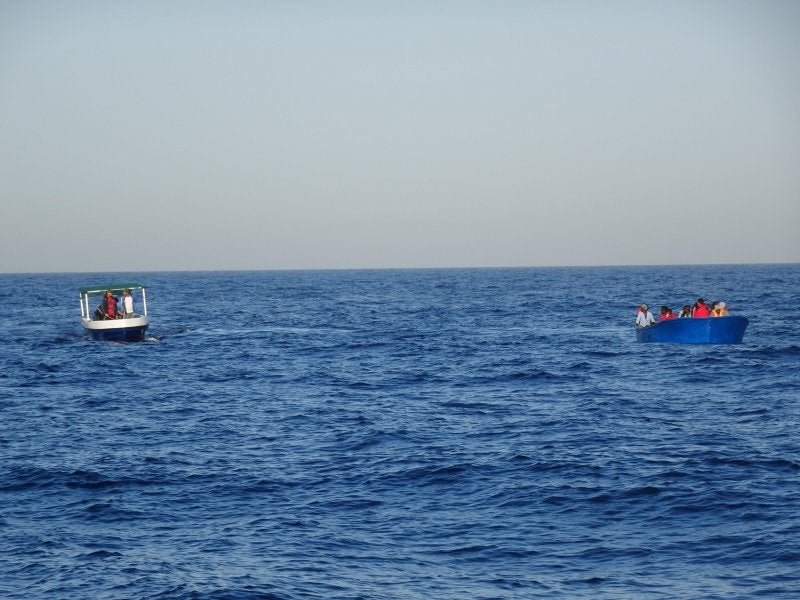 The asylum seekers and the engine fishers following behind. Image: Harald Jahn

The Italian government is increasingly critical of non-governmental search and rescue operations in the Mediterranean. Just days ago, Sicilian authorities seized the NGO boat Open Arms and accused crewmembers of promoting illegal immigration and associating with criminals. Such rhetoric has steadily increased.

Non-governmental organisations first became active in 2015 after Italy’s own rescue operation, Mare Nostrum, came to an end. Since then, they have become a convenient scapegoat for the migrant crisis. In the last year, populist and far-right leaders have become more aggressive, even claiming that NGO boats collaborate with the human traffickers in Libya.

When I returned to the Seefuchs two months later, in August, this political change had become clear. The far-right pan-European Identitarian Movement had leased a ship called the C-Star and brought her to Libya. It wanted to draw public attention to what it saw as the NGOs’ regrettable role in abetting migration to Europe, and to expose the links it believed existed between NGOs and people smugglers. The C-Star, which our German crew renamed the Eva Braun, went adrift – not because of engine fishers, but because of a malfunctioning engine. The Maritime Rescue Coordination Centre in Rome asked our NGO to assist it, but the Eva Braun declined the help.

The C-Star was not alone in distrusting NGOs. A week before the C-Star broke down, the leader of the Italian Northern League, tweeted (my translation): “Impound the NGO ships that called out to, helped, and protected the smugglers? No, don’t impound them: SINK THEM.” The leader of the Five Star Movement has similarly implied that NGOs like ours collude with smugglers. Three weeks ago, these two parties swept the Italian elections.

To me, this suggested collusion with smugglers seems unlikely. For starters, in the Seefuchs’ 12-person volunteer crew, I was the only non-German. The captain didn’t speak English. Only three crewmembers, myself included, had worked on a rescue boat before. The crew came from all walks of life: one was a retired optician, another a retired truck driver, a third works behind the counter at a post office in Bavaria. How could they communicate, let alone collude, with smugglers in North Africa?

But I also thought back to that June morning, and imagined what might have happened had someone started filming when the engine fishers and our boat were metres apart? The footage would show me talking, the engine fishers smiling, us both giving a thumbs up. Similar images led to an NGO boat called Iuventa being accused of collusion. It’s been impounded now in Italy for months (the NGO in question said at the time it was following the orders of the Italian authorities and had not received information about the investigation).

I hadn’t expected rescue work to include dealing with engine fishers and the C-Star. But I bet the C-Star and engine fishers weren’t expecting the Seefuchs either. We’re a peculiar rescue ship. Made in 1958, the Seefuchs is a fishing boat from the former German Democratic Republic, and she spent most of her life in the North Sea. Only last year, a German NGO, Sea Eye, repurposed her and sent her 133 tonnes of steel, painted red, south.

The crew is similarly incongruous. Since most of search and rescue work falls firmly in the “search” category, we had time to get to know each other. For many onboard, the Seefuchs offered an escape. Martin, the second engineer, worked for decades at General Motors in Detroit. Now aged 59, he’s living with his parents in Germany, looking for a job. He hoped the Seefuchs would help his CV. He was quiet and never spoke badly of anyone (it has to also be said he didn’t know ship engines very well). Leo is a self-employed artist living out of his van in Leipzig, who decided to go to sea after his marriage fell apart. I, too, was looking for something unfamiliar to do after my mother died from cancer a few months before.

Our primary engineer, Ingo, was short and heavy-set. He wore the same brown t-shirt and black trousers for two weeks, even to bed. For him the Seefuchs was more than an escape. He had spent most of his life in the North Sea as a fisherman on the Seefuchs’ sister-ship. “Fishing was my dream job but it went kaput because of the EU. When one of these ships got into rescue work, I followed the ship,” he would say with a shrug. Rescue work isn’t new to fishermen. Ingo described how one of his crew of four once fell overboard in the North Sea. It was dark and the water was cold; in a few minutes the man sank in front of them. 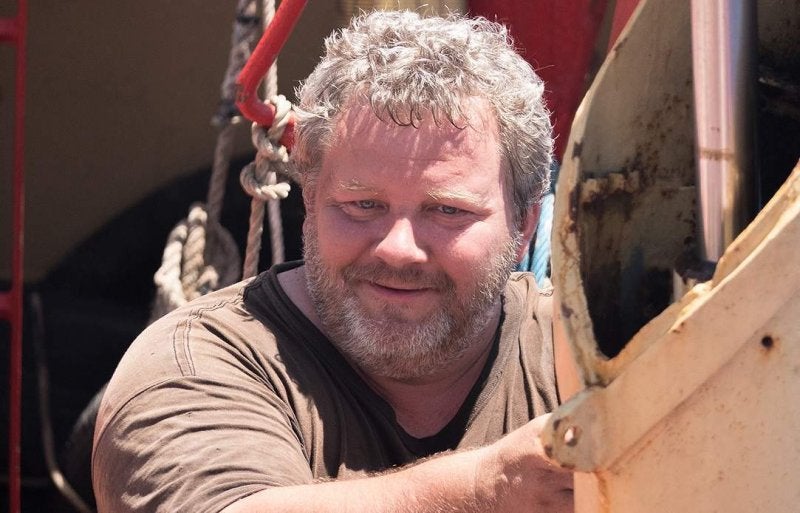 As Ingo understands better than most, rescue work isn’t political. It’s true that a few of the crew repeated the mantra of “no borders” and “solidarity” against “Fortress Europe”. But even if you did have a political stance, you couldn’t act on it. The Maritime Rescue Coordination Centre in Rome tells crews like the one I was on what to do. It is run by the Italian Ministry of Infrastructure and Transport and coordinates all rescue activities. Our work on Seefuchs was practical: to stop people dying at sea. And when over three thousand people drowned crossing the Mediterranean last year, what’s morally more straightforward than that?

And yet I worry. Our boat sat 20 miles off the Libyan coast. Did our presence encourage people to make the dangerous journey in the first place? Did the rescued need rescuing partly because of us? Our oddball crew was surely not the cause of the Eritreans leaving their homes. But we might have contributed to their decision to travel to Europe by sea.

So what can be done differently? If we ban NGOs like ours, it’s likely that fewer asylum seekers would leave for Europe by boat. But some still would, and many of them would drown without anyone there to help or even notice – as was the case in the first half of 2015. Two other extremes are appealing at first sight. Either clamp down on Libya’s ports, ensuring that no boat leaves for Europe (at which point it doesn’t matter whether or not rescue boats are there). Or fund a large-scale EU rescue operation, rather than relying on a motley collection of NGOs. Both solutions should put an end to mass deaths at sea. But for now, it’s a dream to think we can control the Libyan coastline and halt the Libyan smugglers. And equally, it’s a dream to think the EU will fund this rescue work. And so amateur NGO rescue boats continue to play their role.

It’s impossible to quanitify whether the immediate aid we bring outweighs any pull-factor we generate. But my hunch is we help more than we hurt. Even if I’m wrong about that, maybe it’s OK if emergency rescue services stay short-sighted and leave the long-term, structural solutions to someone else. Maybe it’s our job to stay unreflective. Next time I fall into the water, I don’t want anyone pensive nearby.

Peter Martin has worked as a volunteer on three search and rescue missions with NGOs, working most recently as the driver of a rescue craft launched from a larger ship. He is a PhD student in Classics at the University of Cambridge.