Trigger warning for angry elderly rightwingers: you don’t come off well in this story.

In its quest to make all young people look like over-sensitive mulches of victimhood, The Sun has run a story about how “snowflakes” (a human person with opinions who happens to be under 40 and mildly left-of-centre) are sympathising with Frankenstein’s monster.

“FLAKENSTEINS” screams the headline, in a sad day for the noble ranks of British sub-editors. “Snowflake students claim Frankenstein’s monster was ‘misunderstood’ – and is in fact a VICTIM”. 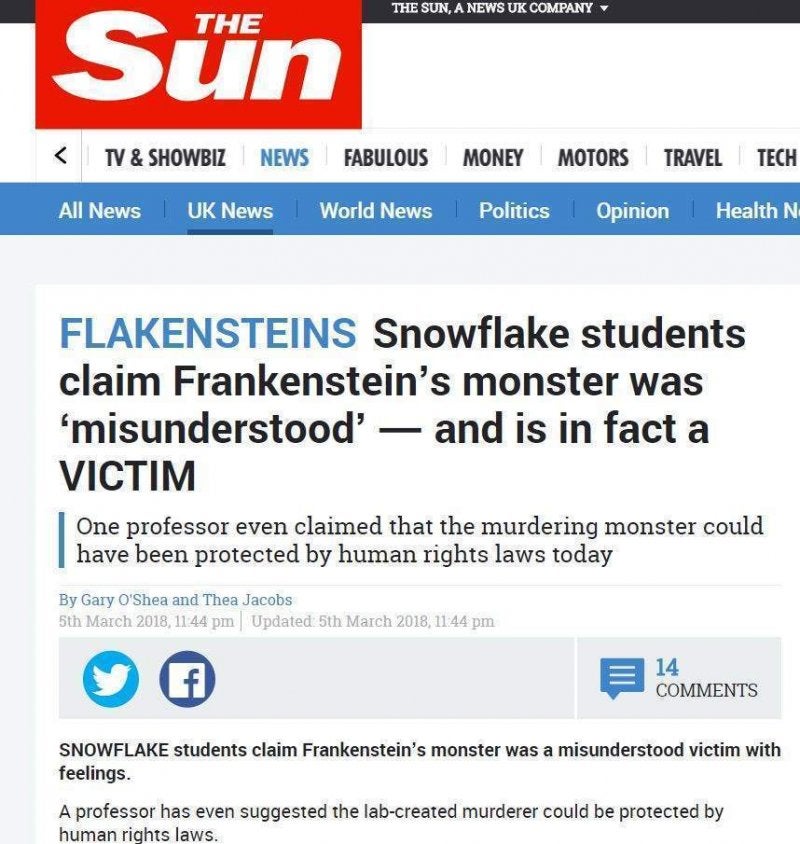 Is support for Scottish independence resurging?

It quotes a couple of academics who cite sympathy for the monster in Mary Shelley’s classic 1818 novel, rather embarrassingly ignoring that neither of them finds this a bad interpretation of the story – and the glaring fact that one of the main points of the novel is for us to sympathise with the murderous monster. (Of course, Shelley was 19 when she wrote it so she was probably a whining, no-platforming snowflake too, to be fair.)

“It’s a familiar story isn’t it, someone with a terrible upbringing going on to commit terrible crimes. The monster does deserve sympathy,” said Bristol University’s Mary Shelley expert Professor David Punter, quoted in – yes – The Sun.

In its obsessive “snowflake” bashing, it looks like the tabloid is trying to create a monster of its own. Perhaps it should consult Sparknotes next time.