First, some background. Neil Hamilton was first elected a Tory MP for Tatton, in Cheshire, in 1983, at the tender age of 34. A mere nine years later, he became a junior minister.

Then things all went a bit wrong, and in October 1994 he resigned in disgrace over the cash for questions affair. Hamilton and his wife Christine spent much of the next two decades doing a series of increasingly bizarre media appearances until, in 2002, some genius at the Paramount Comedy Channel had the bright idea of hiring them to host “Neil & Christine’s Cheech-and-Chong-a-thon”.

These days, though, there do seem to be second acts in political lives, no matter how disgraced you make yourself, and in 2011 Hamilton joined UKIP. In 2016 he was elected to the Welsh Assembly, and swiftly became the party’s leader there. That should give you at least some sense of the sort of person who would file an official Ofcom complaint about the political opinions of a bunch of literal kids. 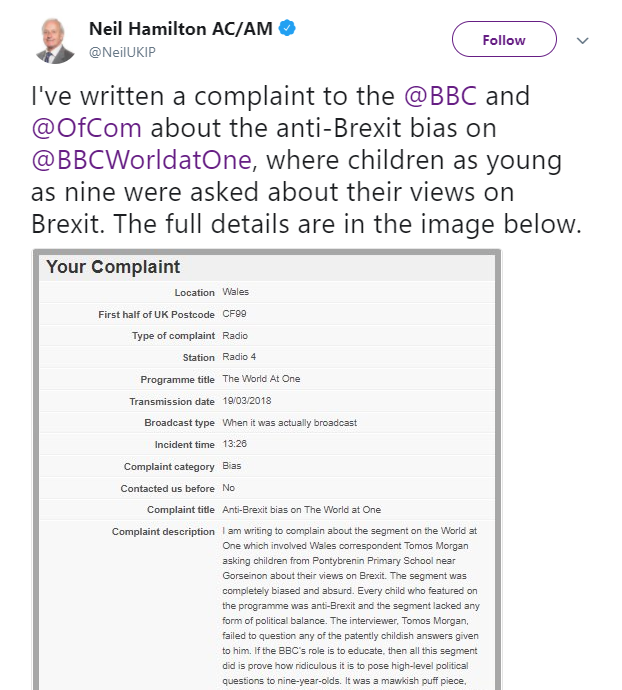 The complaint follows, with my annotations.

I am writing to complain about the segment on the World at One which involved Wales correspondent Tomos Morgan asking children from Pontybrenin Prime School near Gorseinon about their views on Brexit.

“Tomos”, eh? Not “Thomas”, you notice. “Tomos”. Suspiciously foreign, that. Doesn’t sound English, that’s all I mean. I’m saying nothing.

The segment was completely biased and absurd.

Two adjectives that could of course never be applied to either UKIP or the Hamiltons, shown here opening Erotica Manchester 2004: 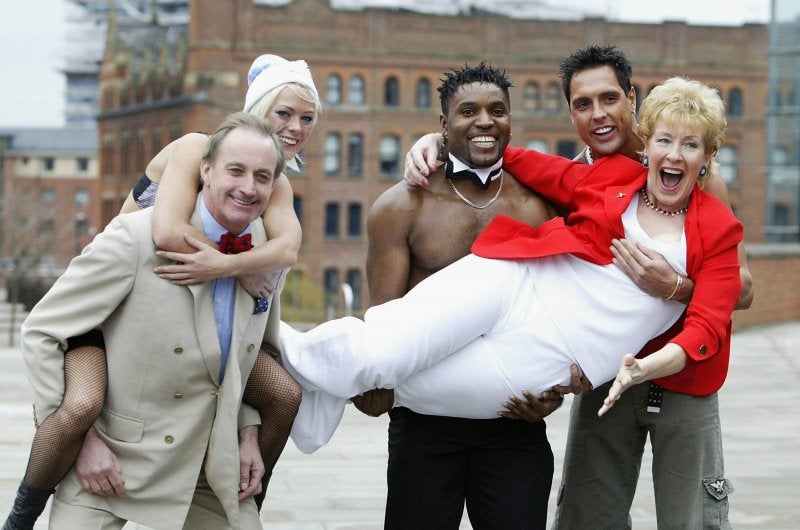 Every child who featured on the programme was anti-Brexit and the segment lacked any form of political balance.

Poor show on the part of the researchers not to provide balance by interviewing any pro-Brexit children. Did they ask UKIP for a spokeschild? Did they? No, they did not.

The interviewer, Tomos Morgan, failed to question any of the patently childish answers given to him.

If the BBC’s role is to educate…

…then all this segment did is prove how ridiculous it is to pose high-level political questions to nine year-olds.

It was a mawkish puff piece, playing on the emotions of the listener in order to support the Remainer narrative that the nasty Brexiteers are stopping our children from being able to play with their friends from abroad.

I’m not sure that’s a “nasty Remainer narrative” so much as “a natural result of revoking our children’s rights to live and work in 27 other European countries”, but there were are.

According to a Brexit survey by TES in 2016, 75% of teachers supported remaining in the EU. Given this fact the dangers of bias and indoctrination in the classroom are high, even if done unconsciously.

A UKIP representative on every school board now! That’ll soon sort out these thought criminals.

There was no mention of these studies in the reporting or any angle of criticism for the proposals.

“So, Simon, why are you upset by Brexit, do you think? Is it because you’ve been brainwashed by your teacher? Is that the reason, Simon? No don’t look at her, just answer the question, Simon. SIMON I AM TALKING TO YOU.”

What is the BBC doing to challenge the Welsh Government’s plans to question children as young as seven about their views on Brexit?

The journalist should have asked Children’s Minister Huw Irranca-Davies about this policy and presented a balance of arguments for him to answer.

Pro tip: journalists love it when disgraced politicians tell them how to do their job.

By asking children questions about Brexit, the BBC is tacitly supporting the policy of the Welsh Government while providing no arguments against it.

It’s weird, because when the policy in question is “Brexit”, Leavers are quite in favour of the BBC providing no arguments against it.

The programme demonstrates an abject failure to support the BBC’s editorial guidelines on due impartiality.

And all for want of a pro-Brexit spokeschild. Poor show, auntie. Poor show.

That’s where the statement ends, as it happens, and I feel a bit deflated. It’s all very well mocking a disgraced former minister for writing an official complaint accusing children of holding childish opinions. But it doesn’t really go anywhere, does it? Once you’ve done, “Haha, look at this weirdo” there’s not really anywhere to take it.

So in lieu of an ending, here’s a picture of the poster for the 2011 pantomime at Kettering’s Lighthouse Theatre. 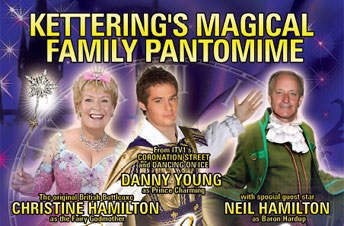 “Baron Hardup”. After the bankruptcy that must have really hurt.