Aww. It looks like those bigoted boys of Brexit over at Leave.EU – the unofficial Leave campaign backed by Nigel Farage and co-founded by Ukip donor Arron Banks – are trying to be progressive.

In a tweet attempting to condemn anti-Semitism on the left, the group has accused Labour of writing off Jewish voters – in favour of Muslim support:

“Is it any wonder that Labour can’t be bothered to deal with the disgusting antisemitism in their party when they are so reliant on the votes of Britain’s exploding Muslim population? It’s a question of maths for these people, not justice!”

This perky piece of prejudice is then followed by a both morally and aesthetically dodgy graphic, depicting Labour as a seesaw tipped towards “three million Muslim voters” and away from “300,000 Jewish votes”. 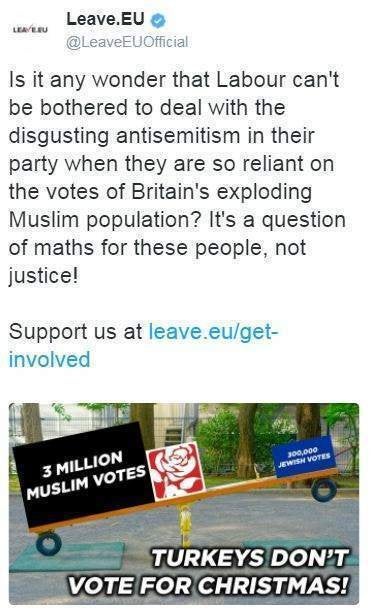 Hmm. There are just SO many problems with this, your mole knows not where to begin. Firstly, it’s disgustingly divisive: suggesting Muslim voters would be attracted by a lax attitude towards anti-Semitism, and that Muslim and Jewish voters’ interests are mutually exclusive.

In trying to score points over racism, the group has seesawed towards racism itself.

“This is horrendously racist on so many levels namely suggesting that Muslims are not horrified by anti-Semitism,” tweeted the Labour MP Jess Phillips.

Banks insists he’s “not suggesting all Muslims are anti-Jewish”.

“As a Jewish Parliamentarian, I demand an apology from Leave.EU for this incredibly Islamophobic tweet,” says Alex Sobel, the Labour MP for Leeds North West, who backs the pro-EU Best for Britain campaign.

“This is emblematic of the cynical, dog-whistle leave campaign that divided the nation and fuelled violence and hatred.”