The pitfalls of the Tories’ confidence-and-supply agreement with the Democratic Unionist Party are now clear. The latter, who Theresa May paid £1.5bn to be her parliamentary allies when she lost her majority in June’s election, will be voting against the government this afternoon.

The DUP will join Labour in opposing the government in two opposition day debates today, on NHS pay and tuition fees.

The Prime Minister’s partners aren’t breaking any rules. As is clear from the terms of their pact, the DUP only need back the Tories on the Queen’s Speech, Brexit legislation, questions of national security, budgets and confidence votes. Basically, votes that could result in the government falling if defeated. 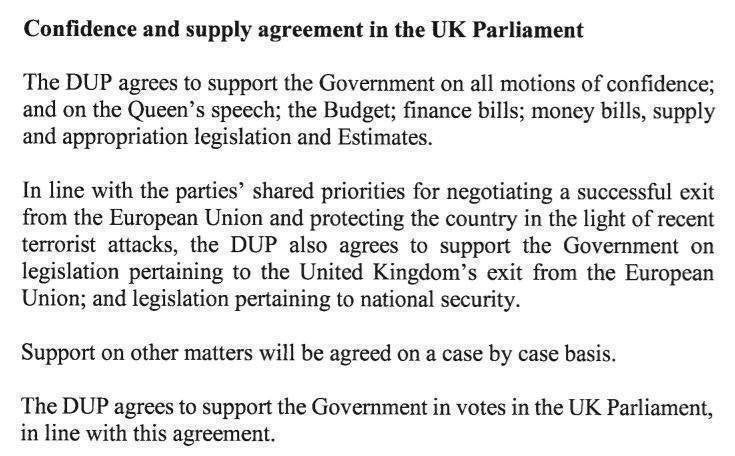 Opposition day votes on the subject of the health service and higher education aren’t part of this, so there’s no official betrayal going on here. As my colleague Stephen pointed out when the deal was being negotiated, the Fixed-Term Parliaments Act’s narrow definition of confidence votes makes it far easier for the government’s confidence-and-supply partner to defy it.

Now that it’s happening, we see how this weakness will result in repeated blows to the government’s reputation. First, failing to guide their allies through the lobby alongside them – whatever the vote – exposes the Tories’ diplomatic shortcomings. And second, opposition from the DUP will always act as a reminder of their precarious hold on power. Yes, they’re being propped up – but their crutch is not necessarily a sturdy one, and can be borrowed by the Labour party at any time to beat them with.